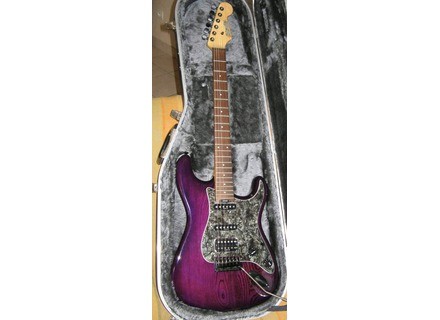 toto2000's review (This content has been automatically translated from French)

Blade Austin
I had for several years a Blade Texas Deluxe, and I exchanged against a Blade Austin 1993, etched, showing the beautiful wood used for the body. My guitar is the one that appears on the photos in the "media" of the brief on this guitar on Audiofanzine tab.

When I decided, I plugged my Deluxe Texas and Austin to turn on my two amps, in clear and distorted sounds with and without VSC (the preamp made in Blade), etc.. The sounds are close, very good, but not identical. The Austin does not have the VSC-3 with its three-position connector, it has a push / pull on the tone knob. In all cases, the sounds are great, I also had a U.S. Standard Strat 1981 for many years, I had finally sold after having the Blade Texas Deluxe hands, who buried all levels (violin, sound, handle), if, if! A Korean guitar 650 euros which buried a U.S. Strat 1200 ... I have thought that after having had the hands to compare. Back to Austin. The clean sounds are very "Blade" with a humbucker that has the potato. The boost / active is very efficient and allows repeated for example, by a simple support, from super clean sounds (on a tube amp) to crunch well supported just by pressing this button. And the sound is still super rich in harmonics. Texas Deluxe neck pickup + boost on serious allowed to have a clear sound approaching the piezos, there is no longer the sound, it&#39;s a shame it has interesting thing: a guitar that potato ... that the Texas Deluxe was struggling to do. The Austin is more like a music man active blades as "hi-fi" ...

Level violin is the range above input ranges 2000s. Vibrato is the same as the RH-2, it is supposed to better reflect the agreement. This is a classic six points, but frankly, I shot with two guitars (Texas and Austin) and in both cases I did not detune. The tuners are Sperzel locking of the same as the RH-4, so the high-end home Blade.

What really made me crack is absolutely impeccable violin and sound and especially aesthetic wood stripped below. See photos, the wood grain is absolutely beautiful.

The handle is very comfortable / fast, thinner than the U.S. 81 stats I had. My guitar is set but the action is not as low as my Les Paul Custom is really feeling the fender. Classic ergonomics stratocaster, heavier than a strat guitar, but not much (nothing to do with my Les Paul) ...

The sounds are all very good, I tested on a Marshall JVM-410 body double and a Mesa Boogie 50 caliber. I like comparing an Epiphone ES-335 made in japan / elitist, a Les Paul Custom Lollars equipped with microphones and U.S. 60th anniversary Telecaster. This guitar does not have to blush. And by far my favorite memory to my strat U.S., I think 81 years was not a good year for Fender ... Whatever micro selected with or without boost, it sounds. Nothing to say ...

I play classic rock, but I like to yell amp from time to time on the canals of saturated ... I tested the sound clean / crunch / distortion, I&#39;m not go to metal / metallica etc ... I do not think the guitar is made for it. In contrast to classic rock or are looking for the "strat" ​​with greater opportunities / wider, this guitar is impeccable. I play in effect usually just reverb amp and arranged various channels. No pedal.

The clean sounds are exceptional, and the crunch / hendrixiens very good too. For fat sound on the double, that&#39;s all good too, but still no possible comparison with the fat sound and sustain of my Les Paul.

The sound of this guitar has a bit more personality to my taste than the Texas Deluxe of the same brand, but I nitpick ...

I&#39;ve had a few days, but I&#39;ve done with rehearsals. I had a bunch of guitar before, including a Blade Texas Deluxe Strat and a U.S. standard 81 in the list of comparable guitars. I bought it on a whim, attracted by its looks and already very fond of the Blades.

What I like most: the look, the violin, the sound. The total what!
What I like least: nothing yet ...

Yes, I do it again this choice without hesitation. I added that I had several bad experiences with Fenders ... my strat U.S. 81 I was never really liked (handle, violin, mechanical sounds, it all fell apart when I had a Blade hands) and my 60th anniversary telecaster paid dearly new in 2006 I had to change the handle which has twisted and made the wrong guitar. My luthier (guitar optim Chateauneuf fat) could never catch up with the truss rod, so we ended up on a Warmoth neck (guitar and saw ...). So Fender and quality assurance, for me, at least on non-custom shop models, that makes two ...

I will not put notes on 10 because there generally must be back ... I do not have the guitar long enough. But aside from my other guitars, it does not have to blush. My favorite is my 1977 Les Paul Custom, which is my # 1 guitar, but this one I really like too.

See all 6 photos of Blade Austin »