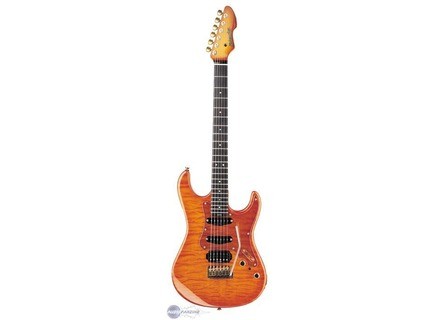 California Custom, STC-Shaped Guitar from Blade in the California series.

Blade California Custom
5
BLADE is a brand of guitar SWITZERLAND dveloppe by GARY LEVINSON brevte which under the name of technological innovations (microphones, prampli active ....) vibrato, his crneau always is stratum, the copy, the amliorer ...

vibrato: it is then the class: it can drop, and even pull (2 tones 1 / 2 !!!), without moving, but you can also play shooting double note without he dsaccorde (IF !!!), it is a system that spcial sign Levinson, and no bigger than a standard Fender vibrato, not a gas plant as floyd. on this one the hat, I want the same scratches on my future, please left-handed.

= ah ben mics as a cl is complicated, those who know BLADE know what it is, for others, open your eyes:
2 singles, a double bridge, which splits with the knob of tonamlit push-push (not push-pull, galre, as the beast on my lag, still seen) and an active prampli ( 9Volts stack), with 3-band, mid, treble, bass, (3 screws on the rglages dosdu body, controlled by a switch between the three positions knob Volume and Tone. a 5-way switch micro pr .

The handle is a rgal, rather late, affects virtually flat trslgrement bomb, the strings spaces, quite frets Paisses: it should play a more rock, metal, but is to reggae, or funk, has more fans of blues enthusiasts crushing SRVanien (we say hendrixien well, right?), then yes IDAL for a single player game speed, I would say it&#39;s his best cr neau

Access in acute trs is good, as we see often now, the heel of the handle is despaissi and Reduces heel plate (at an angle, not square)
ergonomics is impeccable, trs good balance, it just PSE, Masi goes, it&#39;s not a Les Paul (the guitar that you disassemble the shoulder)

find a good sound with this guitar is not hard, but we are trying adpend sound, there are sounds which can be found quickly plsu taking another guitar. Let me explain:
A model is like "Super Start" c - d a strat modern, with a double that dpotte (with distortion) and simple that can make agreements or arpges impeccable (in clear )

So we get the lot, not all but many.
We already saw the micro config, we will examine the use of active pramp with mini 3 position swich;

center position, it is inactive and there is a config type Start with the splittable double, single, the output level of the microphones is equilibrated. is a sound strat rather modern type, a little cold, not built for the blues, but trs own, ideal to go into effect, or play funk, reggae. he may be accused of lacking warmth or personality as it gots. It is perfect for agreements and arpges

down position, the switch turns on the boost rglage of mediums. the screw on the back of rgler is 0 10 with a mini screwdriver. instructions for example rglages is also provided.
has really changes the characters of the microphones, I found much to boost the double. on simple, I find a drooling and imprcis (I got), and compared to a stratcostaud the SRV or Jimi or is felt well Always agu and roundness, but good we can do something when even.

the top position, the switch activates the rglages the bass and boost agus
is the number of choices, one with a dominant low and more or less agu, or vice versa, or even the 2
Personal, I stopped on a sound reminiscent of a telecaster pluttagu

in fact there normment possibilities with this guitar and everything is a matter of dosage and choice of amps.

It lends it to me for 2 weeks
I love the big sound, and 2-3 extra practice tips, vibrato, pull pull split, a beautiful violin, the ease of playing, it&#39;s mouth, the possibilities of prampli but refine ...

the default is only my opinion a lack of characters. Conversely, it will be a quality for those seeking a versatile guitar or a guitar studio. trs otherwise good for a directory-style variation on o must be able to do u little bit of everything without sounding too typ.

the report seems to me the correct price quality for its price new, but without the PRS and custom shop Stratocaster taient trs well above rates for the same price range, however INTERESTED cte for its secondhand (1000 1500, seen on the forums), is the most INTERESTED