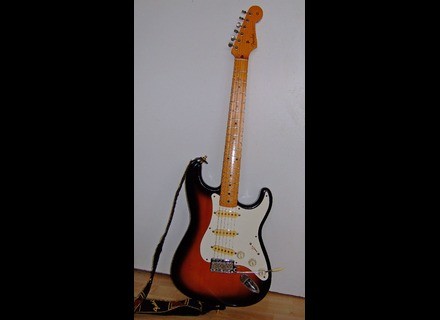 Jiloo_music's review (This content has been automatically translated from French)" Beautiful violin, a true 54"

The peculiarity of the Strat 54 is the handle Soft V, a little thicker than the C 60s, and therefore a little less comfortable and fast, matter of habit.
The 7.25 radius, I'm used to with my 62RI, but it's a little less easy for bends the modern 9.5-inch radius (or even 12 "or even offset 9/14")
Potentiometers and selector are very soft rotation, accurate and effective.
By changing the pickups, I changed the switch to a Fender Classic, but not the knobs that satisfy me completely.
very light weight is very comfortable.

I wanted to complete my 62RI Strat pickups equipped with Irish Tour for the Blues-Rock,
a Strat to the most original sounds, clear and slap to play the blues:
Japan 54 microphones give this classic sound but with a lot of bass and volume;
so I took a promotion to equip with Fender Custom Shop 54, which give a more balanced B / M / T, better defined, and making better highlight the intermediate positions 2 and 4, with richer arrangements, but the volume is a little low.
With Ibanez TSA15 blues sound is superb enough velvety,
Vox NT2 head with the sound is slamming, which brings me to drop the treble;
the built-in Ibanez TS9 well preserved rich tone and brightness, gender Fender Blues Junior but slightly less acute.
the body ultralight Ash gives a surprising resonance and sustain, even longer than my US 62 RI alder; my Mexican pales in the face of this quality!

I acquired it recently, I just change his pickups for CS54,
so I have not done the trick, but it already gives me exactly what I was looking in sound and style;
I wanted a typical Strat 54 (Ash body, soft V neck, slap microphones 2TS, maple fingerboard).
I was very disappointed with the quality of the violin Fender Classic Series 50 while the sound was not so bad,
Fender 60th Anniversary US do not like it because of its gold hardware,
American Vintage 54 is great but too expensive for its definition,
and Custom Shop is not in my budget:
this made in Japan with the addition of 54 Custom Shop pickups and a Fender hard case, is priced at US 60th birthday but more faithful to the original definition, and with a violin in the level of American Vintage 54 almost 2 times more expensive.

ricoute's review (This content has been automatically translated from French)" Happy and famous discovery!!"

The body should be in 2 or 3 part can be seen in the shades of sunsburst fine delineation.

It seemed a lighter than the PC 60's but this may be due to a different balancing hair, anyway sustain iest read well this hair!

Sound fruitier corpulent in the true spirit strat with good sustain and especially balanced sound of each string of not so distant serie "L".

all jazz, blues and rock hard with a good distortion

The game did not come out fingers at all with CP60's like muffled sounds,
there, how they will attack the string with the profile of the finger will make all the difference and the perfect intelligibility even one note out to all parts of the handle without problem

I play and even my little transistos Marathon, which I use as a reference, a big leap in quality of sound, and sustain momentum when there whip it responds

There is no sound that disappoints and even aggressive acute mic on CP60's and without consistency is good!

I tried a stratovolcano MIJ Version 2013 New means a disaster, not his strat, a articial sustain (resonance) and a completely grain cahngeant with distortion

The R / P / q is very good, the reputation of Mij is once again there.

I obviously do this choice, but almost mij that secondhand (except the 2013 version!) Depart quickly, a ri 1972 had also tried but I had more vintage especially less musical and versatile démarquais is not a sound quite the style of cp'60 I had to end in horror!

cedart's review (This content has been automatically translated from French)" Very special product ...."

The handle is very nice although the shiny patent is a bit uncomfortable but polished power of play ...
The ergonomics are excellent (that of a Start ...) access to acute is easy.
The sound is very good micro-Di Marzio is a warm vintage but without much background very nice clear sound in full.
Great versatility thanks to the 5-way switch.

Given the wide range available it sound perfect: I play more blues or indie rock or funk.

The sounds range from crystal (bridge pickup) in hot fat (neck pickup) and various neutral shades offered by the central micro and these different combinations.)

Ideal in virtually all the records just to apply the proper effect.

I use it for a month and VSP editions have since become a holy grail since there are all model ('57, '62, as well as Jazz and Precision Bass), edited with few copies they remain affordable in comparison US and a more sophisticated microphone with the latter.
Raport money very good.

This choice I would do without hesitation .......