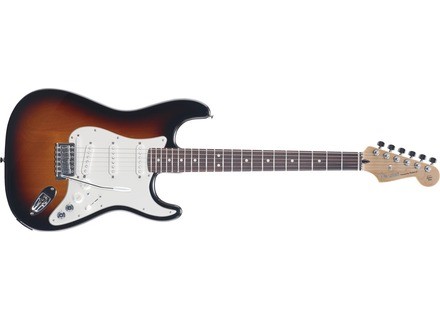 Fender G-5 VG-Stratocaster
4
The VG Stratocaster is Fender's take on a modeling guitar. Line 6 had a hit with the Variax and Fender fired back with the VG

A friend of mine needed some PA gear. He had the Strat and I thought it'd be worth it in a trade. Used they go for around $900, brand new I am guessing they sold for $1300 or around there.

There is no outboard gear or special cable needed to use this guitar. You can use any old instrument cable. I know how frustrating it is to get to a gig and realize you forgot your specialized midi cable!

The Open G, drop D and Open D tuning modes are awesome. They are very accurate and you don't even have to touch the tuning gears.

The modeled guitars are kind of lame in my opinion. The modeled strat vs. the bypassed strat is not very different. The Tele does not sound like a tele.

The 12-string mode I cannot hear a darn thing when that is on!

The body is ash, the neck is maple with a rosewood fretboard. It has all the regular features of a regular Strat; the 5-way switch, single coil pickups and standard American tremelo. The knobs are Master Volume, Master Tone, Tuning Mod button and Guitar Mod button.

I would recommend buying this guitar to have a Strat and sort of treat the added features as a bonus, other than that I feel you may be a little let down as the modeling effects other than the handy tuning really didn't do anything for me.

Younger's review (This content has been automatically translated from French)

Channel trs enjoyable and really fast.
Access in an acute very easy as in many strata.
perfect balance and form typical Start
The sound is what is key in this instrument: stratocaster mode, there is absolutely quality micro deluxe with all their attack. Numrique mode, you can choose between: a stratocaster, a tlcaster, a HH, or fender acoustic.
A modlisation types of guitar truly remarkable quality. trs a good job

This guitar can play sounds really diffrent without changing its Manir play. Trs sound bold for HH, or his foil in the stratum. The numrisation also allows to Wipe grsillement electromagntique can be submitted at while recording.
Trs more importantly, the tuning Systm. it can drop in to agree, but also in modal baritone which is a bonus monster. numrisation the 12-string is also trsraliste.
I cheat a can for model amp because I use a line6 Vetta II which allows me to have all the sound I want!

I use it for four months, I find this guitar like a Fender and Roland Russianness for returning to the field of numrique o dj Line6 had dvor the market. I think the fans will not be the fender by MODEL trs well finished with quality sound without Previous to a single instrument.
A BMOL which does not allow me to give up, a battery operation that runs out rather quickly. galemenent Lumire blue and a really strong for a concert. inaperu it does not live for a black scne!
For the price, it's an excellent quality price 2200 euros.
Did you find this review helpful?yesno
»

philcl25's review (This content has been automatically translated from French)

Fender G-5 VG-Stratocaster
4
I bought the guitar fender vg since March 2007 and I give you my opinion.
It is a wonder at all.
The guitar in it even a Fender Start and the same the only diffrence the deluxe modlisation.
Before j'tais have to have four guitars on scne today is no longer the case.
Electro acoustic sounds are great but with a neutral amp.
The sound of the tlcaster and perfect with an already overdriven amp for rock and blues.
The only default of this guitar and the battery consumption and high 2 h together any more.
I suggest you buy it if you like me to use double-quality capacitors (4x2) with a quick charger.
The fender and manufactured in the United States

The handle is nice but you have to rgler a luthier if you want a game enjoyable for a new guitar is not forcment rgler correctly.
The sound of dpend rglage.

I play on the fender vg since March 2007
I love all the sounds of this guitar except the consumption of batteries rechargeable batteries do.
Yes but the advantage is being able to replace my tlcaster my Ovation etc ...
Trs CHRE not because when you have aprsrflexion test.
Yes, without one second hsiter
Did you find this review helpful?yesno
»

Fender G-5 VG-Stratocaster
4
Short story: no need to introduce the Fender Telecaster Clarence Leonidas (Leo says), genius of violin musician but not a dollar! Roland is against most famous in the world of synthesizers. In the 70s, the idea occurs to them to develop a guitar synthesizer. They are therefore the guitar organ Godwin (1976) and in 1977 released the GS-500, Les Paul type guitar plugged into the GR-500, big synthesizer. In the early 80&#39;s, Roland recidivism four guitars, a bass and three pedals. Not yet fully developed (latency period between the attack of the strings and the emission of sound), the third gnération is the most complete ... and more futuristic: the G-707 and GR-700 pedal huge 12-kg lots in 1984. Success is not to go, but Roland has persisted for a simpler method: the Virtual Guitar (VG). A microphone pickup is placed just under the strings of any guitar and connects to a synthesizer. Roland, however, keeps the idea of ​​integrating the microphone to a guitar and VG approaches Fender. Will be born in the first Roland Ready Stratocaster ready to connect to a syhtétiseur Roland. Then the VG Stratocaster guitar modeling, which is strongly reminiscent of the Line 6 Variax, and offers different models of Fender guitars with alternate tunings.
We keep of course the eternal line of Fender Stratocaster, released in 1954 with an ash body (alder and 1956) and a maple neck accompanied by his touch unreported (rosewood fingerboard appearing in 1959). The two-tone sunburst finish early will be complemented by colors "custom" in 1959. Drawing on original but not eternal ... head. In fact, hard to believe that Leo has not inspired on his head Telecaster guitar made by Paul Bigsby for Merle Travis in 1948! Bigsby has can also turn inspired the first of Martin guitars in the mid-19th century, before it adopts the heads that we know well today. CFMartin, meanwhile, was just copy the headers Johann Stauffer, a well-known German maker, with whom he worked before emigrating to the United States ... As for the body, its shape is actually due to the remarks of the guitarists on the Telecaster and Leo has taken into account: double cut for better access to acute bevel ergonomic ...

It&#39;s a stratocaster: everything has been said about the playing comfort, the handle, access to acute, shape, weight, content ...
The sound? it&#39;s plug and play.

I am also proud owner of a Line 6 Variax 700 with its indispensable workbench (customization tool).
The sounds found on this layer are very honest modeled: Start, Tele, humbucking, 12-string, acoustic + alternate tunings. It&#39;s versatile high quality! You can play any style of music: pop, folk, rock, metal, blues, ...
But the problem is not there. Indeed the comparison with the Variax needed.
- The price: 2,000 euros for the strato, 1,500 euros for the Variax workbench +
- Quality: the beautiful work of two sides, the layer has on the logo for it!
- The models: many more on the Variax! Start, tele, les paul, firebird, ES-335, Gretsch, Rickenbacker, Martin, resonator, banjo, 12 string, Hawaiian, ... you can do everything (or almost). Moreover Fender does not specify exact models were modeled. Line 6 against with the originals are clearly detailed (although emulation is not always 100% true, this leaves dreaming about the different models and mythical).
- Opportunities: no customization possible on the stratum. Against by the Variax, the workbench provides a virtual luthier shop where all combinations are possible (body microphones (positions, angles, types, output levels), fully customizable alternative tunings of 2 octaves, ...) and 100 memory available on the guitar! What extend to infinity and the models available with a quality appointment.
- Much more than the stratum: this is a real stratocaster in liabilities associated with modeling. The mixture between tradition and modernity. By the Variax is against "a guitar modeling", without character. It sounds like whatever you want, but not as itself. This is not a "real" guitar in the traditional sense. No visible microphone (it&#39;s weird anyway). In short, is a "real" guitar? For me, yes, but not for everyone.
- Other black dot next to Fender: power only by batteries (LR6 4) which is limited autonomy (4 hours) on the Variax can be fed via batteries or via transformer provided (jack-jack cable used for audio and power), in short demand.

So for eight sound quality (except for some noise) but not 10, as a customization would have been welcome, and because the models are of unknown origin (the Line 6 Variax has been there and immediately set the bar very high) .

Recently acquired, I am delighted. It is a real liability in strata with character all its own, and active modeling are bluffing, to extend the spectrum of sounds and providing a welcome versatility.
Unfortunately, the Line 6 Variax 700 has been through it before: cheaper, more modeling guitars, better identified (models accurately described), longer battery life and especially with the ability to fully customize his guitar!
If this is your first or Fender Stratocaster, go for it! Otherwise try the Variax workbench, you&#39;ll be surprised and you will emerge probably more comprehensive and relevant!

Did you find this review helpful?yesno
»
Read the 6 user reviews on the Fender G-5 VG-Stratocaster »