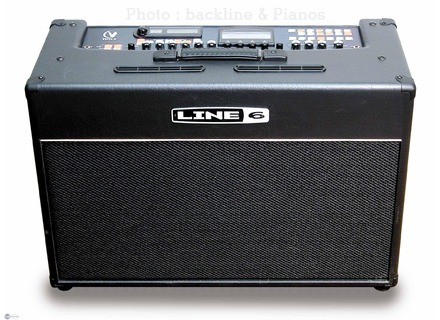 Line 6 Vetta II
4
Two opinions: one very good and very bad, I'll try to give that will

50:50.
This is the simulation reproduce all kinds of sense amplifiers known and famous, all kinds of speakers, effects, microphones ....
The connection is ultra complete, more than enough power, but it is also possible to switch to half power, and lower the master, so to play at home. Also note the presence of a headphone jack.
The adjustment possibilities are legion, which is both an advantage and a disadvantage: it is far from "plug 'n play".
The huge bottom bracket allows you to access all the features you can get on stage and through a single cable: it's great (but it is optional and expensive, for that I will stoop down the note).
Contrary to what I read, the finish is very correct, everything is well put together, not untimely vibration even at high volume. However, the knobs are a bit "cheap".

The manual is clear, simple but well detailed, however it is quite complex to build a sound valid. It is essential to know the sound that research, because if one has to go at random, we will quickly find themselves facing a wall, especially as each parameter is rather effective.
If you like the single channel amp, do not buy a Vetta. But if you grind sound like is the amp for you.

I did that for about two months, and am far from having made the tour. However, I have prepared some basic sounds that allow me to perform in a group. We can, I think, get all the sounds possible, provided not just to review the sounds "factory", saying "it's me ...".
In the group, we are two guitarists in addition to the bassist, drummer and keyboard, and violin, and repeat, do not worry to get out of the mix. I took this amp to be able to leave the bar without heavy artillery (head, effects rack, 2x12, pedals, cables, transformers ... an hour of installation). Once I have tested in concert situations, I will publish, but I do not see why it would pass in rehearsal and not in concert.

We play Hard pulling on the metal, and I use most often guitars with active pickups. It also sounds better with certain guitars than others.

As said before, I did that for two months, and I will state my opinion in a few weeks, especially after public benefits.
I tried've owned many amps (I have two "All Tube" very powerful with big speakers, very bulky ...), and it is really a special case, it has nothing to do with everything I had or I still have.
I love his side "Swiss knife", while one, not so heavy as that, much less bulky than my other configurations and above that can be installed in minutes.
I do not like the (too) many adjustment options, but if we lose because a little time to find the sound, it is recovered then arrived on stage.
Value for money very good in Cygnus.
My conclusion would be that it is very good illusion (yes, we talk about simulation), and that, properly adjusted, it may well do its job in any groupe.Je do not know if I would do this choice, because I like change, but it's a good amp.

Nico66's review (This content has been automatically translated from French)

Line 6 Vetta II
5
Modeling amp.
Power ... ouffff!! laaargement sufficient either to repeat or scene's!
Super simple connection with the pedal that allows comprehensive management of all ... everything!
Amp very comprehensive with a number of speakers, amp heads and impressive effects!

Let's say that by fiddling a bit, we come easily to take charge, but is easier still ...
it's not just a Marshall or the volume is adjusted the loop and equalizer ...
But the enormous possibilities it offers are incredible, and we manage to get pro-quality sounds quickly.

Quite honestly, I'm a fan of this amp.
I could compare it to a Marshall JCM 2000 TSL, a superlead JCM 800, JCM 800 a superbass, a Fender Twin Reverb, a Mesa Musicman a correction, and without hesitation, for j'obpte VETTA II
from all over the jacks for effects loop, power etc ... many
Here, an amp, pedals, a power supply for everything and a cord to connect the amp to the pedal.
Simple as that.
I also use it in home studio for recording, and there is happiness. Exit through the direct outputs by simulating the transplanted microphone of your choice (Neumann SM 57 ,...) the inclination of this microphone, the distance ... etc.
pbtenez and you live on live sound monitoring you have to mix! and this without having to be careful not to sneeze while recording etc..
No breath, nothing!
The crystal-clear sound of your guitar or nag.
Also ideal for the stage, I use it as a return, I go out and live on the table in stereo!

The bomb! For me, there is nothing better!
It has the merit of being clear there either?
It'll be two years I have, and I would not change for a VETTA 3 if it comes out one day

frapana's review (This content has been automatically translated from French)

the config is intuitive and friendly, it is possible to concoct some sounds nice, but it is still very far from a real warm sound of light and deep,

some stereo effects are Plutt nice

but overall it stays cool, without relief, given the price of the beast!

much effect, a device that works well under home studio, but other less expensive hardware do just as well and some with sounds good + authentic

OCCAZ bought and sold as dry APRS one month, the report of its quality / price of the beast is not worth the shot

moreover, it is really too heavy and cumbersome,

to get a real sound, we found the lamp with hardware connections, as Koch among others which, with some effects and all at a much LOWER price, get the lamp in all its richness of its sound!

for sores fortune without ears .....
which authorizes me to say that Line 6 is the music that TF1 is culture and education .... it's expensive to pump money and has produced a race to the bottom. ...
avoid!


3 of 12 people found this review helpful