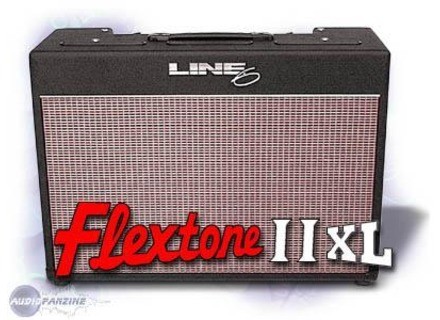 When Line 6 amps first came out, I was not impressed. When the Flextone series was released and I finally tried one, I had to have it. I get tones from Brian May's AC30 TB, to plexi-tones and more. The salesman told me he had a Marshall and didn't gig with it anymore as the tubes were too tempermental (take too long to warm up and get "sweet" as well as needing to be really juiced up to get that tone).

You really need to read the manual and realize that not only can you set four pre-sets, but you can also set a defined tone/volume/drive/cabinet/etc for every one of the 32 amps modeled. That way, you can instantly get that sweet sound you like from each setting without fiddling with it. This also applies to the 16 effects settings.

Be sure to purchase a MIDI cable for your amp to talk with your PC. That way, you can access lots of other settings (pre-delay on chorus, reverb diffusion, etc) that cannot be altered from the panel.

The low end on the amp was a bit muddy. I never could describe it, but I could always work around it. Then I got the upgrade chip to v2.4 of the software. No more muddy bass!

I wish the on/off switch were somewhere else too. I have heard of someone who had theirs break off, so I purchased the cover for it and worry less.

Also, you cannot hook up an external cabinet for use with the internals. I know you can fry the amp if the speaker loads are not right, but it would be nice if you had another 2x12 cabinet and could run left to one cab, and right to the original. Then I should have purchased the Plus instead of the XL!

Amp is well constructed. No complaints.

Many people are offering modeling pedals (what a waste, unless you are running straight into a board or PA). Others are making modeling amps too. While I have not tried other modeling amps, I have played enough of the real deals in 27 years of playing to say that the Line 6 gets them all close enough to satisfy me. Face it -- not even two of the same amp model sound the same, so don't say "It doesn't sound like a real _____"!

AL_WNTR's review (This content has been automatically translated from French)" Very versatile,"

Petty detail: The cable connecting the footswitch to the amp is a Line6 specificity. A kind of RJ45 cable, but you must use the model Line6 otherwise it does not work. I lost mine after a concert. In recommending a new lease took me and cost me a look: 25 euros for cable and 3 months of delivery.

The amp is incredibly versatile. With a few hours of practice to go around and effects simulations onboard, we arrive at more or less any sound: the sound crystal clear how Roland Jazz Chorus to the saturation of a thick Mesa, passing through grain type bluesy Vox, hyper accurate way of crunch or Fender distortion rock to Marshall.

The manual is super clear. The effects are convincing.

Hyper full. Stunning sound reproduction.
I used it mainly in rehearsal and on stage in two groups: one giving rather in the way emocore At The Drive-In, the other playing on much heavier loadings to Neurosis.
I used mainly simulations and Marshall JCM Mesa Rectifier. The illusion is perfect.
I play a PRS SE Standard and Standard Telecaster.
With the Tele, I am also amused to look for more bluesy or country grain with simulations or Blackface Fender Twin Amp. As for the other: it is ultra convincing after only a few nitpicking.

Power level: no complaints. it goes very hard. I had added an extension speaker cabinet Line 6. Ridiculous detail: the baffle is smaller than the amp. So, aesthetically, it gave an odd effect. But in the rendering, it was huge.

I used it for 7 years before I went to a stack of pro tube (in Engl Preamp, Mesa Poweramp 4x12 Celestion V30 and a yell to the beast).

He made excellent services, but these models often full digital, he ended up slamming into repeats. The amplifier stage dropped. One must recognize extenuating circumstances: I played for years with the volume of 7 to measure the double full-stack on the other guitarist. it does not forgive. But after seven years of loyal service, for a price after all quite ridiculous, I am more than happy.

I dismounted to retrieve the preamp that works very well. I use it as a Pod. And baffles are nickel: they will serve me to make me a new box 2x12.

This is clearly the kind of amp to buy used instead. it's always been the problem of Line6: the range is renewed very quickly. The models are quickly overwhelmed and quickly lose their resale value. That's all beneficial for those who prefer the second hand

If it again, I would not hesitate. Every amp I farted (the previous was a Peavey Bandit who also grilled after many years), I always go upmarket. This has made the job perfectly.