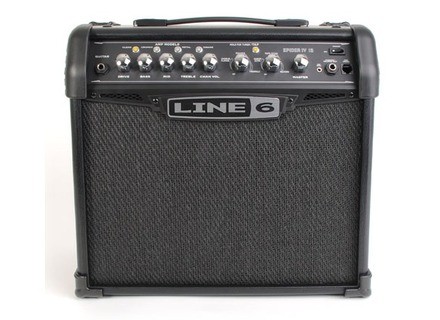 Line 6 Bends Over Backwards For V4 The POD inventor comes back - for the fourth time - with its Spider modeling amp range. This time around we deal with the small, 15-watt combo which offers six effects, four amp models and some nice additional functions for less than $100. So what about the sound quality? Read more…

Line 6 Spider IV 15
3
This little amp is nice priced and convenient amp. Much like the 75 watts it retains most of the features from the original amp modeling amps that line 6 starting making years ago. Now they have updated it to the modern times and it sounds not have bad. The tones of this amp I like a little better than the original Spider amps that I was previously used too. Line 6 has upped their tones in these new amp models with better tonal response.

I have always had a problem with amp modeling since they don't sound anything like a real amp. Don't get me wrong this unit will not sound like a real amp. But ti will get you in the ballpark of how they should sound. This amp is not designer to rival real tube amps but give a learner or beginner a great start at learning the electric guitar.

At new they come in at around $99 which is a steal for what it does. This amp is marketed a the beginning guitar player who needs an amp with a load of effects and options. I wouldn't recommend this to anyone trying to start a band or responding to a craiglist ad looking for a guitar player with a lot of sounds. So for the learner player this would be fine.
Did you find this review helpful?yesno
»

I bought this amp to use as a home practice tool. The mp3 feature was a nice feature since it allows me learn cover songs easily without needing to sit at my laptop. It's plenty loud for a small amp. I'm not so sure you could use it for most gigging applications but for the quick, kick around gig, it may be suitable.

Plug in, turn on and start turning the dials...experiment. In my case, I found about 50% of the sounds are good, 25% are just ok and the other 25% were pretty bad. I play a 100 watt tube amp so that may be why I've found myself fighting this amp. I'm used to a bigger sound. when an amp sounds good, I tend to play much better. My playing through this amp is average, which causes me to not play it that often.

The 4 channels are laid out like this:
clean
crunch
metal
insane

The clean channel gives a surprisingly warm tone. Add a little chorus and reverb and it is VERY usable.
The crunch channel was just ok for me. It lacked bite and didn't give enough of a punch.
The metal channel is where I spent most of my time. You can actually dial it in for a nice basic hard rock tone or a crazy lighter metal tone.
The insane channel is just that...insane. Tons of gain on tap here. It becomes really compressed sounding and sounds like it loses some mids.

Like I said earlier in this review, I only bought this to use at home sparingly. In that regard, it is adequate. This would be an excellent starter amp for a young person who is big into rock/metal music and doesn't have the budget to go for something a little better. It will more than do the job and would work great for someone who is starting guitar lessons and needs something to practice on.

The sound quality is what you would expect from a lower level Line 6 product. YGWYPF - You get what you pay for. I can't complain though as I only paid $50 for this amp on the used market. It serves its purpose for me.
Did you find this review helpful?yesno
»

ricou le morfalou's review (This content has been automatically translated from French)" Opt for the VOX AD15VT!"

Line 6 Spider IV 15
2
Modeling amp transistor.
15W power over a bowl of 8 inches.
Some included effects (reverb, chorus, tremolo)
Little bulky to carry around easily amp and can play at low volume at home (this is also why I bought it)

The sound is very clear in the way, and crunch, lack of bass, lack of punch. Metal and insane, the sound is sick ... The bland thing that destroys you well eardrums ... Good at the same time the price should not be too demanding ...

A bad purchase ... In the same price range and product prefer Vox AD15VT (I have one and I can guarantee you that it is night and day in comparison)

Line 6 Spider IV 15
5
Transistor amplifier with an extensive connection! power level (15W) is perfect for the home. Modeling, on the one hand, to find the settings for several basic style, which allows not to take the lead if we go from blues to metal. other hand, low-volume, quality is at the rendezvous.

Usage is very simple. Everything is done very quickly. the stuff (setting artist and playback) Line 6 are of good quality.

For me, it's good everywhere! just look a little on the adjustments. on the other hand, when the volume goes up a little, means that it is the modulation. It sounds a bit digital. In this sense, I will not go into rehearsing with. But at home, is the top especially coupled with the small pedal.

I use it for 3 years for home use and I do not change. the price / quality ratio is excellent in my opinion. to note that I have not tried a lot before buying. However, I do it again this choice easily.

Did you find this review helpful?yesno
»
Read the 7 user reviews on the Line 6 Spider IV 15 »