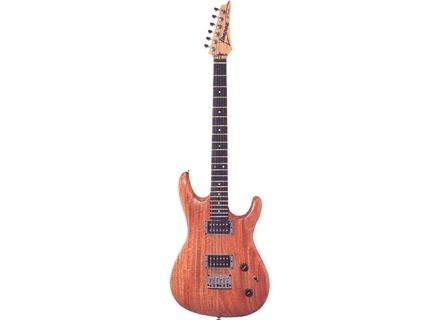 JS6, STC-Shaped Guitar from Ibanez in the Joe Satriani series.

Ibanez JS6
4
Way back when, Ibanez decided to make a hard tail version of the very famous Joe Satriani JS model. Why they made it, I'm not entirely sure. Satch is a well known player of floyd equipped bridges, so it's a bit confusing. The guitar has a mahogany body with a maple neck and a rosewood fretboard, 22 frets with dot inlays, a hard tail bridge, two DiMarzio humbuckers, one volume, one tone and a three way toggle switch.

The guitar was put together pretty well. The guitar was used, so there was some noticeable fretwork. Also, on these older Ibanez guitars, I find that the edges are cut a bit sharper and aren't quite as rounded off as the Prestige models. A quick filing with a special flat bottomed triangle file can fix that. The nut was starting to show some wear, but all of these problems were because the guitar was old; most of these guitars aren't like this when they came out of the showroom floor. The one gripe I have is that this has a hard tail bridge. Why you'd want to buy a Satriani model with a hard tail bridge, I'm not entirely sure...

The guitar sounded pretty good, actually. The mahogany body really adds some depth and girth to this small bodied S series guitar. The DiMarzio FRED in the bridge has some awesome harmonics, and the overtones work wonderful for when you're playing lead tones. I found the mahogany to help beef up the bridge pickup a bit and give it a bit more character. The PAF Pro in the neck is very open, although it tends to be a bit sterile sounding at times. The mahogany helped back of some of those highs and give it a real cool midrange grind that a normal basswood couldn't do. The coil tap in the tone pot adds some real nice single coil character to this, too.

If you're in the market for a hard tail JS guitar, look at the one with the FX bridge. I find that they're much better in terms of overall tuning stability. The biggest thing this guitar has going for it is the fact that it's made out of mahogany and not basswood. However, 99% of the S series guitars are made out of mahogany, so it's somewhat of a moot point.