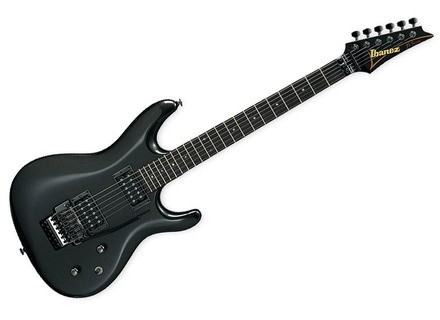 JS1000, STC-Shaped Guitar from Ibanez in the Joe Satriani series.

Ibanez JS1000
4
Satriani, Vai and this other Frippin old guy toured where I live. Of course I was a little impressed. It seemed to me that every time I looked at Vai on stage it was the perfect photo op. Satch... what can I say that hasn't already been said. I loved the tones that he accomplished with such irritating ease, so I surfed for the guitar. I live in RIP OFF England so I was pleasantly surprised when I found the JS1000 for... wait for it, £1089 from imuso.co.uk. Thats £300 cheaper than the stores and loads more than you lucky Americans have to pay.

A beautifully appointed guitar. Stunning good looks, nicely thought out electrics (coil tapped humbuckers, 3 way toggle switch and a high pass filter on the volume pot) and of course soaring, singing, whistling and purring tones (like the master himself... well almost). I love the sound of the Dimarzio Fred and Paf, bridge and neck pickups. I didn't think that I would as I have Seymore Duncans fitted to both of my American custom Jacksons and, well they are scary. I also wasn't sure about the woods used and the neck, which is thinner than the Jackson's. I was wrong to be unsure. The basswood body, maple neck and rosewood finger board combine to create a wonderfuly balanced warm and silky tone with a vintage feel that is very endearing. Don't misunderstand me though, this lady can be a first class B***. The frets are unforgiving to sloppy playing styles (you have to be accurate) this really helps to develope the player and it can really kick some serious butt if you want to push the gain on your amp. I use a Mesa 3 channel dual rectifier and the sound is as sweet as a nut. Buy one.

The cost here in England is stupid. You lucky guys on the other side of the pond pay the equivalent of around £650, I paid through the nose.
The factory set up is strange. Satriani has a really low action set and yet the JS1000 when it arrived had an action like a long bow (you know... Robin Hood Style) A little bit of time consuming set up time is required by the serious musician before you can sample the sound... not really plug in and play straight from the box.
You don't get a hard case as standard (very odd for any musical instrument of this quality), but if you push the retailer he WILL sort you out. Oh and the tremelo arm (whammy bar) bumps the top of the volume pot when the filter is engaged, how odd!!

Ooops! I have already described the construction except for the bolt on neck, I was unsure again, silly really. As for the quality well it's SUPERB.

Buy one and see, especially if you are American... lucky b*******. Lovely guitar in all the important areas. Get a Fat Finger sustain clamp... Satch uses one so it can't be a bad idea.

Ibanez JS1000
5
I bought it from http://www.chrisbsmusic.com

not much, overall this is a great guitar for the money.

Designed and played by the Master of Tone, Joe Satriani, this piece, simply put, is an ultra-modern guitar with a vintage feel.

If you know how exacting Joe is in gettin the best tones in the business, then by definition his signature model has to be a great guitar. Once you've experienced this guitar, you will realize that it was designed to be like Joe himself-capable of out-of-this-world sonic speed, extraordinary musicality, and tone, tone, and more tone

Perfectomundo. Come on Its Joe Satrianis signature guitar. So light and easy to play. Not chunky like a les Paul.

The shape and tone are first class. its simple but amazing at the same time. Fragile, nothing like a les paul. this is a real soloist guitar, a les paul is chunky rough and solo. the js is light soft and smooth.

Ibanez JS1000
5
I bought this guitar from a fellow jemsite.com member who lives in new jersey. I bought one because i wanted one BAD and he gave me a good price for a mint guitar. i ended up paying about 900 including shipping.

i dont NOT like anything, the coil taps dount sound 100% like a single coil but they sound just as good as any other coil taps out there.

GOOD GOOD GOOD..... its a Prestige Ibanez, it SHOULD be built good.

I would recoomend this guitar to any lead or rhythem guitar player looking for a guitar that can really do ANYTHING and do it like it was meant for whatever your doing with it.

This review was originally published on http://www.musicgearreview.com
Did you find this review helpful?yesno
»
Read the 20 user reviews on the Ibanez JS1000 »