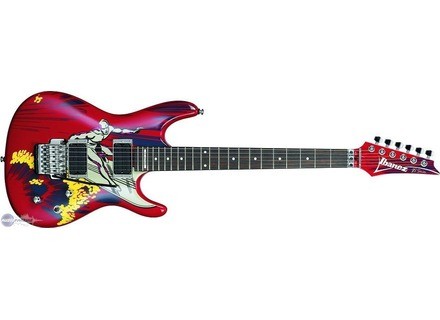 JS20S, STC-Shaped Guitar from Ibanez in the Joe Satriani series.

Ibanez JS20S
4
For the 20th anniversary, Ibanez decided to do a special version of this guitar. It's really the same as any other Satirani signature out there, but this one has the Surfing with the Alien graphic on it. It was one of Satriani's most successful albums, so it was only natural that they'd do that for the anniversary. The guitar features a basswood body with a special graphic on it, a maple bolt-on neck with a rosewood fretboard, 22 frets, dot inlays, Edge tremolo, two humbuckers, one volume, one tone with a push/pull coil split and a three way switch.

The finish on this is great. The graphic looks awesome, and there are no odd lines or runs on this at all. Sometimes you can see where the graphic kinda "ended" or whatever, but this is pretty natural looking. The guitar had the perfect weight to it, too. It was right around 7 lbs all together. The Edge on this is one of the best floyd trems out there. It has locking studs to prevent any potential movement that could harm tuning stability, it flutters great and just feels awesome. The neck on this is your standard neck that Joe Satriani has put on this guitars. It's fairly thin, but it also has a very round radius to it, so it's kind of a cross between a shredder profile and a vintage profile. Very cool.

The guitar has the PAF Joe in the neck and the Mo Joe in the bridge. The Mo Joe is like a modified FRED pickup. You can get these really cool harmonics going on with it, but it can also clean up quite nicely. It has this old school vowely kinda sound that excels with a mildly overdriven Marshall. Tons of character with this. The PAF Joe is like a modified PAF Pro. It sounds very open, but this one has a bit more character to it. I find that notes tend to pop a bit more with this, and they're not quite as linear as the PAF Pro might have been in the past. There is also a coil split on this guitar so you can split the pickups if you want that single-coil kinda sound going on. It's not the most useful thing as the pickups don't split quite as nice, but it's cool on the clean channel or low gain channel.

This is a great guitar, but it costs way too much money. I'm also not a huge fan of playing signature gear on stage, so I tend to stay away from models like this. If you're a big fan of Satriani, I'm sure you'll absolutely adore this guitar. If you're someone who plays on stage for a living, I doubt you'd be interested in this guitar, but it's still a very solid quality guitar. Ibanez makes somes great stuff today, and I recommend checking it out.