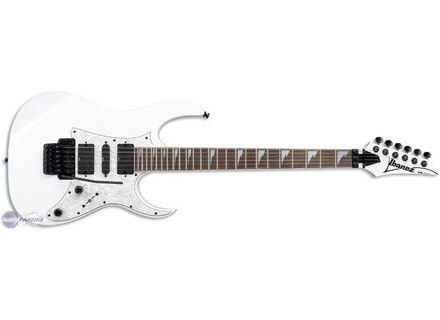 RG350DX, STC-Shaped Guitar from Ibanez in the RG Standard series.

Ibanez RG350DX
4
This is the white Ibanez RG350DX. Mine has a white basswood body, a Wizard II neck and the Edge 3 series Floyd Rose style tremelo. The white body is offset by jet black hardware and an eye catching pearloid pickguard.

I traded a friend an unknown SG copy from the 70s for this guitar. New this guitar goes for about $400. I picked it up because of the great playability and it was my first guitar with a locking tremelo.

The super slim neck. It was a wide but thin neck. I can see why guys like Steve Vai and Joe Satriani use these!

The 24 frets were nice. I was able to get really high up there with my leads as well as it made harmonics fun.

The overall tone of the Ibanez, like most, I find is rather stale. Good, quiet and loud, but not warm and bluesy. I didn't bother upgrading the pickups before I passed mine on, but I wonder if new pickups would have helped.

Well built. I have always like Ibanez's quality. The finish was very consistent and aged well. The neck design was great and the guitar felt very balanced and resonant.

If you are looking to play metal or well anything with high gain, this guitar would be a great pick. Not so hot for blues or classic rock tones. I can't say enough about the playability. Plays like a dream.

Ibanez RG350DX
5
i play mainly rock but like to play abit of everything. iv been playing guitar for just over 1 year and thought my shitty squier strat needed replacing. after playing a couple of ibanez guitars i realised they are god in the form of a guitar.

i paid £295 from www.imuso.co.uk, i got it because of the looks, the sound and the playability of it.

EVERYTHING, only thing it could do with is more colour options but i love the white anyway.

there is a very slight buzz on the top string but it will go away once its been played in enough.

get this guitar if you want a awesome guitar that doesnt cost to much that sounds amazin plays amazin and looks amazin get it.

Ibanez RG350DX
5
I First played This guitar at Long & Mquade`s in Oshawa Ont. I didn`t put much effort into playing it then but the look of it dumbfounded me. About a month or two later I decided to order this guitar as my ax. I ordered from Georges guitar`s in Coubourg Ont. And paid $500(Can) for a guitar listed at $699. Which i thought was a good deal befor getting it. Little did I know how GOOD of a deal I was getting. I got the guitar almost two months later (possable more then two months) because it was on back order. I was told it would only be a week or two when i ordered it. Many times did thoughts of cancalling the order go through my head, but I am really glad i didn`t.

First thing that attracted me to this guitar was the look. White w/pearl pick gaurd and black hardware. Extreamly nice. It has a eligent yet badass look at the same time. In terms of looks there are not many retail guitars that look this nice. Everything on the looks fit nicely and there is not a single turnoff.

In terms of how well this guitar plays it is unbeleaveable. Even from stock it plays ver smoothly and almost without flaw for any style of music. The string tention is nice for blues/jazz/rock licks, hot speed metal solos, and is very nice to get losts of rebound in you`re picking so golloping is not any problem at all. The neck is also very wide and makes it nice for fingerpicking too. Also for being blot on construction It is very smooth to play on the higher frets. It biuld in a way that you are not limited at all.
I was afrade that having a single coil with two humbucks on the guitar that the single coil would get in the way. But you hardle even notis that there is pickups on the guitar.

The stock pickups are very nice for a guitar at this price. They give you a satasfactory amount of power in distortion but its on a clear tone that the pickups inpressed me. You can get an almost acustic sounding tone and can really give you somthing that you can play and relax too.

The Edge II Pro is another feature that impressed me on this. Iv alwasy been a purest and had a hatred against licensed Floyds. Well I can asure you that it grew because of the EdgeII. It holds its tune much much better then a licensed and its way smoother to play on and with. Plus it looks alot better too. What also surprised me is how eazy it is to down tone. It takes about as much time as a guitar that dosn`t lock at all.

About the only complaint I have with this guitar is that the neck seems to scratch eazy. Its not like the neck is going to give way very eazy its just that they could have used better wood and stronger stain. One little fault like that though is not going to turn me away from my love for this guitar.

This is just a fault that is on my unit but I thought I should include it. The tone knob got a bit loose after a week. Something Like that would take no time to fix i just havn`t got around to it.

I havn`t had the guitar long enough to really state how it will hold out in long term. But it seems to be built quite solid. Like I said befor the tone knob became loose after a week but thats just a matter of tightning a bolt.

This is a very nice guitar and one of the best in its price range. Its a great guitar to be a main stage guitar for a intermeadiate guitarest like me. Or a great beat up for an expert. Its price makes it very afordable. And Is almost flawless. An eazy 5 for this guitar in all areas and over all. Its almost a shame it cant get more just for the look of this beauty.

Ibanez RG350DX
5
The Ibanez RG350DX is one of the best guitars I have ever played. I picked this bad boy up in a little town outside of D.C. at a shop called Mellodee Music, for a little under $600. I first bought it because I wanted a new guitar that had the badass looks that this does, plus a floyd rose. I didn't even play it before I bought it... Purely for looks. Then when I plugged in to my peavey stack, the sound was amazing

I like everything about this guitar... EVERYTHING. The sleek looks, the Floyd Rose, the 3-d pickguard, the sound... oh the tone... oh god the tone. This guitar is perfect for speed metal. With its floyd rose, it stays in tune real nice.

I really do like everything about this guitar... I wish it would come in other colors than white, but I don't mind white. Also, just like any guitar with a floyd rose... it is a bitch to downtune... but once you get it it stays tuned.

This guitar has everything you would want on a guitar. Floyd Rose Tremolo, Wizard II neck, 5 pickups H-S-H, and 5-pickup selector. The quality of this guitar is amazing if you like heavy metal, speed metal, or even death. It will play better than ANY guitar in its price range. Just plug into a peavey stack, with a Boss Metal Zone... and you're good to go.

This guitar will kick any other guitar's Ass.

This review was originally published on http://www.musicgearreview.com
Did you find this review helpful?yesno
»
Read the 15 user reviews on the Ibanez RG350DX »