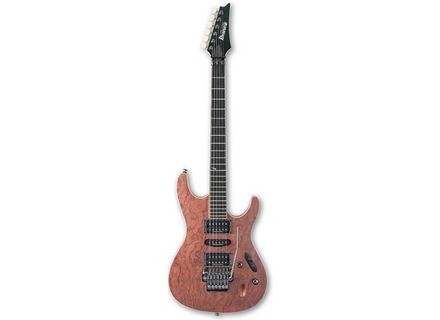 S2170FB, STC-Shaped Guitar from Ibanez in the S Prestige series.

Ibanez S2170FB
5
With the second year of the Korean Prestige facility, Ibanez released a "revamped" model of the S-2075 called the S-2170. This model is really pretty much the same, but the graphic on the veneer changed. This guitar features a mahogany body with a figured laminate top, maple neck, rosewood fretboard, 22 jumbo frets, a unique center inlay, a ZR trem, HSH configuration, one volume, one tone and a five way switch.

Despite this now being the second year of the Korean Prestige facility, I found that there were still a few flaws with fretwork in certain areas on a few models that I tried. I worked in a music store for quite awhile, so I was able to get my hands on a batch of these at a time. Despite that, the guitars were still fairly solid in terms of resonance, fit and finish. The finish on this guitar is actually pretty cool. The biggest complaint I have would be that the poplar top is a laminate top instead of a true poplar top.

Even though this guitar was made outside of the famous Japanese Prestige facility, it still sounds very close to those guitars that used to come out of there. The guitar is very resonant and big sounding despite its tiny body and sleek contours. However, it still suffers from the crappy pickup syndrome that so many other Ibanez guitars have. Once you replace these pickups, the guitars really seem to come alive. I personally like installing DiMarzios in Ibanez guitars for whatever reason. They just seem to mate really well.

The guitar is put together nicely, and it resonates like a good guitar should. There were still a few flaws in the fretwork despite it being the second year of the Korean facility, but they seem to be doing a bit better around this time. The pickups on these still suck, so I highly recommend replacing them. If I had to recommend a guitar, however, I'd still recommend the older models as they just seem to have something about them that really stands out.
Did you find this review helpful?yesno
»