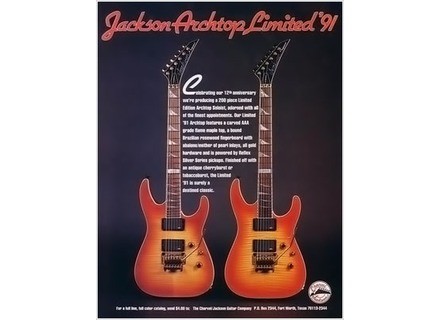 Dinky Archtop, STC-Shaped Guitar from Jackson in the Professional series.

Jackson Dinky Archtop
4
The Professional Series is a series of guitars made over in Japan, and they're fairly good guitars. There are a few things that could have been improved upon, but they were rivals of the Jackson USA guitars for the most part. The guitar features an ash body, a bolt-on maple neck with a rosewood fretboard, 22 frets with dot inlays, a licensed floyd rose, HSH configuration, one volume, one tone and a five way switch.

The grain on the ash with this guitar is really cool. Usually, ash can be pretty heavy, but this wasn't too bad. It was hovering around the 7 lb mark or so. It wasn't feather light, but it also wasn't a boat anchor. The neck joint on this was pretty good. There was a slight gap, but it wasn't a huge deal. The frets could have used some attention, but considering the age, it's nothing too bad. The bridge on this isn't one of my favorites. It's a licensed floyd that is very mediocre, I've found. While some are higher quality Schaller clones, this was one of the lower quality Jackson ones that seemed to utilize very thin metal that probably won't last much longer.

The guitar is an ash body, so it's going to sound different than a lot of other Jacksons out there. Most Dinky guitars utilize alder for body wood. Ash has a very scooped kind of tone, in general. The lows tend to be extended, the mids slightly pushed back and the treble extended a little bit. This makes it sound very big, and with the right pickups, it can really sing. The trick is finding the right pickups. This guitar actually had a DiMarzio Tone Zone in the bridge, the stock single and a PAF Pro in the neck. The Tone Zone in the bridge had a bit too much bass for my liking, even when lowered, but the midrange was pretty nice. The extra beef in the mids helped make the guitar sing more, I found. The stock single sucks, but it's decent with clean tones when split. The PAF Pro is pretty cool in the neck, and I was able to get some real nice lead tones.

These guitars are nice, but be sure you like the ash body wood. Also, realize that these have 22 frets. Most people are used to the 24 fret Dinkys. The 22 fret neck will mean a different neck pickup tone, aside from the obvious. If you're going to buy one, I recommend replacing the stock pickups if it still has them. Also, I would recommend replacing the floyd if you can swing it.
Did you find this review helpful?yesno
»