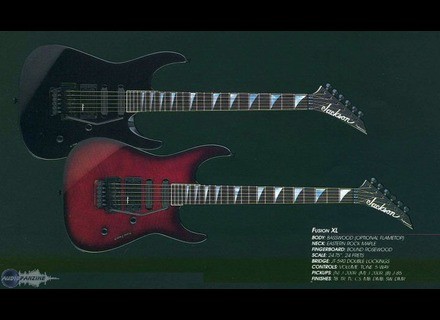 Fusion XL, STC-Shaped Guitar from Jackson in the Professional series.

Jackson Fusion XL
4
This guitar came with an optional flame maple top and a few extra features that set it apart. The guitar's main selling point is its 24.75'' scale. The guitar has a basswood body with a bolt-on maple neck and a rosewood fretboard, 24 extra jumbo frets with sharkfin inlays, a licensed Jackson floyd rose, an HSS configuration with no pickguard (direct mounted except for the ring on the bridge), a bound neck, one volume, one tone and a five way switch.

This particular guitar had some issues with the frets. They weren't sharp on the edges, but they should have been leveled a bit better. There were some low frets that wouldn't produce notes once you start really lowering the action. The neck joint also had a bit of a gap in it. This could harm tone, potentially. The radius on these guitars is pretty nice as it allows you to get the action fairly low without worrying about fretting out, assuming the frets themselves are level enough to where it won't hinder the bend.

I'm pretty sure the maple top on this is a veneer as I don't really hear the characteristics of the maple top + basswood combination on this guitar. The stock pickups in this thing aren't that great. The bridge is fairly muddy, and it doesn't really work nicely for anything. The neck and middle pickups in this are similar to the Duncan Hot Rail pickups. They're side by side single coil sized humbuckers, and they do a decent job. However, they lack the organic quality that the original Hot Rails pickups seem to have. If you're going to keep this guitar, try replacing the pickups with something from the DiMarzio lineup as they work awesome with basswood guitars.

The XL model is probably one of the best versions of the Fusion, but they're still basswood guitars. As someone who loves being a bit traditional, I prefer either alder or mahogany for these since it's a Jackson guitar. If this guitar was made by Ibanez, I'd be all over it being basswood, but alas...
Did you find this review helpful?yesno
»