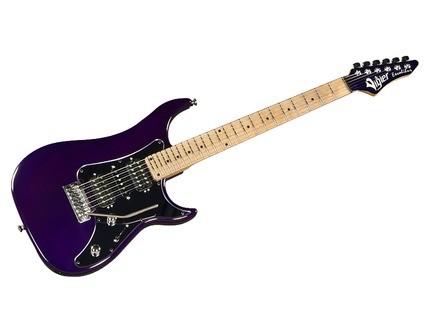 Vigier Excalibur Supra HSH
4
Made by Vigier in France, I wanted a guitar to replace my aging Steinberger M-series, and I wanted it to have a Floyd Rose trem.
One piece maple neck, which graphite insert and no truss rod. EMG 81 in the bridge, 85 in the and SA in the middle, 5 position switch and volume and tone control.
24 frets, 6100 style. Floyd Rose whammy bar.

It's without a doubt a very easy to play guitar, the action it shipped with is the action it still has, which was perfect, not too low so you still can hit the strings without buzzing, yet low enough for easy cruising.

I also seem to prefer the sound of guitars that have necks without a trussrod.

Have used this for many years with a lot of different set-ups from old Marshalls and fender, Mesa Trem-o-verb, Fryette Sig-X, Deliverance, Memphis, Rivera Knucklehead 2, Soldano Avenger, THD Plexi, UniValve, BiValve, Flexi-50, rack set-up with an Axe-Fx into a Fryette 2/50/2, etc...

The gain sounds is why I got it, I'm a big fan of EMGs for single note stuff, the clean can get a bit sterile, which is less of an issue. I guess the down side on EMGs in any guitar would be that they won't sound like a Strat pick-up, but then you won't expect that anyways.

There is nothing in terms of playability or sound I don't like. My niggles are that the body could be a tad bigger.
And that the pick-ups are wired that the #3 position on the 5 way switch is neck and bridge pick-ups together instead of middle pickup alone. If it was a Strat it would bug me, but I actually quite enjoy the two different EMGs together for a darker more mellow lead sound that isn't the "a monkey wearing boxing gloves could make this sound good" typical neck pick-up sound.
The one negative side effect of using a guitar with EMGs is that they end up with the "stereo" jack in order to break the circuit and not drain the battery that wear out more quickly than your average guitar jack.
Did you find this review helpful?yesno
»

the handle is perfect for rock in all forms. This is one of the best that I've played. It just takes a little time to adapt. it will not be enough to end the big shreed but everything else going on, from blues to heavy metal. The guitar is very well balanced and access to acute now secure. the sound is all alone

Mics. I took the Di Marzio Paf pro/fs1/tone area. the paf pro is perfect in the role ascribed to him: it sounds monstrous clean. the fs1 does its job. The tone zone, it is very good for large distos but can also be very nice on a little crunch. His big worry is that the lower, too present, bouzillent all notes in treble and medium high rhythm.
I do everything from metal, prog, rock and even with a group of blues with another and it adapts to all styles of music. I play with a Fender Rhodes and hot it sounds monstrous clean and the distortion pedals I added. Sound is not fat but when you combine metal distortion and tone zone. The harmonics come individually! the sounds are very different thanks to the switch very well studied.
to summarize the monstrous guitar sound.

I use it for a year and it suits me perfectly. I have tried almost everything: fender deluxe, custom gibson, ibanez prestige, musicman, godin, lag, prs ... and I must say that this is the guitar that I like best in all those I tried. This is a exelente guitar throughout the views and value for money is exelent compared to gibson and fender that rely on their reputation.
I wanted to emphasize two points: the varnish sets out alone since it is made craftsmanship, early ca heartbreaking and then at the end he found a vintage side. 2 vibrato: I do not EVER change the tuning or pulling too much vibrato if not bye bye! it goes wrong it super quick exchange of firing (I went from 9-46 to 9-52 and I did a few drops of and I had to go get it fixed)
In any case I advise you that this guitar is for me a very versatile and a royal quality.

Vigier Excalibur Supra HSH
5
These guitars handmade ct of Evry worth the high end amricaines (without the cot of the dollar and transport ..).

We can not RVer far better in terms of playability .... the neck is fast and enjoyable trs without a look RULES of wine (cf swords ibanez sleeves) . The balance of the guitar is perfect and easels Vigier a REFERENCE in terms of tuning stability (although aids by blocking mcaniques).

Action too low nivo rglage the default ..... it's also a matter of taste.

The sound is excellent and the double DiMarzio nivo provide good output and a good offense. Obviously in Splitt they are not worth a real simple, especially in the treble. (IDAL and an excalibur but the expert must have the finances)
The center position is for INTERESTED arpges.

The bridge pickup is a killer for the distortion!

Finally, the sustain is incredible (if the guitar is well RULES ...)

I use it for ending for 6 months and it is a real gem in terms of violin making and therefore the sound is exceptional.
No need to type in amricains was better on the spot!

Jean Fontanille's review (This content has been automatically translated from French)

The handle is really gniale. Trs this guitar is really enjoyable to play There's really nothing to say ... it plays almost alone it is to say .... it is dynamic trs ... it meets all the nuances of the guitar games ...

) are the clear sound with trs christallin beacoup of its presence and its saturated just huge .. .
In addition to the vibrato is more agreement than floyd!! the strings are not coupeset there is no block on a rope like floyd and grain, and sustain the momentum-General for the instrument are greatly amliores.

I own this guitar for 2 years and I'm really happy ... trs I had a little problem breaking the rope intenpestif beginners but everything is back to normal ... I had many other guitars: Samick, yamaha, kramer, jackson, ibanez several including a 7-string ... Each one had its advantages and defects .. for Vigier I see only benefits ....

Did you find this review helpful?yesno
»
Read the 8 user reviews on the Vigier Excalibur Supra HSH »