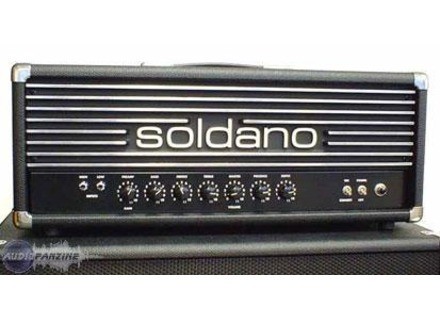 Soldano Avenger
4
This is basically the lead channel from the legendary SLO stuck into one head. And considering I never used the other channel on my old SLO, this amp is an SLO to me. The SLO by the way, is a legendary amp. I mean that. Amps that are based on the SLO are legendary. The early Dual recs and 5150's that came out 20 years ago were near clones of this beast. That's gotta say something.

I'll start by saying this is the loudest 100 watts you will ever hear. If you're on the fence, get the 50 watt. I don't know why I still have the 100 watt because I never tour with it and it's unbearable in my studio. But somehow I can't stay away. This is a truly special amp, only being one channel.

Mine is the 6L6 version. Like I said, it's freakin loud. I've personally never had it past noon. The only time I got it that loud was at a festival which was years ago. I was a kid and I was being stupid. Fortunately this thing gets most of its gain from the preamp so you really don't need to worry about cranking the master at all. The EQ is pretty simple. No surprises. The depth control is more of a taste thing. Overall this head takes 20 minutes to learn inside out. After that you have mastered it.

Sonically, the Avenger is like a hotrodded (and I mean HOTrodded) JCM800 with more thickness and slightly more sizzling highs due to the 6L6's. In fact, I'd venture a guess that for the creation of this amp, Soldano basically took a hotrodded marshall design and gave it huge transformers and 6L6 tubes. Because that's exactly what it sounds like. Obviously there's a lot of gain stage trickery at work here that makes up the bulk of the sound. If you have the turn the gain past 3 oclock then you have a problem. There are some ridiculous amounts of gain on tap here. I must say, this is not an amp for the faint of heart due to the extremely aggressive voicing. I've played a lot of modern metal amps and the avenger has the most snarling and mean voice I've heard. It's honestly geared towards heavy styles and not pop rock. It just sounds wrong in other contexts, unless being used for solos or something.

I must say this head sounds best with the Soldano cabinets. Any other cabs just sound wrong after you use that one.

I can really only say I wish it was more versatile and I wish it was quieter. It clean up miraculously but the voicing limits what styles you can play. For certain genres it's an awkward amp to use. Too aggressive in the mids. I still love it though. I record a lot of metal bands in my studio and they pretty much unanimously choose the Avenger for all their tracks. Sometimes we layer it with an Uberschall for rhythm. I don't think I'll ever get rid of it unless I come by a 50 watter.
Did you find this review helpful?yesno
»

Soldano Avenger
4
The Soldano Avenger is a lead channel version of the SLO-100 amp. It is a single channel amp with a high and low gain input. The amp puts outs some heavy saturation that is very thick and chewy. It is a very huge sounding amp that gets pretty heavy with a Marshall style voicing and saturation.

One thing I love about Soldano's are that they are still manufactured by one tech from start to finish. Though the company has grown to great success they still keep it within house for close detailed operation.

The Soldano sound is very huge and thick sounding. They have a distinct chewy fat distortion that they are well known for having. This amp can get a great rock and metal tone that stays tight even at lower dropped tuning and 7 and 8 string guitars.

You can dial in some great 80's metal/rock tones very easily with this amp. You will need to open up the presence and the mids more since this amp is lower midrange heavy in nature. The think just sings great sustain and drive that makes playing very fun.

When I first played a Soldano I was unsure of how to get a good tone, but with some tweaking I started to hear what was so special about these amps. They are naturally fat and chewy which separates them from normal Marshall JCM 800. The 800 can be a little thinner and more higher midrange. This amp I actually a little more than the Soldano SLO beause it already comes with the depth control knob. The SLO you have to get it modified with that extra control. I don't think someone should ever have to modify a $3000+ guitar amp.

These units come in at around $1800 which is a great price for a high gain boutique amplifier. I would recommend anyone who needs s simple single channel British flavored hard rock amp. Under $2000 for something of this caliber is very enticing.
Did you find this review helpful?yesno
»

Super simple lay-out makes for a very easily dialed in amp. Manual is not needed. Dialing it in is as simple as as can be. The low sensitivity input essentially mimics the SLO-100 with the Warren Haynes mod.

Use this a lot with a Patrick Eggle Berlin and a O'Donnell Fusion. Very easy to get a mid rich high gain tone ala Holdsworth. The amp's gain a natural compression makes for a great smooth sound. But just like it's bigger brother it has enough teeth on top so it won't be a muddy mess. With the DeYoung output transformer it sounded very close to one of the 2 SLO-100 I compared it to.

Since the amp has no effects loop if you want delay it'll get a bit more convoluted. Running a delay pedal before the amp, thus before the overdrive will end up with that "folded over note" sound. The only option-unless you mic the amp and add delay after the fact- is to run it in either a wet/dry set-up or loaded down into effects into a power amp. But this applies to any amp that has lots of gain and no effects loop.
Usually I don't care all that much about visuals, but the face plate machined to look like a hot rodded cars engine block is also a nice touch.
For Fusion guys with dual amp set-ups, or if you don't need a clean sound this is a great choice.
I've used this together with an old Fender Bassman switched into the same cab via a Radial Engineering Headbone switcher.
I'm not sure how much milage guys that want a versatile amp get out of this one, you can dial in nice clean tones, but for my tastes the amp's strong suit lays with it's high gain tones. This is also one of the few amp's I have used that has enough natural compression to use fretless guitars without extra pedals.
If gain is your thing, this very well may be the ticket.

Soldano Avenger
5
The Soldano Custom Amplification Avenger is a super high end tube guitar amplifier. The amp has 100 watts of power and is just a head, so there's no speaker cabinet here. Soldano does make cabinets as well, but when I've used this amp it hasn't been with one of them. The power tubes in here are 6L6's and it's got 1/4" connections for high and low inputs in the front. In the back it's just got two 1/4" outputs for hooking up a speaker, as well as a three way ohm selector knob that gives you 4, 8, and 16 ohms to choose from.

The make up of the Soldano Avenger isn't hard to follow at all and it gives you all the control you could want. These parameters include knobs for preamp gain, bass, middle, and treble EQ control, and further knobs for master volume, depth, and presence. No manual should be necessary.

If great tone is what you're, great tone is what you'll get with the Soldano Custom Amplification Avenger. It's up there with the best sounding amplifiers I've ever heard and would be seriously considered if I could get any amp. I love the settings you've got on here as they are intuitive to getting a great sound. It's great across the board in terms of different styles of playing and genres, as it's simply a great sounding amp and will translate well to just about anything. It's also great for overdrive when cranked up a bit.

The Soldano Custom Amplification Avenger is a seriously incredible amplifier! I've only used this and one other Soldano amplifier to date, but they're definitely comparable in sound definitely some of the best amplifiers I've heard. They're really quite expensive because they're hand made I believe, but for a pro it's going to be worth it to have incredible tone all the time...

Did you find this review helpful?yesno
»
Read the 5 user reviews on the Soldano Avenger »

See all 27 photos of Soldano Avenger »