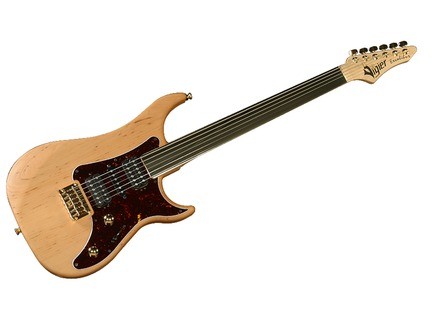 loudfunk's review"Been a main stay around here for a long time..."

Vigier Excalibur Surfreter Supra Imetal
5
...and for good reason. Been using Vigiers for over 10 years now.
They're like the best kept secret in the Super Start class.
This guitar is their fretless version of the Excalibur, 2 humbuckers and a single coil, with the 5 way selector, going bridge, half bridge and middle, bridge and neck, half neck and middle, and neck pick-up for a sound.

I've used with string gauges ranging from 009 to 042 to 013 to 056. With a wound g string as well as a plain g string.
Bridge is a hard tail, seeing that a whammy bar would make for a slippery ride with no frets and all.
Fretboard material is what Vigier calls Delta metal, which I believe is essential brass.
Fret markers on both sides of the fre board, kinda like fret edges.

Easy enough to get to the top frets, intonation and sustain is another story. Or better put is the players responsibility. As a rule with fretless guitars they have a tendency to have a really fast decay on their sustain when it comes to the plain strings. Your options are...heap on gain and compression, that will help. Use a wound g string so you have only 2 plain strings, or fret with the finger stood up so the edge of the finger nail becomes a node point, this way you have all the sustain you could ever want-regardless of gain levels-on the plain strings. Kinda like a sarod player.

Great way to get a more cello like sound, wonderful with a sustainac or ebow. With the nail stop technique makes for a great lap steel sound.
Chords while a pain in the neck to intonate are a fun ride.
As for the brass board, it sustains better than most woodboards...obviously. However, not a fun hang in cold climates when you bring it in from the car. Or for that matter in hot climates.

Not an instrument that will have one sounding great in minutes, but with a couple of days it's be a fun ride.
The advantages...you get to slide down into pitch, slither harmonics around, in general get all kinds of fun in between and out sounds. The bad part...sometimes that happens when you don't intent it to.
The fret markers on the side of the finger board are a great initial aid, however once you get cruising it's easier to just have your ears guide you and more importantly learn to recover when landing in out territory-or not.
I' say the best bet for any one starting to experiment with fretless guitars is to have a tuner in line to double check the starting point. Or better yet play over a drone you pre-record. This way you can actually hear that major third that your tuner tells you is 14 cents flat will actually sound it tune. The beauty ot Just Intonation over equal temper tunings at work.
Did you find this review helpful?yesno
»

This guitar is very light and ergonomic design is perfect!
I'm not a fan of the types stratum or strata, but the super race is not noticeable at all and when you do not notice is that there really 0 defects.
No frills no gimmicks just a complete and easy guitar.
The sound is really saturated with overtones, nothing to do with an Ibanez fretless SC Yannick Robert (very good incidentally). I have three guitars fretless is still the easiest to play is the most versatile!

I really think what is very versatile, I do not see any style that can discard it (this will be your fingers that will not agree). The pickups offer up anything really fun in different styles. This is the guitar Ron "Bumblefoot" Thal.
I really fond of the paf pro in neck that transcribes the sound of the fretless (contrary to what can be said in the test beds). Intermediate positions are interesting, that I like least is the Tone Zone. I love the bass on a scratch (I also have 7, 8 and 9 strings!), But the tone zone does not give a full sound, which I think are too separated in the spectrum of sound (even on fretted guitar) but it remains my opinion.
I had already mounted a paf pro in another bridge on fretless and this small and saturation in glissendos MAGNIFICENT ...
On a whole it is beautiful lamps, an octave or a harmonizer, a whammy and especially a good delay, and off you go in the electric violin and oriental instruments.
A foray into jazz solos and furious and it even faster remain detached.

I am not my first fretless, but I think it's one of the only ones at play and feel, makes this a delicious and bursting with harmonics above it in all styles! And the more one feels no dead zone (one or more locations or notes remains bland, low-sustain: it is inherent in wood and fretless touch it even with an epoxy varnish cooked or uncooked) on the neck.
It is an investment and an instrument that could be difficult to master ... but if the effort does not put you off I think it's a CHOICE!