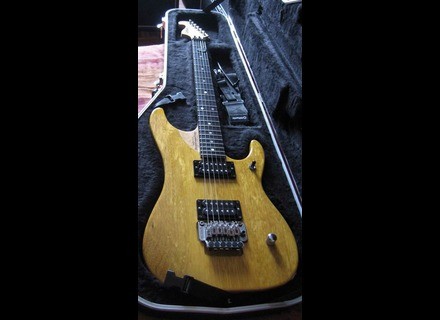 Washburn N4 Korina
5
Nuno Bettencourt is in my top three guitars players of all time. He has a swing and swagger to his guitar playing that is not only melodic but catchy as well. He has a great rhythm hand and lead all in one. His solos are perfectly crafted and special each time. Many solos from people can be pointless or seem just like some guitar Olympics. His though fast at times has a point to make and carefully thought out.

This guitar highlights his playing style and really gives him the tone that is required to go along with his playing style. This guitar is made to look old right out of the factory. he has continued to play his original N4 and if you have ever see it it looks like it has been rode hard and put up wet. Washburn has done the work for you on this guitar.

This guitar features the Korina wood which is a little more expensive than an alder or mahogany wood. You will get more of a mahogany tone with the Korina so it will be a little more warmer and thicker in the tone.
Aged solid Korina body

This guitar feels good right out of the box. It has a thin neck profile and makes it very easy and convenient to play. You can relax a little more and be able to slide up and down the neck with ease.

At the bottom of the neck it have a routed neck joint that allows you to reach the higher frets. If you have played a fender Stratocaster then you know that at times it is hard to reach the 20th fret because of the neck heel. Washburn has eliminated the awkwardness of playing in that register by carving out the backside for easy fret access.

I would recommend any Nuno Bettencourt fan to own one of these guitars. They are very fun to play and sound great. The body shape is slightly smaller than a Fender Stratocaster. it has a similar shape but slightly smaller in profile.

Primero's review (This content has been automatically translated from French)

Washburn N4 Korina
4
I have owned this guitar out in the 90 United States and signed by Bettencourt Himself, I bought this guitar-music Jym (Pigalle), Paris. It is in every way comparable to the N4 ash, apart from the body in this fantastic Korina, there is a handle with ebony fingerboard, head thrown back, stamped floyd Washburn, two microphones, Bill Lawrence and Seymour Duncan. It comes in a beautiful case, accompanied by various documents, and also the photo of Nuno, this photo shows him to sign a guitar, m'enfin the works! In his guitar case is covered with a thick black struck a splendid washburn.

The handle is very nice, access to acute is perfect, the interface is extra. It is made to play metal on the edge and can spill over into other styles, but it's still very typical, but this is a default for this scratch? I do not think so.

It is suitable for the particular metal, it said, using the intermediate position, plugged into a Fender twin reverb, you can go to sounds "hendrixiens" not so distant also certain sounds "Bettencourt." In clean sounds, same, according to the amp, you can have certain sounds not so bad. This guitar is perhaps less typical than one might imagine in spite of the simplicity of the Electone, because here no push-push to separate the dual microphones for clear sound strat-style. I quite like the sound of this guitar.

It's handmade, it says on the instructions supplied with it to say that this guitar was made by hand, the precious wood (korina) was chosen by Mr. Bettencourt Himself is also marked on the record. Nuno has talent with his guitar, but he's trained as a luthier to have such skills .... (Washburn here are a little inflated, think big foutage of mouth that makes me angry).

This guitar deserves a very special accessit as it is in some ways .... huge marketing, totally unacceptable.

Well yes, I am sarcastic on this guitar, which actually is disappointing in relation to the price paid is very expensive photo, and signature of the marker Nuno. I think it's a marketing coup among others. I can only blame Washburn, this practice limited edition "bottle" is widespread among many manufacturers, everyone has the right to think what he wants. CONCERE me, I have my own opionion, Limited ....... to avoid.

Does Bettencourt played a Korina?

I do not think so. Bettencourt played on the models could not be more std. Still, this guitar can be endearing, but it deserved more care, and again, I repeat, be supplied with a floyd and a acastillage worthy of the purchase price ....

No, Bettencourt does not play on a Korina, nor others like "limited", to be taken literally and figuratively ....

I bring the same conclusion as my "ash", namely that the concept of this guitar deserves better in terms of build quality. For all I am disappointed by the work and the care given to this very plain guitar, as I think this guitar for its concept, its handle, its microphones, etc. .. a guitar is worth that one is interested.

My opinion is intended as sincere and constructive, it is not to devalue an instrument, but one can legitimately Assen has a constructor for the truths he makes good use. I read reviews, or are fans with a vengeance on 10/10, I find it downright childish, in other words my electric train is the most beautiful of all electric trains in the world and certainly more beautiful than the floor from below, it will be understood that with this kind of approach, we will not advance the schmilblic!