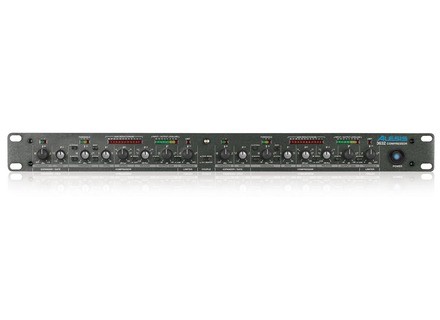 Alesis 3632 Compressor
5
The Alesis 3632 is a 2 channel compressor that will give your sound a lot of warmth and richness with little effort. This compressor was a lot more in depth than I thought it was going to be at first glance. There are a lot of knobs on the front of it and it was unlike any other compressor that I have used before. It did take a while to fully get the swing of working with this compressor and limiter hands on but once I got the hang of it, it gave us a whole new sound. Controlling the dynamics of your audio will make or break your overall sound. The Alesis 3632 gives you t he tools you need to get the sound that not only you want, but you need to have.

Using this compressor you will have no trouble getting a “big” sound with it. Just a small amount of tweaking can change the dynamics of your whole master. With the side chain that will send and return and the ability to switch operating levels gives you t he full ability to run it with any of your gear or audio signals to give you way more than what this unit cost.

The sound quality is great, it does add some life and color to your sound. You do not just have to use it with mastering. It is great for individual tracks and instruments as well.

There are only 2 XLR inputs and 2 XLR outputs on this compressor. It would be nice to have a few more though especially for use because we just don’t ever know exactly what gear we are going to be using. But for more outputs you have to spend more money, so at the time we did not have a problem using just 2 inputs and outputs with this compressor. It has really put our audio to a professional level all while staying within our budget. I would purchase this again in a heartbeat if we needed to. We have moved on to some better compressors but I will never forget what this one has done for us.

The Alesis 3632 Compressor is the new and updated version of one the most popular dynamics processors ever, the 3630, which was famously quoted by Daft Punk as providing pumping sound in several albums. So it’s fair to say that the 3632 has attracted a lot of attention amongst the producer community building upon the legacy that its predecessor left behind.

I was surprised to see that the 3632 is significantly deeper and heavier than the 3630, which is due to its enhanced internal power. The actual layout of the controls is similar but with a few obvious differences, it does of course share the same two channels of noise gate/expander and compression/limiting that can be altered in stereo or mono modes.

There are however some very distinctive differences between to the two models, the majority of which being improvements and upgrades. The most obvious of which is the new versatile 2181Bs which have replaced the outdated THAT 2150AVCAs found in the 3630. The circuits themselves have also been subject to upgrade to provide cheaper more efficient components. Crucially the op amps have been improved to for more detailed equivalents, all of this adds up to an all-round better sound and build quality.

In terms of actual sound its clear the Alesis have the same pioneering intention for the 3632 that they had for the 3630 over 20 years ago, which was designed as cheaper alternative but was massively popular thanks to its technical superiority. This is certainly applicable to the 3632, its not exactly outstanding but its very versatile and taking into consideration its price and size its perfectly suited to home or small studios.

The 3632 Compressor keeps the same impressive metering of the 3630, the sidechain feature allows you to add compression in effects loops and ducking. You use this feature to trigger compression when you want it, a second internal sidechain has a switchable low-cut filter to help control pumping from heavy bass.

Unusually the 3632 doesn’t have a hard and soft knee setting, but instead has a hard knee setting or a smart knee option for more soft subtle effects. As well as this it doesn’t have an RMS mode that was used on the 3630 and its replaced with an auto button. When it is in auto mode the attack and release settings are automatically set depending on the incoming signal, this is pretty useful but unfamiliar to me. A limiter at the end of the chain protects against spikes in the output.

The Alesis 3632 is in many ways very similar and very different from its older brother. Basically it’s just a generally improved update and as a budget compressor it’s a must buy. Granted if you’ve got the money to spend on more expensive competition then I would advise it but I really like it. Its great for beginners as its cheap, compact and easy to use but is still suitable for more experienced producers.

fredouille2002fr's review (This content has been automatically translated from French)

Alesis 3632 Compressor
What are the effects or types of effects available? compressor gate
What technology is used? (Analog, digital, tube ...) Analog cms
Are they edited? Via a Mac / PC editor? not
What is the connection? (Audio / MIDI) audio
Is this a rack or rack MODEL? rack

The general configuration is it simple? yes
Editing sounds and effects is it easy? yes
The manual is clear and sufficient? Yes ...

The effects are they effective, responsive and realistic enough? it compresses
Which instruments do you use? I am not using at the moment
Which ones do you prefer, you hate? N / A

How long have you use it? 1 year
What is the particular feature you like best and least? the mettres seen in / out compress. finally all have ...
Have you tried many other models before buying it? not after
How would you rate the quality / price? compress it for the price, there is better
With experience, you do again this choice? Not ..

not necessarily turn the pots well, I'm disappointed for the Alesis.
I have 2 dbx, much better.
the Alesis is not a basic circuit like most dbx compressors, I do not know what they use, it smells like low cost, then that is a cheap compressor and a priori there is worse

2 of 23 people found this review helpful

Published on 04/06/11
Alesis announces the 3632 Compressor, a dual-channel compressor, limiter, and gate unit.