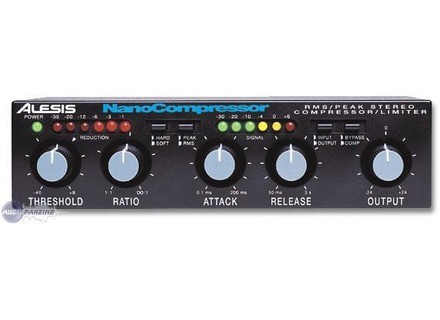 Alesis NanoCompressor
4
Bought from Musician's Friend for $99. I needed it to record vocals and bass because they've never sounded "present" enough on my records. The upper range in my voice also needs taming.

Fairly straight-forward controls, and I heard a noticeable difference in the very first vocal track I used it on.

The rubber control knobs are of the type that could easily fall off and the metal pole inside bent. But I use mine pretty gingerly, so I don't see any danger on my part.

Pretty good, though not exceptional. The casing feels a little thin, but again, it hasn't sustained any damage yet, so I can't tell.

I've been satisfied with this unit so far. Is it as good as full-size rack-mounted units? Probably not. But is it a friendly-priced piece of gear that can improve your sound? I think so.

Alesis NanoCompressor
5
I bought the Alesis Nanocompressor for $89.95 from Mars Music.


The Nanocompressor is a compact, solidly built unit. The controls are simple and straightforward, but fully adequate. It gives the user a wide range of dynamic control, from soft compression to hard limiting.


I use it in many different ways. When I record bass, I run it through the Nanocompressor to round out the sound and also to limit the output so it doesn't exceed the input limit on the computer recording software. I keep it on my computer desk and plug the soundcard's stereo line inputs to the back of the Nanocompressor (using adapters). This gives me an easy interface into which I can plug various recording instruments. If I don't wish to use compression, I simply engage the bypass switch. However, I use compression on most instruments and vocals. At the very least, I use limiting to avoid overloading.


Another use for the unit was at our church's annual Drive-Through Nativity. Church members dress up in period costumes around Christmas and stand outside the church in scenes. We set up a legal, local radio broadcast that visitors listen to in their cars as they drive through.


Before I suggested using the Nanocompressor, it was a great deal of trouble to watch levels. We play Christmas music from many different sources, so the levels vary widely. That can cause trouble with a broadcast.


We've used the Nanocompressor two consecutive years and it makes the broadcast much better. The audio operators just watch the Nanocompressor do its job. The man who sets up the radio broadcast equipment just loves it - this year, he was anxious to know if it would be available. It's truly a versatile unit with many differnt uses.

The devices comes in a study metal case. It gives the impression of strong construction. Although I treat it gently, I have confidence that it can take hard knocks.


The devices comes in a study metal case. It gives the impression of strong construction. Although I treat it gently, I have confidence that it can take hard knocks.

The Nanocompressor is a highly versatile, inexpensive tool for performing musicians, recording musicans and others who deal with audio signals. It's a tremendous value and most any musician should be able to find a use for

See all 70 photos of Alesis NanoCompressor »