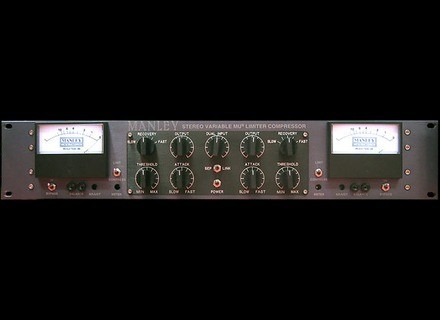 Manley Labs Stereo Variable Mu
5
Manley Langevin's Stereo Variable Mu is a dual channel limiter and compressor. It is an analog dynamic processor, the connections of which I'm not sure of as the few times I've used it it was racked up already and I had no need to look at the back of it. The Variable Mu will take up two spaces in a traditional size rack casing.

I found that using the Manley Langevin Stereo Variable Mu was generally a pretty easy thing to do. I will assume that those who are using a high end limiter like this one will probably have a bit of experience using other limiters and compressors, so if this is the case, these users should be able to adapt quickly to using the Variable Mu. Each of the two channels has it's own parameters for threshold, output, attack, and recovery (release). There is than a dual input know which controls the input level on both of the channels. In addition, each channel has switches to choose between either a compression or limiter mode, for bypass, and there is also a single switch to choose either a linked or separate connection between the two channels. I haven't seen the manual, but I think the Variable Mu is easy enough to use where you don't need one.

The Manley Langevin Stereo Variable Mu is capable of being used in all sorts of situations and scenarios. While it is first a limiter and then a compressor on paper, I would say that it has equal capabilities to do both sort of dynamic processing. The sound in general has a very good balance of clarity, sharpness, and girth. I love the way that it sounds on vocals, which is really the only application that I've gotten to use the Variable Mu for thus far. Judging by the way it sounds on vocals alone though (and I've used it on a few different voices), I would say that this can be used for a variety of instrument applications as well. I've yet to have the chance to prove this theory though...

The Manley Langevin Stereo Variable Mu is definitely one of the most popular products that Manley has to offer, which is saying a lot considering their impressive line of high end pro audio gear. I love the gear that Manley Langevin has to offer, although it can be a bit pricey at times, including with the Variable Mu. However, this is absolutely what you need to expect from high quality signal processing like the Variable Mu. If you're a professional studio owner or engineer, the Variable Mu is something you should absolutely check out, but if you're a home studio owner, this is probably a bit out of your price range.

Anonymous 's review (This content has been automatically translated from French)" Its warm, but quickly saturates"

The device heats a lot, it is important not to stick it to the other racks.

Configuration is very simple: all the standard parameter of a compressor (threshold, attack, release), but no ratio, which varies depending on other settings and the input signal. This causes a gentle compression, well adapted to link instruments of a mix.

The downside: the varimu resents the dynamics are too high, it saturates quickly: it is often wise to use a limiter in front (the Slam in my case).

The sound is warm: the varimu transforms (bon!) mix music.

For its price, it would have been nice if the device saturates least in high dynamic.

If you do not have a hard limiter to attach to it, it will be necessary to test whether other kinds varimu phoenix does not suit you best.

To listen to this product: www.myprods.fr

6 of 10 people found this review helpful

Manley Labs Stereo Variable Mu
5
Compressor or limiter, to choose from. A vehicle while lamps, which heats the sound, and heat at all! At the end of journalists, it can be used for grilling your meat.
Rackable, but you prvoir the place above and below ... it's quite warm!

Superb manual, easy at first, but to get exactly what you want, we must quibble. No function of attack or relchement automatic, it's 100% manual.

Usable on almost everything. Can be used for drums, bass or voice, but it is often used for mastering. The sound quality is superlative. I think that analog is the best compressor I've heard. The sound is warm, natural (meaning not the effect of compression) and above, can be strong without abmer ringing sound. This machine can collect large volumes in between.
It can be used dual mono or Stereo.

It is expensive, ok. It heats up (you can dye the heating when it is on), ok.
Both channels keep their rglages spars, even when we are "link".
For the rest, the box of course. The finish leaves a little DSIR (not all the knobs n'taient visss well .. it weird for a machine of this price). But hey, this is the kind of air we do not regret having bought. We just regret not having bought more than tt.

nikko666's review (This content has been automatically translated from French)

Manley Labs Stereo Variable Mu
5
Compressor / Limiter studio PRO, used on many hits for over 20 years.
It is analog. The technology of variable MU is unique and only with the Fairchild 670 used this technique.
Basically the idea is to use the relaxation of the tube To determine the degree of compression. It is a soft knee (the action is transparent). It is rack mountable, big and heavy, built like a tank.
He may of rglages is frustrating.

In this area it is very simple. There is only one thing: compression / limiting the signal. So little rglages 6 no recovery, attack, gain and threshold ...
One wonders, or will the need to pay 3000 EUR to buy it.

3000 EUR to justify it must cost. Simply magical.
It is not my opinion only one compressor is also a sound enhancer. You spend any of your songs dedant and it sounds serious. Determines impossible to exactly why. It changes everything, the bass sound more pchuent the acute are distinct, the medium you jump in the face.
I make music for a long time and I have seen the compressor, the Manley Variable Mu is the caviar of mastering. All Michael Jackson dedant pass. It is a wonder of your songs. So yes it has little option but we must listen to understand.

It is rare to say without fear of being wrong that a device is the best in its class. Yet in the case of the latter. Manley saw the socity and sell for 20 years, but try to entrouver a hand!
When you have one, you keep it. Or is that adcid of stopping to make music.

Note: This notice applies to the first version of the Variable MU (with 6386 lamps). The latest version is more transparent and do not have that particular color. The problem is that these lamps are now ending for it ... disparatre n'ey will be more at all ...

Did you find this review helpful?yesno
»
Read the 8 user reviews on the Manley Labs Stereo Variable Mu »