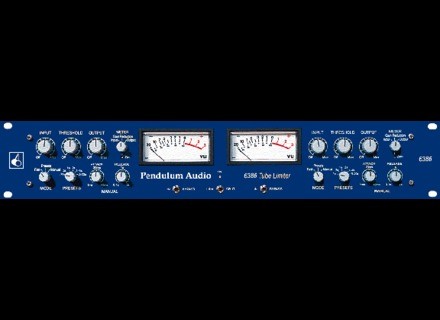 Pendulum Audio 6368
5
The Pendulum Audio 6386 is a stereo tube limiter. It's somewhat based on the classic Fairchild 660 and 670 compressors, but to what extent I'm not sure. It's an all analog piece of gear with both 1/4" and XLR inputs and outputs and 1/4" side chaining connections too. It will take up two spaces in a traditional rack casing.

It's not hard to use the Pendulum Audio 6386 if you're familiar with the general make up of dynamic processors. There are definitely a lot of options here but it shouldn't be overwhelming if you understand the basics. Each of the two channels have parameters for input, threshold, output, mode, preset, and attack and release. The mode parameter is a three way switch that allows you to choose between a fast attack and release, manual attack and release with the given knobs, or the option to choose between the preset attack/release times. The 6386 also has two VU meters with a choice to monitor between gain reduction, input, or output. I haven't seen the manual for this.

The sound of the Pendulum Audio 6386 definitely puts it up there with the best compressor/limiters available. It's tube so it definitely has a particular sound and certainly isn't transparent, but for many situations the 6386 is a great choice - especially for vocals. With this amount of control and the fact that it's tube limiter, it's going to be hard to go wrong with this...

The Pendulum Audio 6386 I think is now going under the name ES-8 and I'm not sure if there are any differences between those marked ES-8 and 6386. Either way, I know that the 6386 is everything it's cracked up to be. It's a seriously awesome tube limiter that is perfect for recording vocals. It's expensive, but for two channels of tube compression modeled after a Fairchild, it's not so bad!
Did you find this review helpful?yesno
»