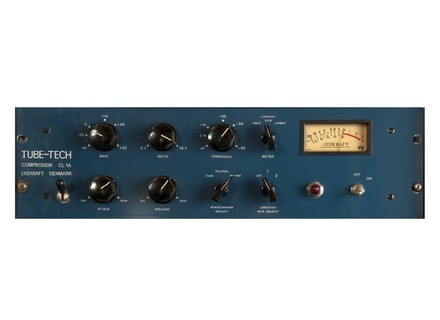 Tube-Tech CL1A
5
This is a hardware outboard compressor made by Tube-Tech. It's one of the more popular outboard compressors out there, it's been in use for decades and has a stellar reputation. It's a tube-based compressor, so you know it'll fatten up the sound you're running through it. This has typical connections as far as compressors go, the one I used was already hooked up to the patch bay. This compressor is a single channel.

Using this compressor is pretty easy overall. I'd say that using it is pretty easy, though it does have a few more features than most compressors do. It has a knob for gain, threshold, attack and release, as well as a ratio knob (ratio goes from 2:1 to 10:1, which is a pretty decent range). There are also knobs which change the mode of operation (manual, fixed, and fixed/manual). Basically, if you know what you are doing with compression, this will work just fine. I haven't seen the manual for this piece of equipment so I don't know what it entails, I doubt there are many people who still have the manuals.

I like the sound of this compressor a lot. It really warms and fattens up tone quite a bit. It's great at bringing vocals out front and kicking them up a notch or two. It's also great on other instruments for the same reason, it's definitely a compressor that will slightly color the sound but I'd say that it's almost always in a good way. I probably wouldn't want to use this on a voice-over job since that usually tends to be cleaner and less warm. But I'd say that you can get everything from a light limiting compression to a full-on squashed tone and it will all sound good.

I like the warmth and tone of this compressor a lot, it really fattens up sounds nicely. It's pretty expensive, so save up! Definitely only for studio owners, there's plug-in versions of it available that would work fine for home studio owners.
Did you find this review helpful?yesno

Tube-Tech CL1A
5
The Tube Tech CL1A is a single channel compressor that is analog and is tube based. It is rackable and has XLR connections. The all tube and analog inlay of this unit makes for a great warmth and fullness not achieved with your standard outboard compressor plug in.

The configuration is pretty basic for an outboard compressor and is easy to setup. I've never had to use the manual so I can't say how useful it is - it is really easy to control and I'm not sure the manual would teach me much I couldn't figure out by simply just using it. If you have access to the manual though, I would take a lot at it as I'm not sure what the nformation that it possesses is.

The Tube Tech CL1A is as warm as any compressor I have used. This compressor works great on vocals, but would probably sound good on anything that you would want compressed including drums, guitars and bass. Its extremely easy to get a nice sounding, full sounding compressed signal with. I track vocals with it all the time, and it adds a loudness and warmth to it that I can only get with real tubes like this has.

I've been using the CL1A for about a year. It is one of my favorite compressors and have always heard good things from other people about how much they like it. It it one of many compressors that I use, but if I only had to use one this certainly wouldn't be a bad choice. I can't say enough about the unique warmth that this adds, and while it definitley costs a pretty penny that most home studio owners can't afford, it is a top of the line compressor that is used in a professional studio environment. It can color the sound with warmth or you can get a cleaner signal depending on the way you set it. Overall this is my favorite Tube Tech model even though they make a number of great sounding compressors.
Did you find this review helpful?yesno
Cookies help us improve performance, enhance user experience and deliver our services. By using our services, you agree to our use of cookies. Find out more.