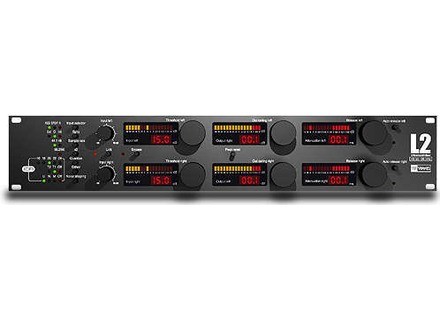 L2 UltraMaximizer, Studio compressor from Waves in the Ultramaximizer series.

Waves L2 UltraMaximizer
5
This ‘ultramaximizer’ (essentially a look-ahead stereo mastering limiter) is the only digital unit to make the cut. Compression is one of those areas where DSP-based units have traditionally been noticeably inferior to their analogue counterparts. Only very recently have plugins caught up with analogue technology when it comes to controlling the dynamics of a signal. So what makes the L2 special?

In the era of aggressive loudness, the appeal of the L2 is obvious: it makes tracks louder. Simple as that. As such, it’s become a go-to weapon in many mastering engineers’ arsenals. Under the covers the L2 works like any other limiter, by effectively reducing the peak signals in a mix so that everything can be amplified in order to increase the average loudness.

But how does it actually sound? Let’s just say you’re not buying the L2 for its character. When pushed hard it’ll happily destroy the dynamics of your track, introduce distortion and eventually create the most horrifically clipped, harsh sound you can imagine. But that doesn’t stop it being one of the most popular pieces of outboard among mastering engineers looking to squeeze that last fraction of a decibel out of a mix.

If you’ve ever compared your own mix with a chart hit and wondered how they’ve managed to push the mix that loud then you can all but guarantee that a maximiser like the L2 has played a pivotal role somewhere in the mastering chain.

The one major downside? It sounds virtually identical to the plugin on which it’s based. But that’s good news for the rest of us; if you’re not setting up a hardware-based mastering studio, the much cheaper plugin will probably do the job just as well.
Did you find this review helpful?yesno
»

Waves L2 UltraMaximizer
5
The Waves L2 UltraMaximizer is a hardware version of the ever popular L2 limiting plug-in. The L2 hardware version came before the L2 software plug-in, but is modeled after the L1 plug-in. It's a digital processor that can handle up to 96 K sample rates and has a pretty high quality 24 bit analog to digital and digital to analog converter. I'm not sure on the connections, as the mastering studio that I used this in had it all hooked up and good to go. It is rack mountable and will take up two of your rack spaces.

The configuration of the Waves L2 UltraMaximizer is definitely a bit more in depth than the plug-in version but still isn't terribly hard to use. The main parameters found here are for threshold, output ceiling, attenuation, and release, and you can also adjust the volumes of each channel independently. There are more settings here but these are the main things to think about the L2. The manual might be a good thing to check out once or twice, but once you get into it, it won't be necessary.

The sound of the Waves L2 UltraMaximizer is quite awesome, as it makes what you put through it sound great right off the bat. When I was getting my last album mastered, the mastering engineer used this and showed me the difference between it on and off and also the difference between this and the plug-in, which is quite different. This can definitely add a bunch of clarity to your mixes and also makes it possible to dramatically increase the volume of your mixes. It's smoother than the plug-in and also gives you more options to work with.

While certainly more expensive than the plug-in versions, the Waves L2 UltraMaximizer is going to be worth it for the pro mastering engineer. It gives you options in sound and can definitely bring your home mixes up a few notches. I don't know what this would go for now as it's definitely on the older side since it came out before the L2 plug-in but after the L1 plug-in. If you can find a good deal on it, it's going to be worth it for those home studio engineers looking to take their studio and mixes to the next level.
Did you find this review helpful?yesno
»

Waves L2 UltraMaximizer
4
Along with the L1, the L2 is also one of the more popular adaptive limiters out there. Where as the the L1 adds this neat little bit of character to the mix, I find the L2 to be a little bit more natural sounding. Aside from that, they're really virtually identical. The plugin has sliders for threshold, output ceiling and release. It also has buttons to select bit rate, dither and shaping. To use this plugin, all you do is enable it on your master buss, and you're good to go. I never experienced any problems while using this plugin, and there's really no need to read the manual. If you've never used a limiter before, keep the ceiling below 0.0, and you'll be golden most of the time.

This is the part where Waves plugins really excel. These are awesome when it comes to reliability and stability. First of all, this plugin is a cross platform compatible plugin. That means that it works on both Windows and OS X machines alike. I've never experienced a direct crash related to this plugin, and that's thanks to Waves' superior coding compared to certain other companies out there. It doesn't take up too much memory, and performance is awesome on this thing. It's a 32 bit plugin, but considering its age, it's hard to fault it for that. I hope that, in the future, they'll change this to 64 bit, but I'm not surprised if they won't simply because of their other options out there.

This is yet another loudness/limiter plugin. It works just as nicely as the L1. I really can't say which one is better because they're similar, and they both get the job done. Where as the L1 has these cool artifacts that can occur, the L2 is a bit more linear and transparent. It all depends on what kind of vibe you're going for. I've used both without any issues at all, but my main limiter is still usually the built-in Logic Pro one.
Did you find this review helpful?yesno
»

Waves L2 UltraMaximizer
5
This plug-in is pretty popular amongst studio owners as well as home studio users. It is a limiter plug-in, similar in style to the hardware that Waves apparantly makes (though I've never encountered that hardware and don't know how it compares.) There were not any compatibility issues with Waves on my system, nor at the studio where I work part-time. The manual, which was available with the software packaging as well as in a PDF, is really clear about what to do, as well as the requirements necessary in terms of your system. The setup was really pretty easy, the wizard will take you through the whole process pretty easily. The functions are really basic and easy.

I have not had any problems with any of the Waves Plugins to date. They all work really well as long as they are used within reason. That is, don't use the L2 limiter on 20 tracks at once, and you'll be fine. If you have to use it for a lot of tracks, try and bus them to an auxiliary track. The performance with waves is really fast and awesome. I am very much a fan of it.

I think that this is a great limiter plug-in. It has a great versatility and ability to get great levels. From a mixing standpoint, it can add a greater dynamic consistency to a shaky part, or give a part a saturated, compressed sound that, while unnatural, can be very satisfying in a mix. I tend to avoid doing that so much, as there is no need for such compression, but I can think of many instances where other types of music would need it. I really like this plug-in for mastering, as it can give a great dynamic consistency to a track. If one needed to master something cheaply, this would probably be a good plug-in to use. Since it comes with a pretty solid bundle, I highly recommend this. It's definitely a little pricey, but all plug-ins seem overpriced until you think about how much you actually use them. Then you realize they are worth it.

Did you find this review helpful?yesno
»
Read the 5 user reviews on the Waves L2 UltraMaximizer »