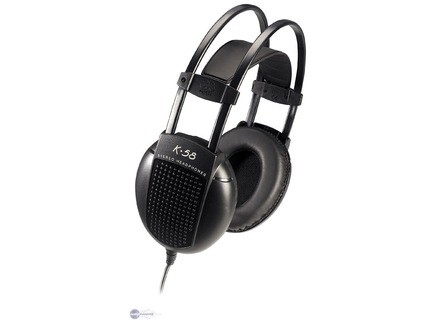 
6 user reviews
Find it in the classifieds starting at $60 Avg used price: $60

AKG K 58
5
Hello, I use the K 58 since its release and believe me has been a long time, made 27 years that I mix, I have 54 pins, I have broken the era and good, but then the lj'l'aurai, j'l'aurai, he wants my skin, it falls, you throw it to not throw your boss, you push him, he laughs, for the price it is the ball and do not trust his pace, he is alive this bougre.dj dan from Perpignan.
Did you find this review helpful?yesno
»

AKG K 58
4
to have tried a lot of headphones, that suits me. generally, it is pretty much as the ears of those to whom I lent! So I think it's a good product, solid and reliable, and I recommend it to everyone in monitoring except for situations where a premium is required.

I use this headset for batteries made in studio (recording).
I paid a small price, I needed an enclosed headphone that would irremediably destroyed within 6 months of falls, uprooting of cables and other delicacies due to severe use.

First good surprise, we can keep long on the ears without hurt (I wear glasses). it's just sometimes a little warm.
Second good surprise, the sound is very decent, good enough musician to return closed.
Third pleasant surprise for me and it is vital: it is a closed headphone that "blocks" not the ears, with this sometimes confusing feeling when we lose feeling drummer game because of a too closed headphone fully isolated. provided few repisse in microphones around me.
8/10

After a year, he remained in perfect condition, it is very surprising given the speed at which I submit, then 10/10

the audio quality is good for the price, but do not expect to make a mix with it!
it supports heavy loads and responds well to low intensities, but it is not neutral.
nice, yes.
7/10

point.barré/'s review (This content has been automatically translated from French)

AKG K 58
4
Fully agree with the fellow up above! Report qualitprix exclentissime!
Did you find this review helpful?yesno
»

narinos70's review (This content has been automatically translated from French)

AKG K 58
4
This is the best quality / price ratio I have had the hands, or rather, between the ears.
In this price range (bought new for 36 euros on the advice of a surfer), I did not expect to have such quality.
Well of course it is relative, is much beefier and more High Fidelity on the market, but I insist, at this price point, it is stunning.

What I find particularly good is its apparent lack of sound color: no bloated bass, no treble shrill, it's soft and it is punchy at the same time. I rediscovered my favorite songs with happiness.

Side spatial sound is tip top. Finally a headphone, because the music is found still between your two ears. But it was with delight that is wrapped in the sound, the instruments are well detailed, it is transported in the atmosphere of each piece.

In short, you'll understand, I love this headphone. If I put that 8 is that I've heard better, but much more expensive and given the quality of this headphone for the list price, I could not make less.

Did you find this review helpful?yesno
»
Read the 6 user reviews on the AKG K 58 »