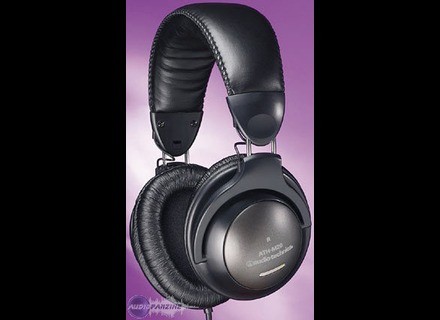 ATH-M20, Studio headphone from Audio-Technica in the ATH-M series.

The good things about these headphones are few.
They are extremely comfortable. They are lightweight and durable. They sound good.

The bad things about these headphones include:
They don't sound great. After getting used to them, I have been able to do some rough mixing with them, they work fine for tracking, but the response is certainly not flat.
A boost in the lower lows gives them a more natural punch that you normally lose having the source of the sound so close to your ears, but it is not enough to make them great studio cans.
On top of that, the so called isolation on these is a joke. I wear a hat or headband whenever I use them just to make them tight enough for a difference to be noticed.

Any headphones work fine for tracking.
Particular headphones that can reproduce the material that is being performed in such a way that it enhances the artists experience and gets them excited or in the zone about what it is that they are doing can be of great help.
I like to track guitars with these.
I also like them for recording rappers or anyone who is building around something bass heavy. They don't push the bass to an absurd extent like Beats by Dre or anything, but they compensate without over doing it.

In the end, I only own one pair of these but I'd happily buy more. Forty bucks for headphones that won't let you down is a pretty great deal. They should be rated a 6 or 7 for sound but thanks to affordability, they get an 8!
Did you find this review helpful?yesno
»

Anonymous 's review"Quality at an affordable price, with some compromises."

When I went to my friend's to try them on for the very first time, one quality absolutely dominated my attention: They were tight. Very tight. Unbearably tight for my purposes. Granted, this accomplishes a couple of things. They help prevent a lot of sound leakage, and they stop them from falling off. These are two nice qualities that I would prefer to be accomplished by better design, rather than brute tightness, but for $20, it's a quality that other headphones can't really touch. Unfortunately, the headphones still leak quite a bit, especially when the volume is turned up past a low-medium level.

As I review these, I have to keep in mind to mention the mundane things that I, an owner of higher-end headphones, have begun to take for granted. The first is the coiled cord. This is a hugely wonderful thing, as it makes the cord only about as long as they need to be. The tension in this cord is a little much when using it to listen to an iPod or a lighter device, as it pulls the device along. With heavier studio equipment however, this becomes a non-issue. Of course, most people who would use these pair of headphones all the time likely don't own a bunch of heavy equipment, so it would have been nice to see a looser cord.

The outputting to a 1/8" with a 1/4" adapter is nice, as it facilitates consumers not having to deal with the hassle of an adapter if they choose to use it for more consumer-oriented things like computers and mp3 players.

As for studio use, its tightness is wonderful; if wearing while recording, there's just about no fear of them falling off. I would never use them to mix however. Even if you get over the disadvantages of not having monitors, the Audio-Technica ATH-M20s are not at all suited to it; the higher-tier models will be better all-around for that.

However, since this sits right in a consumer price point, the Audio-Technica ATH-M20s are FANTASTIC value, and if you were doing a lot of this, I would not hesitate to grab a pair of these at all. If you were in a studio, I'd say shell out a bit more for the next tier up, the ATH-M30's. If you had money to spend, the ATH-M50's are unfairly good. But that's a whole different ballpark. The ATH-M20's are a great pair of headphones.
Did you find this review helpful?yesno
»

Audio-Technica ATH-M20
4
The Audio- Technica ATH -M20’s are pair of studio headphones, which i have been using for the past four months. The first thing that I noticed when I put them on is how tight they are; I actually thought they were too small for my head. Turns out that super tightness is something that helps a lot when you don’t want your headphones to leak. I am not saying these are leak proof because when you turn your headphone volume up they will leak, but if you keep it fairly low/medium the leak is not really noticeable. I had used other earphones in the past, although they were not studio types and the ATH-M20’s where a huge improvement from ear buds. They feature one chord coming out of the left earphone which I love, I don’t know about you but I hate when headphones have two wires, it makes using them very annoying and they just get all tangled up. Also, it uses a phone cord, which just looks cool. It has a mini jack input but comes with a gold quarter inch adapter. It’s up to you if you like this or not, I personally like it because I can use these earphones with say my iPod when I go out. The M20’s are great for earphone monitoring as well, not perfect, but do a damn good job for fifty bucks, I have mixed on them a few times and the songs sounded great on other systems. One thing I would change about them is a removable cord, I am always so scared that I will break it, and then bam, I’m out 50 bucks. All and all I think that the ATH-M20 headphones from Audio-Technica are a solid pair of beginner studio headphones. However if you have to extra 30 bucks, which isn’t much, I would advise you to get the ATH-M30’s. They are all the better for those extra thirty dollars and wish I had slowed down and gotten those instead, take my advice and spend the extra thirty, buy the ATH-M30’s and become a very happy man or women.
Did you find this review helpful?yesno
»

Anonymous 's review (This content has been automatically translated from French)" Simply astonishing for its price!"

Audio-Technica ATH-M20
5
How long have you been using?:


Did you try many other models before buying it?:
Oulaaa yes ... a lot in the same price range (Sennheiser, Sony, Thomson, Behringer, Panasonic, and many others ...)

What is so special that you like most and least?:
The Plus: Its clarity in the sound, and to wholes levels (serious acute).
A production that seems robust finishes (to be confirmed in the long term).

The -: as already enumerated in previous reviews: the spiral cable (not always practical)

How do you rate the quality / price?


With experience, you do again this choice?

Without hesitation!
Did you find this review helpful?yesno
»
Read the 8 user reviews on the Audio-Technica ATH-M20 »