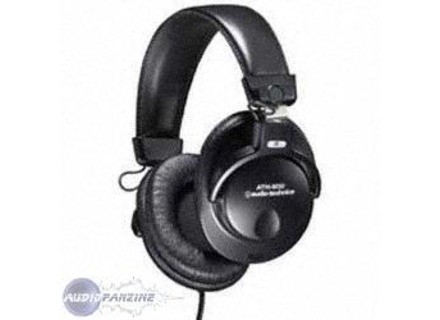 ATH-M30, Studio headphone from Audio-Technica in the ATH-M series.

Audio-Technica ATH-M30
I use them for sound recording and listening on the move.
Comfortable enough for short times, but if you listen to them too long, you ears get really hot.

Pretty robust, I usually take them along with me and they are still in very good shape. Their weakness are the cushions, which get damaged right away.

Very pleasant sound for easy listening. The low mids are way upfront and they lack some very high frequencies and deep lows. Fine for recording. Bad for mixing due to their lack of precision, especially in the low mids, and balance, they are flattering, making them a trap.
I gave them 7 for the listening experience, but if they are intended for mixdown, I'd give them 4.

I would buy them again...Actually I might buy another pair soon!
Did you find this review helpful?yesno
»

asferion95's review"Good sound reproduction, but not for long listening sessions"

Audio-Technica ATH-M30
I use these headphones to connect them to my keyboards
Nevertheless, my ears are sore after only an hour

They seem solid, the headband is comfortable.
Jack connector in two sizes with screw adapter

Balanced response, the lows are a bit weak, but they are monitoring headphones.
Good sound level
Good isolation

I've used them 1 month
I hesitated between this model and the AKG 240 MK2, which costs twice as much
Good value for money.
Not enough time has gone by to make an objective appraisal

Audio-Technica ATH-M30
I listen to music and write songs with them (although I haven't been writing much lately)
I listen to electronic music and Hip Hop.
These headphones are so comfortable and light that they seem to have been molded to my head.
A real delight!!!!!
Finally the right headphones :D

They seem solid, detachable connector included
I haven't used them for a long time, but I think they'll last.

They sound neutral, without too much bottom nor too much high end, even though you can feel the highs. But they are pretty cool.
I have the impression of having my Yahama HS 80 in front of my head, it's awesome.

I used to have a pair of Sony cans, which I thought were good.
But the sound was very poor, unlike with these, whose sound is beyond comparison.
I would buy this brand again without thinking it twice, they are really pro, and for this price, they are amazing.

I bought them on ebay, in case you find it useful.

I wouldn't really use them to mix, having a set of higher quality headphones at my disposal, however, as with the ATH-M40FS's which I may have blasted earlier, I do certainly feel that at their price point, they aren't bad. They're noticeably lower in quality than the next tier of headphones, but that doesn't mean they're bad. Personally, I wouldn't mix with these at all, having a pair of Sony MDR7506's lying around. However, I would not have my standards discourage anyone from mixing on these. While I wouldn't do it, it's certainly doable.

They're also quite comfortable as long as you don't move around too much while you are tracking. It's unfortunate that they do feel slightly cheap when this happens. That's why the Audio-Technica ATH-M30's are best suited for sitting around.

If you're serious about mixing however, you'd buy a pair of monitors. Barring that though, since they are prohibitively expensive for the home studio owner, if you really want to mix, I would suggest investing in a quality pair of headphones, like my Sony MDR7506's, some of the Sennheisers that come between $100 and $200, or the Audio-Technica ATH-M50's. Those are a true investment, and even then, I wouldn't discourage getting some ATH-M30's for tracking and monitoring and A/Bing.