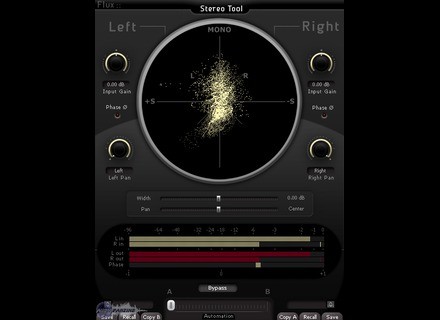 Flux :: Stereo Tool [freeware]
4
The Flux Stereo Tool is a free piece of software that is available as a free download in a number of different formats straight from Flux's website. The whole process of downloading it and installing it only took a short while, as I didn't encounter any problems at all. You can download it in RTAS, VST, or AU formats, making it compatible with just about any DAW, so this shouldn't be a problem either. The make up of the plug-in contains parameters for left and right channel input gain and panning, and it also has sliders for general pan and width. There is also metering in the form of a large graph and as well as for monitoring your phase and output levels. There isn't all that much that you need to know about this plug-in, so I don't believe that the assistance of a manual will be necessary.

I've only had a need to run a single instance of the Flux Stereo Tool within a single session, as it is the type of plug-in that I use on the master fader channel of a session. I'm running the plug-in on a Mac Book Pro that has a 2.2 Ghz Intel Core 2 Duo processor and 4 GB of RAM. I run Pro Tools LE 8 with a Digi 002 rack and I can't say that I've had any issues running the plug-in within this configuration. It's hard to tell how well a plug-in will run on a certain system until actually trying it, so you've really got nothing to lose in downloading it and trying it out.

I don't find myself using the Flux Stereo Tool very often to be honest, but I have used it on more than a few occasions. I like the clean sound quality that it projects, and I find that it does a great job of spreading a stereo sound. I don't think that I would use this on a final mix for a record or anything like that since I usually will leave that to the mastering engineer, but if I'm doing a home mastering job it's definitely something that I'll consider using. Don't let the fact that this is a free plug-in fool you, it's definitely of a high quality and can be very useful. I probably wouldn't buy this plug-in if it wasn't free since I don't use it very much, but since it is free, there's really no reason not to have it!

Published on 05/19/08
Flux has released a freeware plug in for Mac and Windows that is designed for precise control of the stereo image.