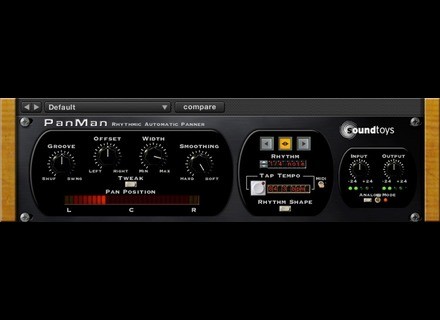 All user reviews for the Soundtoys PanMan

Average Score:5.0(5/5 based on 1 review)
Buy this productView price information >
Not satisfied with those reviews?
Our members also liked:
Buy at Plugin Boutique

Soundtoys PanMan
5
The SoundToys PanMan is an auto-panning plug-in that is more in depth than most other panning effects and features. It's available for all systems, so as long as you have the properly compatible files, you shouldn't have any problems with installation. I didn't install this plug-in in particular, but I've installed a few other SoundToys plugs and the process has virtually been the same so I wouldn't expect it to be any different here. The interface of the PanMan plug-in isn't complicated, but it's also not the simplest plug-in that I've used or seen before. Since this isn't your typical effects plug-in, it will take a minute to get used to all of the parameters and to figure out what's going on, or at least it did for me. The controls that the plug-in has include knobs for groove (shuffle on the far left, swing on the far right), offset, width, smoothing, and for input and output levels. It also has a section for setting your tempo, rhythm pattern, and rhythm shape. As you can probably tell, at first it's somewhere in between in terms of being user friendly, but once you get the hang of it it's pretty easy to use and I wouldn't think that you'd need a manual.

That system that I have run the SoundToys PanMan plug-in on has been all Pro Tools HD based. We have a number of different Soundtoys plug-ins at the studio, a few of which I also have at home. This one I don't own myself, but have used it a good amount in the studio. We never have performance problems with plug-ins or otherwise since all of our systems are HD, so it's hard to say how this would tax your system in an LE type of setting.

The SoundToys PanMan is overall a really awesome plug-in and is one unlike any that I've really seen out there before. Most people will use panning automation in their DAW to get the job done, but this has features beyond what your audio software will be able to do. This is because it's really more of an effective plug-in than it is a traditional panner, as you can get some great spatial effects with this, as well as more traditional panning spacing. I love that you can set the tempo and all that, as it makes it easy for your sound to match up with what is being played. The overall sound is superb, as I wouldn't expect anything less from SoundToys as all of their plug-ins are of a high quality. If you're interested in an in depth panning effect station, the SoundToys PanMan is the way to go.
Buy at Plugin Boutique
Did you find this review helpful?yesno
Cookies help us improve performance, enhance user experience and deliver our services. By using our services, you agree to our use of cookies. Find out more.