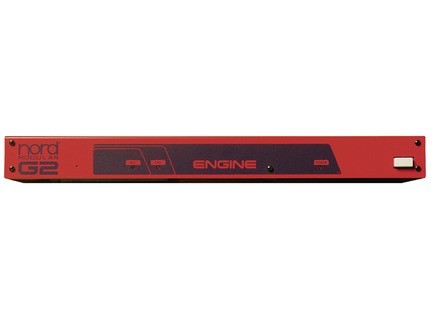 Clavia Nord Modular G2 Engine
4
The Clavia Nord Modular G2 Engine is a somewhat special because expander exept the power button, it possde any other button. All programming of the sounds is done by computer, PC or Mac.
The CONTRL sound requires a matre exclent keyboard worthy of the name and a MIDI-Controller to output a maximum.
CHARACTERISTICS:
32 votes and 4000 storage space for sounds and polyphonic performances.Le votes dpend the number of modules used.
The design principle of sounds is similar to the modular analog synth modular but a thousand times more complex.
Modules 156 are diposition prt be interconnected.
Are you missing a dsp for one of your synths? 2 audio inputs (line) can be related by the filters that you CRER be synchronized and noon.

The construction of sound modules ncessite synthtiseurs a good knowledge of and is not recommended to beginners.
The manual is inadequate for beginners and ncessite English. I proposed elsewhere complmentaires some information in French on my site. In priori MIDI CONTRL up the Modular G2 Engine www.armuco.ch (http://www.armuco.ch).
You will also find information and patches for the programming. Once the grip is matris this machine does not let go.

Trs sounds varied and flexible infinity. The potential user is left CONTRL and twelve o'clock Controller available.
Fast Fashion for the engine sound is used to re-create top.Il a wide range of synthtiseur. Among the things missing, there aun module to play samples, a wavetable and morfing wave. But hey, when you must leave something the same concurrency. Once crs sounds you do not need a computer to play the patches.
There is also an expansion card which doubles the number of votes, it is especially useful if you useful cells (stack) or if you DSIR schedule squence using multiple patches. Installing it is not complicated trs, you will find moreover a description on my site www.armuco.ch (http://www.armuco.ch)

After a few days of use, I notice a small problem using paramtres noon. Sometimes when qu''envoi a little wild for sailing south, for example, program change noon in order followed a dlais trs fast, can crash the machine. It is then necessary to dye and to rekindle the "gear".
The exprimetal ct is the major asset of the rack. The use seems more conducive to live that a command from a squenceur, which seems the most complex to get a minimum capacity of the G2 instrument.Si you use the patch just to play a a can go, but you will need a lot of control and MIDI controller on the slopes of the CONTRL squenceur to really. If you look at my site you can get an ide of the complexity of the machine. Www.armuco.ch (http://www.armuco.ch)
Did you find this review helpful?yesno
»

bb dreamer's review (This content has been automatically translated from French)

Publisher Designed soft extraordinarily well, A model of the genre. We can not do better!

Above all, do not rely on DMOS Clavia MP3 site that are frankly not that good ...

It is a hot opinion since I've had two days only.

the potential noise standard! the editor and the quality of sound (much better than Reaktor).

the -: I / O asymtriques the lfo rising 400Hz max (when going up lfo 20Khz?) rsonnance filters not terrible, but there's always a way to arrange this by patching the right modules in the right places

Report qualitprix more than adequate, I no referrer hsitation this choice.
Did you find this review helpful?yesno
»

Clavia Nord Modular G2 Engine
5
EDIT: just to say that I confirm my opinion a month later, huge!
I warn you my opinion is not reasonable because I&#39;ve had this afternoon but I know the basis Clavia Nord Rack 3 coming from and having a lot triturated demo software in recent months, I get to land already known.
I&#39;m not too much to the delight of novelty, to reassure you;]

Integrated power supply does not heat (that&#39;s 13 hours of rank one), saw Clavia!

Extensive MIDI implementation and on-demand, there are 8 morph groups: 8 knobs with just understand it can drive 8 X 25 knobs, nothing but already there is much to do.
If necessary we can add controllers and modules noon without pb but is it really useful so have can produce sounds rich and moving to the base?
By patching well with a single knob is made of "miracles" have.

4 multitimbral tracks, four audio inputs and 4 outputs.
It does only good omen for the external treatment, I will update on this.
Especially as compared to the old Nord Modular SLOTS ON THE CABLE CAN THEM Youhou!!

In the synth you can store 32 banks of 128 sounds and 32 banks of 8 performance (performance is actually a synth on each channel / slot so 4 synths up, as on the north lead ).... simply enormous, 3 rack on the north was already impeccable level backup, but there ...

Use for improvement in the sense that it would have been able to select the Royal Bank and patches directly on the rack, it is at once required to do so by a midi controller.

The installation went smoothly in 2 minutes, synth recognized immediately in the editor.
Editing is simple or complex ... see very complex depending on how you patch, everything is free so it&#39;s huge and awesome.
With this release a good midi controller rack as it comes out now with small screens showing the names of the parameters can be perfect I think for use without a PC.

I bought a paper manual OCCAZ provided, I hope that nine is also provided because it is so, a few months or weeks of potash and testing perspective!
But it is also "instant gratification" starting to patch without reading it with some basics of synthesis, no problem editor is well done

Clavia textbooks are quite nice and complete, this one is no exception except that some modules or examples could be more detailed I find, if not the basics of subtractive synthesis, FM is written for beginners but it will be documented In addition to push a little modular synthesis.

Resources are not lacking for the Nord Modular.

Well it&#39;s already slap against the North Nack 3 bass that was lacking for my taste are present here a pleasure and suddenly I&#39;d say it sounds even hotter.
(Note that I just let go one analog task, especially in the low to pay me, it&#39;s not as big or fat or what we want ... but it&#39;s good!)
I tested by putting a simple vco / vcf / env / vca and well ... it sounded cool!

In fact since this afternoon I&#39;m hallucinating the sounds he can produce.
It is always typed keyboard but more punchy and "bassy" the NR3 .... I&#39;m in heaven.

By downloading some patches we quickly realized the scope of sound is wonderful, I already liked a lot the North rack3 despite its delicacy, but here is even better, a step up.
For filters that are very effective BBdreamer I joined just because I like this side of the analogue but the comparison is pointless because I think there are 1000 ways to use and are more varied.
Note that they still ringing in their class do not worry, I was able to compare (EMU 6400, microwaveXT)

The effects here too there are 1000 ways to use them in a very modular and it create more if it does not fit so if the reverb is to be more widely used.
The delays seem to eat a lot of resource on the other hand if we go to two seconds or more.
Effects in themselves are very traditional and lack a bit of fun, but hey it does not matter at all ... we are in a modular.
effects come out of the lot, at least by its name: the scratch, which looks like a pitch shifter, but actually does not sound quite like tt.

I put a 10 steps stolen because it&#39;s incredibly rich, the only limits we are with this kind of machine.

The price / quality ratio is excellent, paid € 600 in OCCAZ slightly more than half the price of an NR3 .... for me that was frustrated by the fixed architecture there&#39;s no picture if one is willing to editing on a PC. (This is not death either)

The power of a G2 in a 1U rack paying too much mine as it is small (if not top quality c) is simply HUGE.

dookieW's review (This content has been automatically translated from French)

Clavia Nord Modular G2 Engine
5
Just click here expander modular (sounds electronic edition with a computer image of an analog), as you say, if you search for sounds of piano or violin is not worth it!
Connectivity: USB (for editing the synth and banks via a PC) MIDI THROUGH, IN, OUT DIN for use with a master keyboard (which I did); 4Outputs 1 / 4 jack (2 per 2 according to the edition of the outputs from the software) as well as 4 Inputs 1 / 4 jack, a jack Headphones 1 / 4 jack too.
You can put what you want, oscillators, LFOs, filters etc ... until the DSP no longer supports, in addition there is an extension (hardware) as you say that the possibilities are infinies.La polyphony is enough lean at first, is better now to the extension sooner or later
I put 8 because of the polyphony and there have not in the preamp input for microphones.

... This is the configuration of modular vrément therefore not simple at all, at the beginning you wonder if it is necessary to be container 8 in electronics to understand, I who am just end after 3 months I begin to understand how to make good sound (electronic knowledge can be an asset to understand more quickly but not essential).
The edition is as it sounds on an analog, Oscilo, filter, envelopes etc ... with sequencers and stuff that are reminiscent of analos.
It connects with any wireless and sound enclosures sprung!
I put 10 because for such a potential, I find the perfect interface

I play with just about everything, I use it in a group of post-rock atmospheres (FX and pads galore), to make the big electro music, the experimental, the advantage of modular is an exploration not only limit or barrier is the imagination.
The effects are simple and effective.
If the patch or performance is to program the synth responds very well to aftertouch and the vélocitée.
Sonoritée I like, I say "experimental", although the big FX and some murky sounds very electronic.
FM sounds (by the way they are put a package) I find it vrément ugly, cheap and sounds cheap but very ugly kind
I use an arranger keyboard on stage for piano sounds, although there are some very interesting simulations pianos on G2
I put 9 because banks are afraid of origin even when some (hopefully we can all sounds architecting, and download and edit)

I have this synth for 3 months at the beginning I was completely lost as compared to G2, the engine needs a powerful master keyboard, so must be familiar with the agreement of the two machines.
its kind that is unique synth at the beginning I was a little disappointed because I did not arrive till the sounds out of banks (only patches) without being able to change anything with knobs, then I learned, and I find it more and more terrible, we can do a live well with this little red box is very powerful.
It's expensive for sure, but I find the synth that I must
With experience, I would buy even earlier!

Did you find this review helpful?yesno
»
Read the 6 user reviews on the Clavia Nord Modular G2 Engine »

View the 9 files about the Clavia Nord Modular G2 Engine »