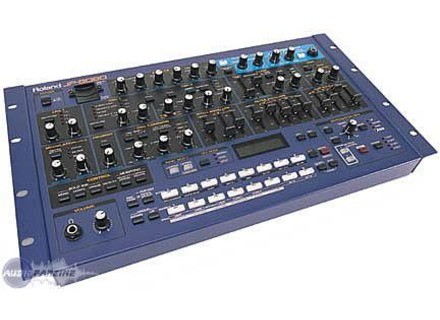 Roland JP-8080
5
Seriously missing: more MIDI features: the machine is only 2 parts multitimbral - only 2 MIDI parts, and should have the capacity of 16 MIDI-parts (or at least 8). I really don't know why Roland made this machine with a lack MIDI parts... That makes the JP-80x0 alot weaker. Missing: more and/or better FX on board.

Sound quality overall: good upto very good for any kind of analog-type sounds - especially focused on all kind of dance music. Some people are talking about some 'tick' or 'click' when using the filter, but I had no problems with that yet. Excellent for strings/pads/sweeps. I really love the great warm sweeps. FX: too less sound FX onboard, with less good quality

The JP-8080 is a very robust 6U rack, never had any problems with knobs nor sliders. No crackling. Clean inputs/outputs. Customer support: N/A

After buying, I was thinking I made a wrong choice (but I wanted a JP-80x0 'cause at that time everybody was using a JP-80x0...) But the longer I have my JP, the more I love it. Also used by William Orbit, Faithless, Paul Van Dyk, Ferry Corsten, BT, Goldie, and many many more...

Roland JP-8080
5
The features are based around old analogue,but,there is a certain kind of eccentric fun about the fact that access virus and novation have more but,not nearly as closly honed to production and simplicity as the 8080. the midi is much of a let down on a system made by the guys who realy invented poly midi ,as the d-10 was for the synth generation of the 80's, it wasnt anywhere near the best at anything but just like the 8080 its the fun and sounds that kept its place in history

Incredible easy sythns are about mistakes and happy accidents when building patches,dont get me wrong this has great building presets,but who uses just presets?we all like to tweak to make the sound ares and,this is where the 8080 kiks ass u tweak then tweakthen set the motion control off and BAM tyhe sound is exactly like u hear in ur head!! Try doing a sound when ur drunk then listen to it when ur strait and u will get what im saying!!.the manuel is from roland(japanease into english direct tranlation)which means its useless unless u wanna know how to turn the unit on or off(otherwise get a good japanease language teacher!!)

this thing is made from solid steel ,the buttons might have well been made from heat ablative tiling the space shuttle uses ....U CANT BRAKE IT... but seriosly the build quality is fantastic!! c/s n/a

The sound quality from the outs is(with balanced wires)eccelent ,i own a supernova2 and a trinity,and it beats them! noiseless with a crocuss of sound in synths pads thats genarally not there in other units plus i got a staight 80 hrz sine that nearly lost me my bowels ,clean and crisp highs aswell(ps its best 4 ambeint and dance)The effects are crap.sorry but they are when u compare them with nearly any other synths that are on the market but the distortion ripps like a bullet throu noisy mixes with a surprising quality!(roland usually do crap dist)

I own a supanovaII a trinity a mc-303 a d-10 a dx-7 a tb-303 tr909 but for some reason whatever my mood i can still spend 4/6 hours tweaking with the roloand jp8080 and NEVER GET BORED it is and always will be my friend and allie,it does exactly what it says it does and does it to perfection nearly everytime.think of it this way u could have a F-1 ferrari and love it for 1 hour...or get a mini cooper,its never gonna be as good as the f-1 but it wont brake down u cant snap it around audio bends and then crash it ....but its still there doing what it does and for no apparent reason u just love it it allways comes through... for me its the greatest runt of all time i LOVE it ,,....(mostly

Roland JP-8080
4
Ok I'm going to have to say that it could use more filter types, especially a OVERDRIVE/SATURATION option, and more polyphony. Multitimral is that big of a deal (its old) but the polyphony gets annoying with pads. Another thing; MORE EFFECTS! The effects on this thing are pretty lame, basically chorus and phaser and delay (variations on them) with a crappy distortion. Only 2 effects per voice! LAME. Another gripe; the notorious MIDI debacle (there is 2 inputs and no thru)! The MIDI setup coherency (or lack therof) is annoying. Roland could do better. Other than that it has all you expect on a VA synth plus the x-mod which is really cool.

MIDI as I said, is mildly confusing, but other than that its ease of use is average.

Got it used, and it has worked just fine. Seems tough and well built.

The jp-8080 has a great gritty VA sound, along with the infamous supersaw, plus some very original new waveforms; making it a very virsatile synth. It can also be a warm pretty synth if you program it right, which shouldn't be a challange to anyone who has worked with synths. Let me say something about the supersaw real quick; yes, it sounds great, but there is TONS more to this beast that people seem to have neglected (shhh don't tell anybody!). Explore this famous VA!

I like this synth a lot, but I don't quite &quot;love&quot; it, maybe not yet

manachild's review (This content has been automatically translated from French)

Rack jp 8000, many lead sounds, fxs and bass. To me, sounds of reference in the field of goa trance. With the possibility of modulating waveforms and filters. Need I say more? This bike is essential to a home.

2 years of use and I find out a little more each day. A rack that I will not sell.

2 of 12 people found this review helpful

Did you find this review helpful?yesno
»
Read the 11 user reviews on the Roland JP-8080 »

Roland JP-8080 manuals and other files