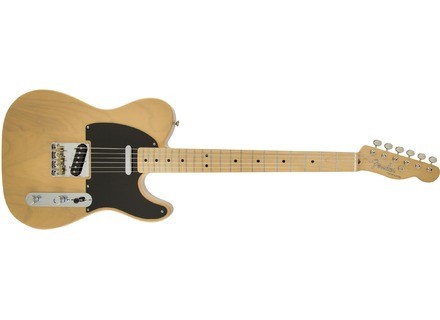 Fender Classic Player Baja Telecaster
3
Bought this a Hesse Music in Johnson City, NY about 8 years ago. With a small 15 watt amp it was about $400.00.

Love the sound of a tele, the feel of the neck is good, not top heavey. Easy to play with the small narrow neck.

On the original there was a staic sound coming through the pick gaurd and was very annoying. After taking it to many shops no one could produce the sound but me. I sheilded the pick gaurd and even rplaced the old one with a celenoid pick gaurd with sheilding. Then after talking to an einginer at the TV station I worked at said to ground the bridge pickup. Now it really cooks except for the noise in the selector switch. With that I use some tuner cleaner evry once in a while and that works for me.

Vary solid body with the old paint because it was painted in Mexico. You can't use that kind of paint in the USA so it has a nice blue matalic paint job. I replaced the original pick gaurd, added copper sheilding, and grounded the bridge pickup. This should have been done at the factory.

Bottomline is that if you want a Tele don't just get a Fender look around. There are many good guitars around that look like a Tele but are finished guitars from a factory and not the unfinished guitar I bought from Fender at a shop.

Fender Classic Player Baja Telecaster
5
I went to a local store to BUY the new 52
re-issue tele. I've owned a few "Vintage"
Strats and Telecasters, and I know how they
sound and feel. Beter still, I know how they're
NOT supposed to feel!

Well, I played the 52 for a bit, and while waiting
for the salesman to take it and put it back in a secure
spot I set it into a stand that had previously been occupied
by a $230 USED Mexican Tele.

Hey, who could resist a head to head, side by side comparison???

I gotta tell you, shock is a mild expression for my
impression of that little sunburst beauty.

The feel was excellent, and the sound was just what I expected a
tele to sound like... I bought it.

Outstanding, as good as any Fender I've owned,
and better than some.


Don't hesitate a second to buy one if you're on
a budget. Even if you're NOT on a budget,
they make sense... that is unless you have a problem
with NAFTA

heads on fire's review"Nice, but S-1 is unnecessary."

This is a nice Tele! My favorite guitar that Fender ever introduced is the Telecaster, and a good Tele is one to hold on to. I read somewhere a quote from an ex-Fender employee that worked with the company in the very early years. The quote said something like "We all knew Leo's first design was his best, but nobody had the heart to tell him." I agree with this statement. The Telecaster is one of the simplest, yet most solid guitars around, offering rock-solid tuning stability, crystal clarity, and excellent playability. This Baja Classic Player Tele is no exception. It offers everything that a great Tele should have...

...however, Fender did one thing I'm not a fan of on this guitar. They included the S-1 switching system, which allows 6 different sounds total. Usually, I am all about that kind of variety, but these extra sounds aren't really that different from the originals. I like the original 3 tones of a Tele better than the additional tones here, to be honest. In trying out this guitar, I checked out all of the settings, and I never went back to the newer S-1 sounds. I feel like it's a waste of electronics, and just overly complicates the guitar. It's by no means a space-age guitar, but if one had to make a simple soldering adjustment, that extra switch could throw them off, and I don't think the quality of the extra sounds justify adding more circuitry that could potentially fail.

Overall, this guitar is a winner. But the S-1 switching is unnecessary bulk that just raises the price of the guitar. I'd rather pay $50-100 less for the same guitar minus the S-1. It really is a good axe, it just doesn't need this fancy switching. It's a Tele!
Did you find this review helpful?yesno
»

Fender Classic Player Baja Telecaster
4
This is a custom-made Telecaster pickup, one that is not readily available in every Telecaster on its own. It is made by Fender's Custom shop, so it isn't mass produced. They are only available in certain guitars, they are not sold regularly, which makes them difficult to find. I was lucky enough that somebody pointed this out to me when it was in a really cheap Baja Tele.
This particular model is only for the neck pickup, as they haven't made it for a bridge pickup yet (probably because there isn't a demand for one.) I tried it because I heard that it sounds more like a Strat pickup, and I wasn't particularly thrilled with my own neck pickup on my Tele. So I tried it out to see what happens.
I researched and found that this pickup uses bigger magnets and has longer magnet rods than a typical Tele pickup, which helps explain the difference in sound.
After getting it wired at my local shop (I am really not that good at doing the wiring on my own), I brought it home to check it out on my Fender Twin. I immediately noticed that it was a lot clearer than my original Tele neck pickup was. I liked this a lot. It was definitely similar to a Strat in terms of tone, it has warmth as well as a clarity about it that the Tele didn't. The original Tele pickup was definitely muddier overall.
Right now, I can't decide whether I like this pickup more than the old one. I have a Strat, so I'm not sure I really needed my Tele to sound more like one, too. I like having the option of switching between a Tele Bridge and a Strat Neck pickup, but I can't decide if I wouldn't have been happier with the original Pickups.
Either way, it's a great pickup, one that it is rather different for telecasters, so I'd recommend checking it out if it sounds appealing to you.
Did you find this review helpful?yesno
»
Read the 31 user reviews on the Fender Classic Player Baja Telecaster »