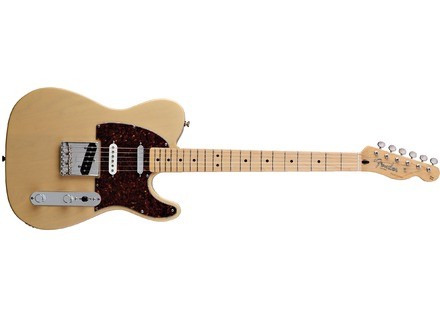 Fender Deluxe Nashville Tele [1997-2015]
5
Very universal instrument. Great workmanship,Sounds excellent,Very different setup from a regular Telecaster but, usable tones and, plays nicely. Even thought this Telecaster is made in Mexico is it a Great value. I own a 1976 American Telecaster and, this Mex Tele is a comparable guitar. Play through 1965 Fender Twin Reverb. I play Classic Rock and, Country and, this guitar fills the bill.
Did you find this review helpful?yesno
»

If you are looking for a decent guitar at a great price I would say the FENDER TELE NASHVILLE DELUXE is THE best bargin in the FENDER line. The guitar is very well put together and the neck is superb. Also, the five position pickup switch gives just enough variations with the hot TELE TEX-MEX pickups at the bridge and neck, with a hot TEX-MEX STRAT pickup in the middle, to satisfy anyone looking for sonic bliss.

There is NOTHING I don't like about this guitar.

Having owned American Strats and Japan Tele's, I'd say this is just as good if not better in the fit and finish. Everything is tight and needed nothing tweeked. It was set up right from the git-go.

Don't pass this one by for any reason.
Check one out before you buy any other Fender guitar.

Fender Deluxe Nashville Tele [1997-2015]
5
As a now regular customer, I purchased this guitar from Express Music, Shirley Solihull for £560 (rrp £580). I bought this having been considering an upgrade from my Squier Strat. I was thinking along the lines of Epiphone SG's and LP's and may be something like a Fender Standard Mexican Telecaster at the limit. However I half heartedly picked up the Nashville and it instantly felt right in my hands- and so I asked "How long do you keep deposits for!"

Its Great full stop. Its a telecaster which is a brilliant guitar in general. Its attractive, brown sunburst on turtle shell pick guard. It sounds amazing, texas pick uos with the addition of a texas Strat pick up in the middle position and is very adjustable. It has a whole customised vibe to it, the strat pick up, old style kit, turtle shell scratch plate, chunky neck and frets etc. This is certainly a unique guitar that looks great, sounds great and is great. It isnt even as heavy as your average Telecaster.

Only one thing- That would be the bridge. Its a pressed vintage unit with the words fender pressed onto the plate. below the pick up its a rough pressed finish whilst above its polished. This has no other effect than aesthetics although its isnt particularly nice. This I imagine is to restore a vintage appeal although could be mis-construed as being cheap but its not really that bad. It'd also be nice to see the Feb=nder name on the neck join plate.

Brilliant. Not a single problem as yet. Tiny marks are a result of the shop, not production, nothing to moan about.

Fender Deluxe Nashville Tele [1997-2015]
4
I purchased this new from Mars Music for $500 (scratch and dent deal). This is a Mexican Tele with the 3 pickups and the Fishman Power Bridge.

I am playing mostly Country music now, and my faithful Yamaha RG series just couldn't get the "twang" I was looking for. I went for the "Power" model hoping to duplicate acoutic tones to avoid swapping guitars in the middle of playing.

The 3 Tex-Mex pickups sound great, everything from Country twang to great blues growl. If you want metal, thoguh, go elsewhere. That's not what this guitar was made to do.

The Fishman Power Bridge is capable of more than I've been able to do with it so far. By itself, it sounds good, but not great. When blended in with the regular pickups, though, it adds a great dimension to the sound. Fills it out nicely.

I think the trick to getting the most out of the Fishman bridge is to split the signal (Guitar comes with a splitter cord) and send the acoustic signal to a different amp than the electric signal. Then you could tweak the amp to get the best tone out of each. I hope to take the time to play with this soon.

Shallow as it sounds, I like playing a guitar that looks country. You can't beat a Fender Tele with the Brown sunburst finish.

To change batteries (power for the pieze bridge pickup), you must unscrew an access plate in the back. The battery seems to last a long time (I've yet to change it in 4 months of playing), but I am concerned about wear and tear after 10 - 20 years. It would have been nice if Fender had put in metal inserts for the screws, or had a pop open access door.

The guitar seems very well made. The finish is excellent.

The only problem I have had is some intermittant noise from the output jack. The Fender repair facility near me assures me they can fix it right up (under warranty) as soon as I am wiling to part with the guitar long enough for them to fix it.

While not an inexpensive guitar, it is a good buy for the money. Very versatile sound, play great and looks great.

If it were ever destroyed or stolen, I would replace it as quickly as possible.

This review was originally published on http://www.musicgearreview.com
Did you find this review helpful?yesno
»
Read the 15 user reviews on the Fender Deluxe Nashville Tele [1997-2015] »