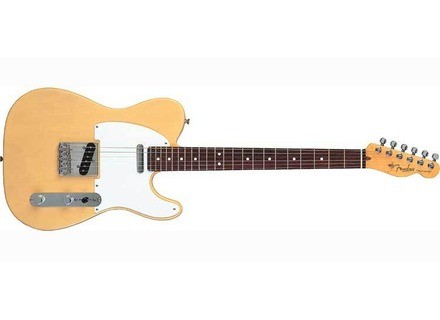 Highway One Telecaster [2002-2006], TLC-Shaped Guitar from Fender in the Telecaster series.

I like the jumbo frets.
The neck pickup rocks.
I love the two tone sunburst finish.

What's not to love?
It's the original Tele!

It's a Fender, need I say more?

While this is one of the more expensive guitars that I own ( hey I'm on a musician's
budget), I am thrilled with the bang for my buck!
I own a number of Teles.
They're all great.
However, Fender out did themselves on this one.
Just amazing!

Fender Highway One Telecaster [2002-2006]
2
My guitar was purchased through Musichaus Thoman Cyberstore by mail order. I paid by credit card total pric inc. delivery £438. I have always played Fender or Fender copy guitars and was tempted by the thought of a genuine Fender USA tele at what seemed to be a bargain price.

The guitar does have a classic tele sound due to the Alnico magnets and pickup style and configuration. The neck is well fretted and straight, and the machine heads, string retainer and control strip appear to be identical to the more expensive American series.

On the down side - the matt finish described as letting the sound breathe (who are they kidding!) falls off easily. The flimsy neck plate indents where the screws tighten and they couldn't be bothered to write Fender on it, and worst of all, I'm informed by Fender Europe that my nice all American Tele doesn't have USA pick-ups as the American series.

The construction and quality is no better than you expect from a Korean import which are generally pretty good. The woods used are plain and unatractive and in the case of the body - segmented I'm informed to five pieces.

Although I realise this is a relatively cheap instrument, Fender are clearly profiteering on a classic design by cutting a lot of corners. My advice is if you're more interested in quality not name buy a Japanese version. As a guitar teacher and player of 35 years I can tell you that the 70's guitars were generally poor. The company's latest offerings only just represent value for money at the high end, but not the Highway!

Fender Highway One Telecaster [2002-2006]
4
I got this guitar from musiciansfriend.com. I paid about $600 for it and it came with a deluxe gig bag. I got it because i've always liked fender guitars and i liked the sound the tele made over the strat.

I definately like the tone of this guitar. It really can create a wide range of sounds and alll sorts of textures using just your amp and volume and tone controls. I also liked the simplicity of the controls and the sound from having just two pickups. the action was set up great right out of the box , but the intonation was a little off. This guitar cn get any sound but it is rather diffcult to get really muddy blues sounds or bass heavy hard rock sound like it is with all single coil guitars. The price was also a big plus getting an american fender tele for only $600.

The bridge has only three saddles so it is not as customizable as a six saddle version. The finish (mine is a three tone sunburst) is very easy to scratch. The thin lacquer coating lets the guitar get great tone and lowers the cost, but gets scratched by my belt buckle during plain and just from the pick during heavy strumming. The tele also doesn't have a tremelo unit, but that is part of the character of the guitar, also it is not nearly as comfortable to play standing as a strat but I think the tone more than compansates for that.

The quality for the most part was excellent. The frets were finished well and the volume and tone pots have a steady impact through the whole spin. The neck pick up on mine squeled very bad, but when i called the musiciansfriend customer service they helped me get the problem solved with no problem. other than that the only other issue is that part of the rear pick up hole is exposed, but that is only noticable from about two inches away.

If you want the real american tele sound for only $600 then buy this guitar. If you have any oroblems the customer service is great. However if you like styles like heavy metal or a more bass heavy bluesy sound you probably shouldn't be klooking at fender guitars in the first place. An excellent guitar for the money and an excellent first "good" guitar. Give it a four because nothing is perfect.

I like pretty much everything about this tele, it sounds incredible, its very smoothe to play. The look of this guitar...beautiful. This is a all around wonderful insturment.

I wish i could drive it a little more, it can get pretty hot. But sometimes thoes stock fender pickups cant handle too much.

Well, everything i have takes a beating, and its held up. If you knew me, you would know this is a good thing its still togather.

The bottom line is, this is a great insturment and i recomend it to just about anyone who wants a great guitar with incredible tone.

This review was originally published on http://www.musicgearreview.com
Did you find this review helpful?yesno
»
Read the 11 user reviews on the Fender Highway One Telecaster [2002-2006] »