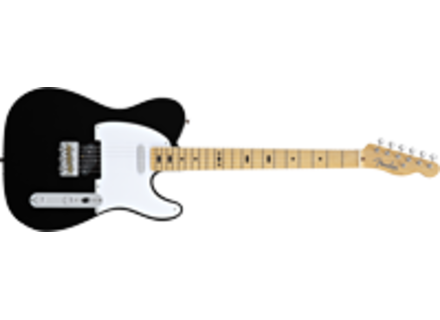 Fender Standard Telecaster [1990-2005]
5
I paid 350 new from a local dealer. I own a les paul custom and a fender mij strat and figured this would round it all out. I like twangy single coils also.

It's very affordable. The american ones are a little nicer but are close to a grand. The mex standard gives you all the tele feel for a good price. I like the bridge pickup. Its bright like a strat but has more meat, you get the best of both worlds. The middle position(using both pickups) is nice. It is kind smooth and twangy, better then the middle spots on a strat.

The neck pickup is a bit muddy when distorted. Sounds great clean though. If I were to play in a band I would consider replacing the pickup with a fatter sounding one. I've heard complaints about the frets being sharp on the edges but mine is fine.
The squire ones do have this problem.

Very good for the money. Alot of fun and a great contrast to a guitar with humbuckers.

Fender Standard Telecaster [1990-2005]
5
got it from sound control in newcastle paid £360 worth every penny. ive always wanted a telecaster and they dont make jazzmasters left handed

my god its wonderful, the paint (midnight wine) is just soo sexy if you get up close it looks mettalic. the neck feels like silk its so smooth and fast. tuners are really good and they have this little fender stamp on the back of each one its such a nice touch. even the action was ok i raised both the e strings a little but its better than i expected. i havent even got to the sound yet but hen again it is a fender telecaster what more do i need to say

hmmmmm i suppose its annoyiny only having one tone and one volume,when your changing pickups its nice to be able to have different volume and tone settings but ive got a vintage Sg copy (its brilliant i reccomend it as well) if i want to do that

its built like a tank its about three foot thick. when you look at it from the front the headstock looks dainty it really isnt i treat this guitar like a baby son but i know it could take some punishment. the best thing is though this ruggedness creates almost les paul like sustain and doesnt compromise comfort it is just awesome.

the guitar is phenomonal and so is the price

Fender Standard Telecaster [1990-2005]
5
I picked this up at Sam Ash. I had visited two or three weeks previously looking for a guitar in the 300-400 dollar range to move up from my cheap Strat copy. I liked the Tele sound, after all, they're very versatile. I knew that plenty of my favorite bands (the Wallflowers to the Clash, pretty wide range) used them and I wanted to see how one played. I narrowed it down to the Telecaster vs. an Epi Goth SG, but I knew that if I was ever in the mood for twange, the SG would not deliver in it so I picked up my $350 Telecaster.

I love almost everything. It was a floor model, the gorgeous Wine Red guitar I picked, so the dude at Sam Ash put new strings on it for me and set it up (and gave me a deal on the strap and bag). The action was perfect, low with little buzz (I'll get into that later). the look is great-honestly, it looks like a $950 guitar rather than $350. The tone is stellar-I'd read that the pickups were muddy, but I don't get that at all. It sounds great even through my cheap 10-watt amp. I can't wait until I get my Roland Bluescube to really compliment this thing.

hmm...it buzzed early on...I guess. See, the notches in the nut were cut small and I had the guitar salesman put on Skinny Top/Heavy Bottom's (I hate power chords, but I do love the fat bassy feel and sound of the low strings) so at first, the strings didn't sink all the way down and the man at the store put the action wicked low to compensate. but three days later, when they'd settled, it was going buzz-crazy. I freaked and thought I'd bought a lemon, but then I realized and fixed the action and all was better. There still is some buzz, but that's natural.

So I guess the only thing I disliked was how stupid I am...

This is a Tele here, so it's built like a tank. I haven't been too klutzy with the thing yet, I'm still in that mode where you first get the instrument and you treat it like it's pure gold and a week later it's on your bed covered with coke (the beverage...) and blood. anyway, well, the construction is good, seeing as it was made in Mexico...some things needed tightening, but hey, it's a floor model, and I have a screwdriver.

This is, without a doubt, a great value. It's got the tone and looks and build you usually get for much more, but it's only $350. The moral of the story is, if you're not a moron like me, and you like playing the guitar (other than heavy metal and this crap they're selling on MTV under the name of punk these days) this should suit you. It's a Telecaster, it can handle most styles of music. It may not sound like a million bucks, but it sounds like more than it goes for, and it's worth it.

Let's start off with the fact that I don't care where the Fender is made. Let's face it, a Fender isn't exactly the Space Shuttle and Leo wasn't building terribly complex units when he fired up in the early '50s. That said, I'm really impressed by the quality built into this standard tele. The neck feels and performs great, the quality of the purplish blue finish (it transforms depending on the light quality and type hitting it), the hardware is of more than adequate quality and I'm not inclined to upgrade the pickups (which is rare since I tend to "frankencaster" my Fenders since my first strat purchase from Guitar Center in 1977.

A great clean tone out of both pickups (I really like the tone of the center, combined setting) and it breaks up nicely through my Ampeg VT-60.

This one stays stock...I can't think of what to change! SWEET!

This review was originally published on http://www.musicgearreview.com
Did you find this review helpful?yesno
»
Read the 17 user reviews on the Fender Standard Telecaster [1990-2005] »