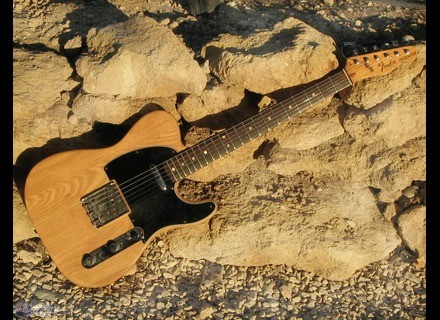 Telecaster (1977), TLC-Shaped Guitar from Fender in the Telecaster series.

Fender Telecaster (1977)
1
a hater of all fender and gibson. hookers thats all

i bought and sold these for 20+ years

nothing same quality as the cheap junk

it is crap all fender and peavey and gibson

buy something because you like it not because of the name

Fender Telecaster (1977)
5
I bought this guitar from American Musical Supply.

I paid between five and six hundred dollars.

I wanted a replacement Tele for the one that I foolishly sold two years ago.

The neck is outstanding!


I like the ash body. It's the perfect Telecaster for me.

I use it for rock and blues.

I suggest that you buy one of these!

Fender Telecaster (1977)
4
I purchase my guitar from a local secondhand dealer. The original asking price was $260 Aust dollars. After looking at the guitar over a number of months I managed to pick up the guitar for $160. I wasnt that interested at first but the thing grew on me and after a close inspection and noticing the serial number stamped on the back I thought it must be a good guitar.

The guitar is a telecaster shape, white in colour with a silver fleck through the paint job. Pickups are two single coil and one humbuck. One volume and one tone control and three metal selector switches giving a full range of options on pickup selection. The guitar is really well balanced and sits on my knee without tipping back of forward. The neck is a nice shape with a dark ebony finish and shark fin inlays. The whole guitar looks the goods.The sound is a full range from mellow jazz to hard rock. I play the Vester through an Ashto 80W amp and its great cannot wait to try a few effects like delay and chorus.

Nothing much really everytime I look and pick up the guitar it just feels great and comfortable I have had a Les Paul and Strat copy guitas but this leaves it for dead. Would like to purchase another one for my son so he can keep his hands off mine.

As above good quality construction however the Floyd Rose tremelo broke and I have replaced it with a strat copy which fitted really well and still looks the part. I needed to have the head repaired which was easy so after spending $450 all up I belive I have a very good quality guitar and would really want for any other

Yep look at buying one and give it a go I am amased that they are not sort after and not becoming a collectors item. It will never be up with a Fender but I can understand why Fender threatened legal action in the 80's as they are really good quality

It is a pretty good copy, 3 spring bridge, look-alike tuners, butterscotch, vintage neck. It has a good sound, better, I believe than my Mexican tele, maybe not as good (or maybe as good) as my Am. Strat with S.D. pickups. I liked the price, they usually go for 399.99 U.S. out of Mike's Music in Canada. Claims that the Japanese Tokai is great and the Korean stuff is crap may be partly justfied: I hope so, since the Japanese units come in at over $600.00 used. Still, for someone who wants the vintage look and superior sound, they might consider paying the extra $50.00 over a Mexican Tele.

The tuners are finicky, but the worst thing is the truss rodno adjustment at the head. And that idea you had about reaching it through the pick guard? Forget it, it ain't happening, gotta take the neck off, so it's hit or miss; luckily I hit it first try, and it set up low and nice.

I have a few guitars, Gibson Dove, Epiphone Dot 335 that has had all electrics and pickups and nut upgraded, a "Frankenstrat" Am. Fender with Seymour Duncans and one of the two lowest actions I've ever seen, the other being my Gibson SG with a melody maker neck and dimarzio/carvin pickup setup. I also I have a Mexican Tele, a Mexican Jazz and a Peavy bass, and so on, and they all play very sweet, so the Tokai will have to win my heart. Still it has very good sound and good action, although I'm not as traditonalist when it comes to the fat neck as I may have supposed. If nothing else, it is an eye catcher.

This review was originally published on http://www.musicgearreview.com
Did you find this review helpful?yesno
»
Read the 9 user reviews on the Fender Telecaster (1977) »