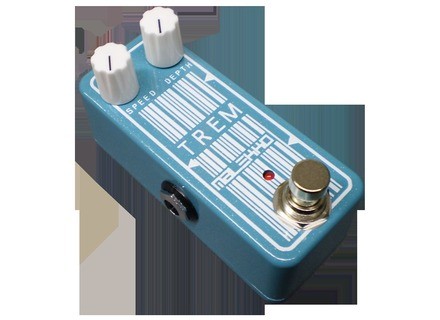 All user reviews for the Malekko Omicron Trem

Malekko Omicron Trem
3
This is a very affordable vibrato pedal that I recently tried for a few days. It has analog technology and only has the simple 1/4" input and output. There are no MIDI or Computer editing capabilities.

Malekko Omicron Trem
5
The Malekko Heavy Industry Trem is a super small tremolo pedal suitable for use with all electronic instruments but designed for electric guitar. The pedal is an analog one, consisting of 1/4" jacks for input and output and runs of a standard nine volt power supply. The pedal is definitely smaller than any pedal I've seen out there other than other pedals made by Malekko Heavy Industry.

There's not much at all to using the Malekko Heavy Industry Trem pedal. It only has two parameters for speed and depth, which is a pretty standard make up for tremolo pedals and are the same parameters you'll find on Fender amps for the same effect. The pedal probably isn't big enough to hold any more parameters anyway!

The Malekko Heavy Industry Trem definitely gives you that classic tremolo sound much like that found on vintage Fender amplifiers. You don't need to do much at all in order to get a good sound from the pedal, which is one of my favorite aspects of the pedal. You control it to get the sound you want from it rather than controlling it to get a good sound from it, if you know what I mean. I've used the pedal with a Fender Telecaster and I don't remember the amp, although it was obviously not a Fender since we were using a tremolo pedal.

While not the most versatile tremolo pedal out there, it really doesn't matter too much as the Malekko Heavy Industry Trem has a great overall sound. I also love how small this pedal is as it makes it easy to bring around if necessary. It's also the cheapest pedal in this line of pedals from Malekko Heavy Industry, at $100 US dollars. There are definitely cheaper and more versatile tremolo pedals out there, but this one has a great sound that is hard to beat, even if it's not a open to manipulation as others out there. I'd recommend checking out this pedal and the others in this super small line of pedals for sure!