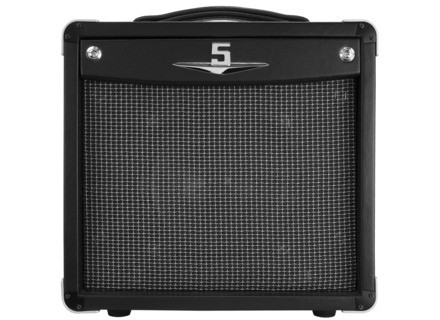 Crate V5
5
I played this tube amp with a Gibson LP BFG. I have subsequently added an attenuator P & P (-18 Db) pushed for the volume (overdrive = 3/4 volume) without getting angry with neighbors.

PS: I plugged Wampler Pinnacle Deluxe over my a wha, reverb and hall of fame. it allows me to get clean like Guns and hard rock heavy saturation incredible. But I give my opinion on the Crate V5 live in my Gibson without pedal.

- The config is very simple, exactly what I was looking for. 1 knob to adjust the volume (= volume / saturation), and the second button to the tone. So the manual is useless.

- I wanted to purchase an amp easy to use with its lamp. I was delighted with the sound of this amp even at low volume.

Tone button acts as he suggests, a lot of bass to 0, crystalline half, and the two bottom (?!). I put half because the overdrive is more accurate and rock.

The clean can be obtained from 0 to half volume. We start from a clean sound to a warm crunch. The overdrive appears from half the volume to end with a kind AC / DC three-quarter volume. Beyond this is a bit messy and frankly not useful.

- I love metal and rock. I wanted an amp to play mainly rock with overdrive pushing a little. It is perfect for what I wanted.

- As stated above, I give my opinion on the Crate live in my Gibson BFG.

- Volume 1/4 = clean sound rather flattering, can play just about anything. The rhythmic sound is only beginning to be felt, but already feature of the mark and the lamps will fit.

= Half volume the sound becomes crunchy and sounds good to kind of rhythmic Red Hot Chili. It can also attack the blues and old rock.

Volume to 3/4 = overdrive, I loved the grain and lamps that sound hellish for rock / heavy old school. Obviously if you expect a modern sound past your way. For the metal must be added distortion and it sounds good too. I played with Impaled Nazarene DOD FX86 Death Metal, and frankly I had fun!

- To return to the sound without pedals, despite the 5 watts sends maliciously wood, and I'm not in an apartment but not neighboring house attached. If like me you can not always play hard, you're limited to half the volume, and more. I added an attenuator P & P which allows me to play at high volume less than 18 decibels, which at this point allows the crate to be played in the same apartment until about half the volume, and bottom home .

Do not forget that this amp is tube, and it sounds so very much! The bottom amp in front of you, you become deaf in a few minutes.

- I tried a lot of models but little lamps (JCM 900). on the other hand I could compare the Crate V5 Bugera V5 and at the same time with the same guitar. I was at the bottom left for the Bugera but tuned the crate without pushing the volume I had a real favorite.

- Advantages: clean warm sound, sound rock / heavy old school 3/4 volume, simple settings, the build quality despite the "Made in China", the sound of the lamps.

Cons: Some regret the lack of reverb, I do not. Attenuator should be provided as buying a 5 Watts to play at home in general and not to have problems with neighbors or destroy the ear.