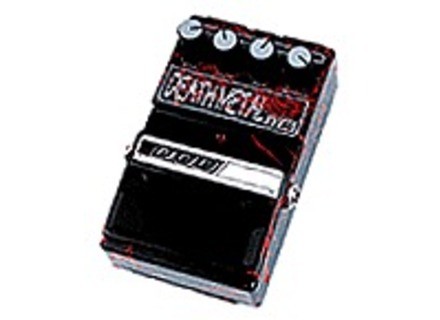 DOD released the FX86 Death Metal by early 1994, probably at the same time as the FX33 Buzz Box. Designed for use with guitar or bass, the FX86 was painted solid black with a blood-red splatter finish befitting its name. The FX86 was unique among DOD's distortion pedals in that it featured three bands of eq but no distortion gain control, resulting in a somewhat limited pallette of distorted sounds (but perfect for extreme metal). DOD's self-imposed limit of four control knobs became readily apparent with the FX86, and made it clear that no DOD pedal would ever feature concentric pots (which Boss began using in three different pedals released in 1991, including their MT-2 Metal Zone). The FX86 Death Metal sold well but was ultimately replaced by the final-series FX86B Death Metal Distortion in 1998.

gg.2705's review (This content has been automatically translated from French)" For extreme saturation"

Powered by 9V battery or adapter jack on 1.5

Easy setup, turn the knobs and we are looking ...

Many possibilities with this (the distortion contained in the ultra-distortion, through a fuzz with infinite sustain) to a still very aggressive and dirty with his shrill treble ...

I've read that the switch was fragile, I personally have never had to worry that side.

Cons:
- Alas unmanageable when pushing the amp volume (feedback and breath + +)
- Is not true bypass: generates a constant hiss when not activated

At the time, it corresponded exactly to what I wanted (discovery of saturated sounds).

I recently sold because I was using more (too typical metal), however in its class, it remains interesting to discover.

We can no longer use simple
Manual? ..

The knobs are effective throughout their rotations, there may be enormously low, enormously of medium, of acute enormously.
The grain of the pedal is ultra ultra ultra ultra tight.
The gain is not parameterizable, causing a big breath and especially a feedback absolutely monstrous and totally uncontrollable if you turn up the volume of the amp.
With this pedal, it is not on repeat, just to be playing on the couch, taking care to cut the volume of the guitar that you do not scratch.
That said the sound is very old school, a very tight grain, very powerful, with dominant acute cradasse a little but pleasant, a good attack and it's very aggressive.

It should definitely s fix by adding a small component here and the ..

I have for almost 10 years, the model with splashes of blood.
I love its sound very aggressive ultra sharp knobs its very effective, but I hate those damn uncontrollable feedback.

Very tight grain and very particular not suit everyone aa.

I adore but do rarely uses because of its feedback and other noise tiring.

She deserves all the same to be modder.
Did you find this review helpful?yesno
»

total's review (This content has been automatically translated from French)

Very easy to use. When the battery is installed, you plug it and play!

A very big distortion not to put all hands.
Very difficult to adjust at first, but then what happiness. For me it's the best guitar distortion that exists.

We can do any type of metal either thrash, death, black, doom, grind, etc. ...
Generally found the sound we are looking fairly easily once it was well in hand.

The bass are quite interesting and powerful mediums but also the highs are a bit garish and difficult to master (this may be why they called them scream ...). But once well balanced with the rest of the big ca sends power!

It's been almost 10 years that I use and I'm really not disappointed with the sound. I used it with lots of different power amps (100W to the 2W through 10W and 30W's) and she never fails.
The ideal is to use a 100W amp driven between 50% and 80%, that of the great powers that it delivers a big sound.

I use a Peavey Bandit 112 and frankly it gives me satisfaction.

I use it for a good ten years and I get hooked. I never tire yet.

The advantage is that it is intended for metal and it provides both the metal very fast and violent as in the slow and heavy metal.

The small disadvantage is the Treble EQ is a bit difficult to master at first.
There is also another problem (but is generally on the pedals Dod) that resides in the switch of the pedals. not very strong, I did it repaired once before edging change by a large push button switch as well purchased a robust electronics stores. And since then, no worries.

I remake this choice if it still exists. Alas, this model is no longer and was replaced by a model similar to Digitech (but who looks a little less awesome). Indeed I hope that this new model incorporates the same features as the Dod.

DOD FX86 Death Metal
2
As its name suggests, this is a distortion pedal metal type, the look is nice, you know what you are dealing and the machine is particularly strong.
An input, output, and four potentiometer via battery or AC power supply, classic ...

The information on the pots are a bit surprising (rip, guts, bread and scream), after handling it Consat they can modify respectively the volume, bass, mids and treble like most distortion pedals.

The look and announces the name the color, do not expect the finesse with this pedal, the distos it generates are actually very aggressive (too?), A noise gate is needed to fight against the breath very intrusive.
The setting is less obvious than it seems, especially the treble is quite unpleasant and are quick to transform sound into a sizzling infamous.
I tried various settings with my Cort X2 15W marshall amp and without getting something usable, in absolute terms it is possible to play with the metal but it is clearly not the nirvana ... more than many pedals similar and much more interesting have appeared since.

I use it for two years but I finally put it aside in favor of a Jekyll and Hyde from Visual Sound.
The sound of the Death Metal FX is certainly very far but it should be able to master it, really dirty and too rough for my taste, I really recommend.