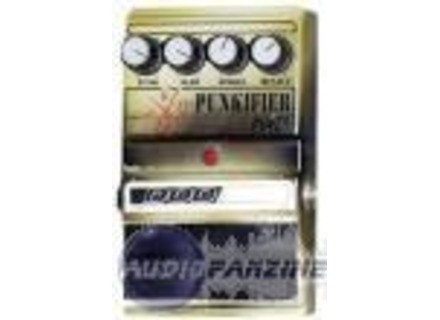 Introduced at the 1995 Summer NAMM show, the DOD FX76 Punkifier offered a range of distortion sounds from overdrive to fuzz, or a combination thereof. While the FX76 was marketed at a punk rock audience, it is probably most associated with Blur guitarist Graham Coxon, who used the Punkifier along with a ProCo Rat on the albums Blur (1997) and 13 (1998). Although it could provide a variety of distorted sounds, the FX76 Punkifier did not sell nearly as well as its peers (such as the FX69 and FX86), and it was discontinued by late 1997.

This is an overdrive-type distortion rather extreme in the genre. Like most of the saturation, the electronics are analog.
Like all DOD: metal frame. Like all DOD, the connection is bad enough in terms of power supply (mini-jack on the left, just above the output jack).

Otherwise: IN / OUT, nothing very disturbing. A red LED indicates the switching of the effect.
Also runs on 9v battery, with the eternal danger of losing the plug of the battery compartment (frankly, with this series of pedals, they were not the best, in DOD, PSU issue)

The settings are incomprehensible:
- Punk
- Slam
- SPIKE
- Threat
I admit that not having owned the record did not help me!

In short, these buttons act quite significantly on the sound, although it always remains in the same vein saturation crazy.

The effect is effective: it saturates until it could be assumed to be the limits of saturation!

The name, he is very subjective, since my ears, punk sounds great with an over-drive and a jazz guitar. I play it with electric guitars.

For cons, I highly recommend the noisistes! Here, it is enough to make things interesting. When I tried to say that it saturates "so" or "to the limits" is to say that it's just the same effect as when you put two or three distortion pedals in series. The accumulated gains and it gives a kind of soup rather unique sound.

However, the frequencies given by the bizarre setting button "punk" does not promote gambling agreements. It's more a draft. I would say it is better to play a kind of riff, or maybe noisy solos.

I have this pedal for several years, but I admit to being a bit hard to part with it (though it will one day, for the amount that accumulates in the corners).

So I come away from time to time to experiment with sounds and trash psycho-punk (with flanger and phaser!), But I have never built a piece. One day who knows.

So: bought for pleasure and fun. What I do without a second thought.
For the price that I got it (fifty euros), I do not regret. I allow myself the time to shop around. As long as I have a soft spot in my studio (housing, no registration!)
Did you find this review helpful?yesno
»