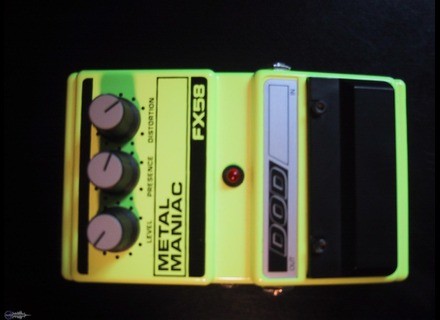 DOD introduced the FX58 Metal Maniac with three other distortion pedals (FX52, FX53, FX59) in early 1990, although serial number data imply the first few pedals were built at the end of 1989. With the same circuitboard as the soon-to-be discontinued FX56 American Metal, the FX58 Metal Maniac used slightly different component values and appears to have been voiced for a "classic" heavy metal distortion sound. While we doubt members of Iron Maiden ever used this pedal, the FX58 might be worth checking out if you like NWOBHM-era metal distortion tones. With its bright yellow paint job, the FX58 probably stood out at music stores, but its visibility did not seem to translate to increased sales. Based on serial number data, production of the FX58 was probably discontinued in 1993, although we have seen one FX58 whose serial number implied a build date of January 1994.

christofair's review (This content has been automatically translated from French)

DOD FX58 Metal Maniac
5
This is a guitar effects pedal, which offers a single effect: the distortion. Pedal analog transistors: it means and it's good.
Input and output jack and a footswitch quality in DOD. It eats batteries 9v course, but there's a minijack input for a dc external power supply.

As on most distos, turn the knobs for gain, tone and output volume to sculpt the sound. Very easy to use. Bought new with the manual, it spoke only of chaining possible with other pedals but not the settings themselves understood ... it's simple to do his little sound distortion at home. Very easy to adjust.
Mention A + (20 of 20) for the footswitch which is silent in all weather, and as new after 14 years of use.

Special attention to pedal!
The distortion that comes out of this pedal is super effective! but I will not say realistic, knowing that many of the scratch looking for "tube" "vintage" "warm" etc ... But it is one of the powerful distos I know: it breaks everything in its path.
I use it primarily an electric guitar, and while it sounds on the humbuckers, it is especially simple micro-coils (with more acute and more attack then) you get a very destroy its . Sometimes I get a Hammond organ or synthesizer in basic: ca does too.
Overall I compare the sound of the Metal Maniac to that of a mill in full operation. Probably due to the "fuzz" in the upper midrange on each note. It's quite a fuzz, and it does on the powerchords, and it is more distinctive (we like it or not) of arpeggios or solo.
My favorite sound with this pedal: a wah-wah to before, with the pedal on and "max" (after the "wwwouaa"), and enters the Metal Maniac with an excess of treble. Huge!
Pedal designed to make the grunge of the Indus, the goth! and why not a big yucky riff in the middle of a tube.

I have since 1992 and I keep it warm. When I bought it, the salesman told me I was one of the only scratch to buy it. Apparently, a distortion too original, too conventional. It's funny, most people who have taken was to saturate a harmonica.
I collect distortion pedals and I use them all regularly, and it's one of my favorites. I do not know the equivalent of pedals ... it is similar to Boss Metal Zone but also messy.
Yes I do it again the same choice if it again. Then it was cheap at the time about 500FF.

DOD FX58 Metal Maniac
4
Very simple ... as usual ...
The only particularity is that we are not dealing with a tone but a button prsence!
Neon yellow, such a distortion pedals dlivre.
In terms of the product and its prsentation practicable only ask for?

The pedals, as the name suggests, is a distortion. Look no overdrive or other is dead!

The gain knob only affects the compression and the addition of harmonic. It adds that little gain trs. But y 'is so dj! It's hard now!

The knob of prsence gives the overall color of "Trs big rock" a "fuzzy".

The volume has a mind-blowing dynamic pedals that has a standard output level. The more one grows the more her body is. He won in mdium and sounds more "clean", "carrquot;.

A distortion that convinced me by his characters and his efficiency that trs trs drstique it sounds good and allows a receiver to have a big sound. It does not sound like a sound fashion, "front" but instead it has a trs its staff.

This pedal if you want a demonte his country, it gives its full potential in large disto!

Caratre enough to make the basic sound but demand be tamed.