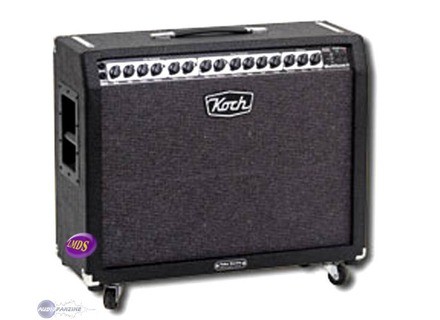 Koch Multitone II 100
4
This amp is the same amp as the 50 watt version but just doubled the power. In this amp you get 100 watts of power. You have all the same tone and features as the 50 but just a little more headroom. The tone will slightly be different because you double the power so you will get some extra headroom in the tone.

This amp features Solo/Rhythm facility, Switchable Speaker Damping, Classic long-scale Accutronics Reverb. This is a tone monster amp and the big brother to the multi channel twintone amps. These are a little big more featured as far as versatility and options. There is a lot more this amp can do over the twintone.

This amp gets a little more headroom in the tone than the 50 watts. Also the 50 will feel a little more spongy in the low end because of the lower wattage.

Fantastic from front to back top to bottom. This is a three channel amp one dedicate to clean and one for the distortion. What is different to this amp is that it has a middle EQ for the clean channel. Most amps I come across and especially Fender has only volume, bass, and treble. There usually isn't a middle control knob for the clean. That is a simple but great features to have. So this makes the clean ton of this amp much more versatile to your guitar's needs and playing style.

The distortion is much more heavy that the twintone. I like and prefer the voicing of this amp over the smaller brother twintone. This one steps outside of the confines of the blues style amps and gets more in the rock arena.

At new these amps come in at around $2800, at least that is the lowest I have found which is lower than I could find the 50 watt version. which is a big kick to the groin. That is a hefty price for an amp like this. I don;t feel that it constitutes that kind of price point not matter how well these things are built. I wouldn't recommend for that kind of money. If I were going to spend that I would get a Bogner for that price and be able to service it a lot easier if anything should ever happen to it.
Did you find this review helpful?yesno
»

Koch Multitone II 100
5
amplification and preamp: all lamps. Lamps amplification stage are EL 34 siemens NOS (New Old Stock armies of the east) ie the rolls lamps, some even compare to the famous Mullard. I have two lamps retube amplification last week and so I contacted the dealer who confirmed that these lamps were admittedly a bit expensive (170 pair) but the manufacturer took the option to in his amps ultra efficient lamps from the outset to achieve very good sound from purchase, proof of the attention given to the manufacture of these amps (same for the rest of the components!)
But the mindset Koch does not stop there, the wiring lamps allows to change lamps in pairs and so do not have to change all four lights at once (to avoid having to expensive at a retube). The bias are intended to be set in pairs.

connection: an incredible range of possibilities and connections that work! Personally, I love the ability to put effects loops in series AND parallel (reverbs, delays ...). It has a direct output with speaker simulation for recording or to enter a console live without cutting HP: Royal and without distorting the sound of the amp.
Ability to add HP (but 50 or 100W lamps I do not use it)
A super comfortable detail: two inputs for single coil or humbucker for (dig a little mediums): ideal for those who have a favorite strat, gibson a shot and as for the rest, it works really well!
Reverb (accutronic spring) is very respectable and it is easily disconnectable (RCA) for those who like me insert a unit of effect.

Power output: 50W and 100W in triode and pentode with a switch on the rear panel. I used 50W sound suits me better (roots) but tests 100W is equally compelling for a slightly more modern game. Anyway, the sound is great in both cases. (See "Tones")

settings: a highly effective and very fine equations per channel (clean / crunch and saturated), see chapter "sounds". A volume control for each channel and separate drive. A mix knob reverb or effects loop very end, a speaker damping three positions according to the places where we play and the icing on the cake, two volumes of output (rhythm or solo) switchable by footswitch. complete and ultra comfort!
Each channel is selectable by footswitch (5 switches), which also provides the ability to cut or reverb (or effect loops) + selection of rhythm or solo volume. The pedal is super tough with a cable about five or six meters.

Configuration very simple and complete: everything is accessible.
Manual: very simple and sufficient: it is the end of this manual are examples of settings for different sounds very informative.
Obtaining her: one branch and it sounds! For the purists, we can refine its settings easily and without spending hours.

musical styles: wide spectrum of sounds. May not necessarily be suited to the hard core but it is not his vocation. Against by the aptly named "chameleon" provides a multitude of sounds from its settings and its possibilities.

Types of sounds Achieved: équas are very effective on both channels, you can spend a very round jazz big sound heavy on the saturated through crystal clear sounds funcky to wish or greasy crunch for blues. This amp is a factory sounds good!
Systematically attack the top, the receiver reacts perfectly to the nuances, the sound of each guitar is guaranteed. A fun game at every moment, bossa novas on fingers or large, heavy riffs.

Guitars used: U.S. strat pickups with van zandt, gibson nighthawk, Ibanez S series with microphones dimarzzio. Each is followed by mutitone, it is possible to play almost all styles ...

Other models tested: when buying, I wanted to point me to the mesa boogie. They lack the typical versatility multitone II and especially the price / quality ratio is not the same. In any case, it largely supports comparison and leaves the head at a lower price.

It is obvious that I would do this choice after almost six years in the company of this amp. the quality is impeccable, everything is mounted by hand in Holland, again, versatility is outstanding and the sound is excellent for a budget after all affordable.
pity they do produce more!
The only downside is its weight micro (40kg. ..) but this is not a bass amp either

10/10 for all, without hesitation but it is only subjective!

Dad as my mom with her best friend and the factor ... everything exept the scatogore opportunities for the metalfisting a small od as a lubricant will be welcome ....

I tried with thirty skyscraper (I work in retail zik, it helps), even the most rotten person, even the appliances (note anyway to surrremplification) folk and classical ...

the effects loop parallel printer OR series are clear, bb for integrated reverb that comes too engaged in the equalization of the sound ...

THE great kif .... for rehearsals and concerts is the splayfooted, performance is excellent ... it is so accurate that I had to learn the guitar!

I made a very good case, the announcement remained 4h af, I asked my day, jumped in my car and 200 terminals and a few more hours I enjoyed tards, and since has consistently receives ...

ekerisann's review (This content has been automatically translated from French)

A truly ultra-amp complete! 9 for the weight ... Even if the three grips help!

2 channel spars well:
Pre Channel which is the clean channel spar in half with 3-band EQ control over the drive to "crunch" the amp section and a second drive that allows channel more saturated ...
Post Channel, so the game 4-band equalization with disto ...
Each volume has a ddi and Bright and Mid knobs to dig the equalization ...
Simple because the front panel is clear and not too loaded easily obtained what we seek ...

The clean channel sending a warm sound, the crunch is full of power, trs good dynamics, versatility is there!
For the part of distortion is obtained Faicel distos lgres like big fat saturation mtal all is well feel the lights and the Speaker Damping allows the accentuation of the overall sound to the treble mids or bass allows you to play everything on this amp!

I test for several hours at a friend who made his amp "home" and I admit I t fully satisfied, you can play everything and especially with quality because too often the versatility amne sound way everywhere, not everything is good, at the same time we are in the high-end brands, but deal with this combo Dutch s'ne out great, it does not pay for the brand, just the quality it is the price but the MRIT!