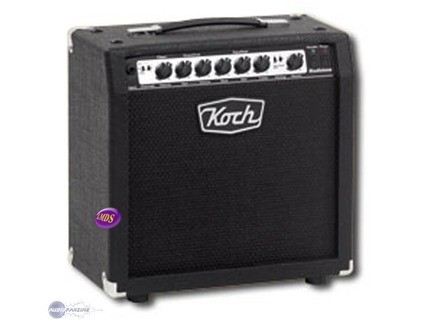 Koch Studiotone II
5
- What kind of amplification (lamp, transistor ,...)? any lamp see descriptions above
Power: 20 W of good quality and sufficient in bar rooms, most taken up by a microphone if necessary
Connections: everything I need
effects: one qualisation for 2 channels. Finally, since this is not your exact Gnant is equivalent, good DEFINITIONS of high and low in saturated and clear. reverb not bad at all

Configuration: made equalization can choose the + or - which gives bright treble without being garish. We can rgler the Difference "volume" between the OD and OD +, which is not the case on the Marshall DSL 401 I have. This is very practical
Well its no problem, half an hour and I found rglage sounds of the head JCM 800 Lead Series (2 channels) and I was missing on the DSL 401 (jcm 2000, its too saturax my taste and not enough gain progressive, it&#39;s hard to find a crunch sound, passes away in a saturated mtal, so sounds more "modern"
English manual. Useful to know that we can connect both HP (8 ohms, or other internal
The sound for me 10 wins, Manual 6 / 10, configuration 10 (a simple and effective means)

should have what I do, I need a clear and sound saturated (OD + OD passage just adds more potato without changing the sound, it&#39;s rare)
Essay with Strato imitation with Van Zandt pickups, funk (micro sleeve and center) found its colors. A half body Ibanez AFS 95 T, jazz or rock sound without problem / tl a Mexican reissue 60 &#39;with micro tl fender also find it fun sounds slammin or sweet, or crunch in OD / a epiphone flying V with 2 Seymour Duncan pickups. Apart from the stratum that sounds great, it is true that others are "nice little guitar" but they all found their particular sound (which is that I have a very DIFFERENT MODELS, below range with a change of pickups, and I believe it is not afraid to be a scratch chourrer 2000 in accessories o There&#39;s not always that friendly people ...), what does unclear how the jcm 2000 dsl 401 which gives a consistent regardless of the scratches.

Used for a month, house, repeated, concerts and shows (where the sound must be clear and distortion Submitted despite a low volume) is versatile
For cons I prcise one thing I think is important: used with its internal speaker is already great, but is a combo of 20 W. And a combo with a single HP plans to limit the sound but it (also a combo of 50 W is the same). The clear sound of Studiotone has its limits, after a crunch, from half the volume and on the guitar (double or single coil) but when you do not want to lug around a box in addition it practice (small bars of 4 m by 3 associations and other rooms).
But it is the top box with my marshall 4 X 1960 12p in 16 ohms. s to send, even with only 20 W. The clean is clearer, the dtails stand out in clear, DO, or OD +. Sr is less capable than the ears (I have an ear "frieze" of about 90 db certain frequencies and has allowed me to find a loud but not loud (too much music high may be ?...)
rock concert but I prfre m&#39;embter lugging my box to get really sound like.
Other essays amps: marshall jcm 800 head SERIES lead but I love problem of service (not always reliable in concert ...) but I like her, unlike the jcm 2000 dsl 401, I got too mtal typ. Laney nice but not my sound. A mesa boogie and even fun but rcent problem: too quick profit. A fender hot rod, clear sound too loud I got a Hugh kettner not too bad in the room but lacks body on scne (like when costs a Marshall Valvestate that sounds not so bad (report quality price) in a small pice, but it is clear scne the diffrence with a dsl 401 and a Valvestate and it&#39;s not complicated: a JCM 2000 and JCM 800 - 7 = a Valvestate lamps diff ence. It&#39;s true that I am a big fan of the whole lamp, since I pass There&#39;s about 20 years, a Carlsbro Rebel 8 transistor a fender performer 1000 a marshall JCM 800 Lead Series . It&#39;s not for show. Obviously, I know it&#39;s not the same price.
j&#39;hsitais between Studiotone just the head or the combo, but for a little more There&#39;s the hp when you&#39;re lazy. and sends all the same when you plug in a box.
the 50 W Twintone seemed nice especially for the double but finally Studiotone equalization is very well balance between its two channels and me. the 50 W do not attract me more than knowing that I had never Exceeds the 1 / 3 the marshall 100 watt lead series and half of the volume on 401 dsl. In del is a big mush inaudible.
In conclusion: a been a while since I had not heard such a beautiful sound, balance, round or crunch or OD (not direct saturax ...). Versatile, simple (no fx of shit amp simulators and other ...). I use it with just a basic wha jimi hendrix (rcente not Teribe &#39;Terribas&#39; too much boost from the old I had and I prfrais but is dead ...). APRS concerts, there&#39;s often scratch passing to discuss stuff and makes me happy to hear that the sound is blind rock and potatoes, a good balance, one roundness easily g stocky, and it&#39;s not the 20 W or 100W changing anything.
a really great sound: the equation that kills an amp + a = a skyscraper send!
No pedalier who "ridicules" the sound. Just the body and the spirit of rock&#39;n&#39;roll! Ah! Ah, Ah
I must say that I record also groups of "youngsters" for demos (I have 43 years of music with 25 concerts and 20) and that I will well srs concerts (There are so many "small groups" as nice as large in places that the show dfendent and culture honntes prices (not 20 instead ...) and it&#39;s true they do not " THE "sound. Sure, it&#39;s a budget (I), but must know what you are looking for. I am neither Satriani or Stevie Ray Vaughan, but I&#39;m doing not so bad, and with sound in addition, is doing well.
Well, this small dose of APRS ointment (I love c&#39;que j&#39;fais ...)
Good amp, not that expensive, go see all the reviews on the Studiotone or the head only, it is the bttn.

APRS add 4 shows in a room that rsons much. there is a switch to mute the hp safe for the amplifier and an output "record" in non symtrique jack. is entered directly into a mixing desk and it shows in faade and returns. Sound surprising trs near the sound of the amp, and you can rgler volumes and saturations as if we were playing "Mormal" with HP. B Well the sound is not full of rotten as output lines on ampli.C is a kind of accumulation of HP. One can even choose whether the micro "virtual" is centered or not, and choose between a box and hp 4 hp (Muls so). And soon to add more "noise" on scne keeping crunch and saturation without having to turn down the volume

Listen to the 6 audio files about Koch Studiotone II »