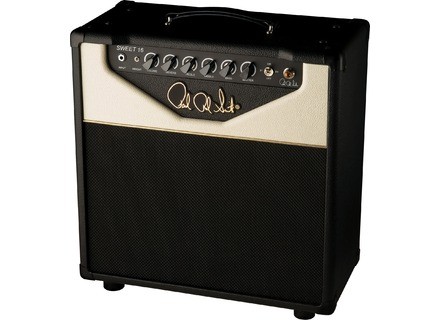 PRS Sweet 16 Combo
4
There are a few things that separate the Super 16 from the 30 amp from PRS. ONe is that the wattage is cut in half to 15 watts. The second is that the speaker is a Celestion speaker rather than a Warehouse Guitar Speaker. That one is a huge let down for me because Celestions have gone down hill as of lately and the Warehouse Speakers are now one of the best made American speaker out in the market today. Everything else is pretty much the same as the 30.

This amp is just ringing the tone. This amp has a sustain to it that just sounds phenomenal! The tone is a very pop or country type tone. I don't find that PRS guitar are necessarily country guitars and it seems more metal or hard rock guys use the guitars a lot. However, the majority of the amps that PRS makes seems to lend themselves to the country and mild pop type music.

I am wondering why the PRS amp have those ugly Budda control knobs on them. I hate the look of those knobs. They just have a look to them that is very unappealing. But back to the sound of this amp.

The tone of this amp is extremely warm and rich. It sounds amazing with a PRS guitar. I am not really a fan of those guitars and I have played probably about 20+ and never found one that fit my hand just right. The tone has a full bodied tone that sustain very easily. Not to mention that the amp takes pedals such as overdrives or boost pedals extremely well.

At new these amps come in at around $2000, which is a lot of money for an amp with this little of features. YOu have one boost switch and one channel and that is about it. You don't even have a presence control knob. SO this amp is a bit too high for what you get. If you need a great sounding single channel amp that will do about the same as far as tone then I would look into the Blackstar stuff or even a classic old Fender Deluxe amp.

I would recommend this amp to anyone who likes country and and is partial to PRS guitars and other products. Other than that this amp is overpriced and under performing for that price.
Did you find this review helpful?yesno
»