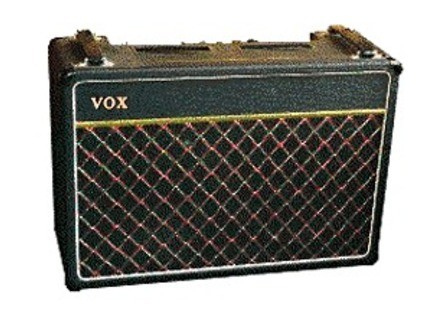 Vox V15
4
I paid £75 in 1986 for this. The unit was secondhand. I saw an ad in a local paper that said "Vox valve amp for sale £75 ono." I snapped it up immediately. The V15 was kind of half an AC30 - intended for practicerather than gigs. Being all valve (all tube to USA readers)it was a bargain. At the time other valve amps were going for hundreds.

Smooth mellow tone - quite loud (considering it is only 15W RMS, 21W peak) When overdriven it gives a very smooth distortion suited to rock. When played with distortion and a wah-wah it is great.
It says "Made in England" on the back - sadly not many things are these days so it's a bit of heritage.

To get the best sounds it had to be played at full volume. This results in very good sounds but angry neighbours. The lack of a headphone socket makes this amp OK for practice in a sound-proofed room or when there was no-one in next door. At low volumes the sound was mediocre and this is a bit frustrating.
A couple of times I have managed to pick up stray radio signals with the amp as well - Radio Moscow and BBC Radio 1 feature on some of my 1980s home recordings. It used to happen to Hendrix too so at least I'm in good company!

Construction-wise the amp is quite solid. The overall quality of the cabinet is very good, with hard-wearing tolex material and a traditional looking Vox speaker cloth. My only gripe is the plywood panel across the back immediately behind the speakers. This vibrated and made an annoying buzzing sound. A couple of extra screws sorted this out. The Vox badge on the front grille came off very soon after buying the unit - it is cheap plastic, metal would have been better.
The electronics are a little weird. Occasional radio interference - this has happened rarely but I can't seem to cure it. Also, the smoothing capacitor blew once and had to be replaced. This took a long time to fix as the repair shop couldn't get a circuit diagram from Vox for a while. In the end it cost me £45 - could have been worse I suppose. There is a schematic available on the web now so this shouldn't be a problem in future.
I have replaced the valves a few times - but you'd expect this anyway.
The speakers are fine and take a good battering without any problems. The presence of reverb would be very welcome - but for £75 I can't complain.

Vox make some very expensive kit -but this amp shouldn't be seen as anything more than a practice unit. Electronically it is very basic, but it performs well.

If you see one for sale (and it works properly) pay up to £120 for it and entertain the neighbours.

It vox: the sound is typical. That's it.

I bought it on occasion two years ago. No regrets. I would not change for an AC30.

makorewood's review (This content has been automatically translated from French)

Vox V15
4
Interesting for both inputs in a small room with a microphone for voice input in the "brilliant".
good power "15 watt lamps = 35 watts of an amp haujourd'hui"

Many harmonics and richness in the sound

We must move closer to the A 15 C but much cheaper, and for how long?

Vox V15
5
15 watts all tube, in summary, with volume, gain, treble, mid, bass, normal input and a second "brilliant". No effects. Personally, I replaced the original HP by celestion vintage, two 10 inches.
A little reverb would have been appreciated, but this amp was designed in the late 70's specifically for the studio for shooting raw unadorned, and finally it's small print, it's small, lightweight, simple, but to a formidable power for its size and clarity magnificent.
One of his best quality is that it can be used at a high level of performance to enjoy the lights because it is not overpowering, but I've never played the way (I just tried to hear, but it tickled the ear drum ...)

No manual, it goes without saying ...
The config of the amp itself is irreducible (as described above).
When the sound ... Yes we get a warm and Brilland even crystalline. After all depends on the pedals, guitar and the game persona I used it with a first group (andy's car crash) which I used many effects: it was perfect for all rants sound, he spat wonderfully the engine sounds on the guitar pickups, the game sounded like a bow string of Arvo Part, and the big sound he gave a lot of height. But ultimately it was the sound bright or just a delay and abrasion of its lamps, which gave the most effective (in fact today I tend to play more sober, less effective and more lights with the group timecode)
After, well ... I finally burn out both HP original strength to send frequencies not possible, and it must be said that he can not make any sound (must say I sent him samples infrabass of ultra high). This is a vox, not a Marshall or Engl. It will hardly make him out sludge and hardcore sounds ... But it remains flexible over a wide range of sounds air, psyches, and we can make a good experimental tool ...

For me it is great, but because I took the time to tame.
In records from the experimental post rock he gives beautiful textures, rich, hot, abrasive and crystalline ... It is very dynamic, we just play like a real instrument, because he lives! It vibrates. The feedback can be very mild or very aggressive ... A beautiful sustain home.
I play regularly with a Les Paul guitar and an old Roland (double with two windings and a sensor noon origin!). On the latter, there is to ring the vox, a large easel to scrape the strings and getting small sharp sounds that the amp "likes" a vibrato sound ... And as said above, I spent bcp effects in its circuit, and he loves it (delay, verb, dist, od, filters, EQ, Pitch, Tremolo, comp, flange, etc.)

I use it for ten years. I used many crap (which often prove interesting after all for some uses) and other wonders, among the most beautiful, Fender Twin Reverb, Orange, Marshall "artist", engl, etc.
I sometimes thought of infidelity, but every time when I reconnect, I fall in love. I tested the recent series of vox that I found rather lacking souls. I think one day I will buy a twin reverb, but I always keep my V15. The ratio Q / P was good when I bought it, but now I do not know if I was still at € 300 / 400?
The least ... maybe its lack of trunk if you want to do heavy ... and again, he may be out of power. Say it has a color and it's a quality that will be good or bad depending on the user. For me it's done ...
Pros: the quality of sound. Its weight and size for such a use of sound.
Ah, if there is a negative point, it is a bit fragile. It's an old man, or rather an old lady, because it rather feminine.
I would do the same choice, for better or for worse. Amen.