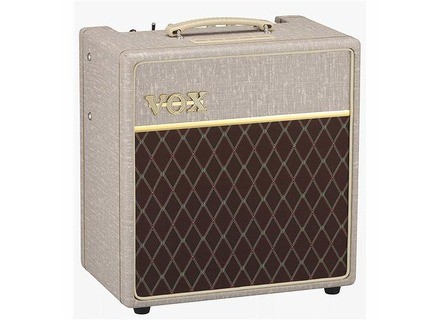 View all offers for Vox AC4HW1 »

After several decades of research amp capable of doing everything, and ultimately do nothing really well, it comes back to what seemed obvious in the 1960s: when you need to play the electric guitar at low volume, need a small amp. In any case in terms of the amplification tube.
The AC4HW1 is both simple and flexible. It plugs into the corresponding output level of the guitar input, it sets the gain, it plays on the two-band active EQ (bass down increases the mids ...) to sculpt a sonic palette fairly extensive, then adjusts the volume to the room. 4 watts are almost too loud for home use. Personally, I play with the volume halfway.

This edition is a reprint of the historic AC4. the AC4HW1 is a smaller version of the Top Boost channel, created in 1963, became characteristic of the AC 30. The controls work the same. The resulting sound is rich, dynamic and pealing. The great interest is that the construction "handwired" outputs its remarkable purity. I owned a Vox AC30CC2X and AC15Heritage with Top Boost. This version is simply the best I've heard to date. With a Telecaster, the sound goes from light distortion typical rock sixties / seventies. The attack is clear, the articulation is better, the more singing tone, without acidity. The dynamic is amazing for such a small amp. HP Greenback 12 "is at ease in the cabinet birch that accentuates the dispersion of high frequencies. Pedals go wonderfully. I especially recommend the clean boost and treble boost to naturally twist and pull his best lamps up later in the distortion. Another possibility. switch the switch in Hot Fashion The EQ section is then bypassed and the signal is boosted, delivering a more saturated and more blunt attacks its there then the Brian May. in this little Vox.
Note: If a replica of the historic AC4, equipped with its Tremolo channel from 1961 to 1962 on research, we must look to the JMI-4, another very successful niche in the beautiful small amps.

A beautiful amp with its coating Tolex "Fawn" worthy 1960s, compact but not ridiculous size, the legendary sound. Far from being simply a practice amp, it is also a serious amp studio or concert it is transplanted. However, this is not a very good rehearsal amp with a rock band: 4 watts fail to be comfortable with a drummer and bassist. However, if the price is high, we offer a beautiful piece of craftsmanship and above all, a very inspiring amp.

26 of 27 people found this review helpful