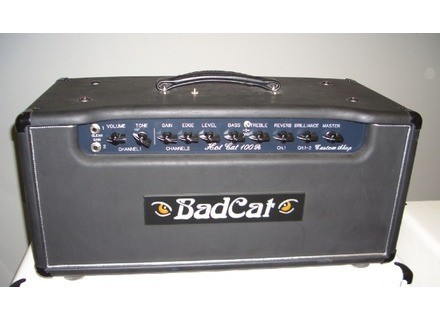 This is basically the same as the normal 100 version, but you have more options. The most obvious in the name is the addition of reverb. This is footswitchable with an extra on button generic footswitch. You also get a five way EQ knob for the clean channel, a la the Black Cat EF86 channel. In addition, the gain channel gets a little bit more EQing possibilities with the addition of a three way Midrange switch, which scoops the mids, adds mids, or leaves the original mid voicing intact. There is also a tube buffered FX loop.

The clean channel still has the bright Vox tone. The EQ knob doesn’t do much to change that, it mostly just slight steps up the low end frequencies. You still have the shared Brilliance knob. The reverb, that works on the clean channel only, is not the lushest or most silent reverb ever, but it's adequate.
The high gain channel is left mostly intact, with the exception of the Midrange switch. I can see where this switch can be helpful, but I always preferred the flat mid voicing.

The channel switching is nice, however I'd still prefer to use the AB box just to be able to run different pedals to the clean channel to boost it or EQ it a little. It does help in quieting down the noise bleed through from the gain channel, however.

I cannot speak to the quality of the FX loop since I've never used it. I had heard mixed reviews, however.

Obviously people had suggestions (or complaints) about the original Hot Cat amps and Bad Cat tried to address them. This is done with limited success. For me, the reverb and the FX loop is unnecessary. The extra EQ functionality on both channels and the channel switching is nice, but ultimately not necessary either. If you go for the R version or the original version, you'll still get a great unique amp.