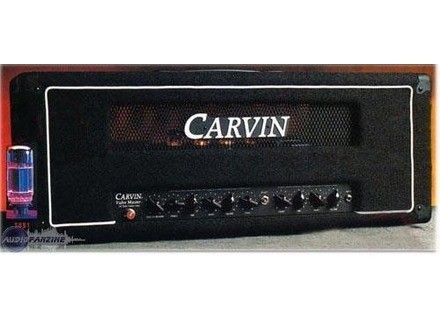 Carvin VM100 Valve Master
5
Having read a few ads about Carvin amps,I had never seriously considered buying one.While shopping in a music store for a guitar,I plugged into a (used)Carvin 212 valvemaster combo. I was shocked at the tone this beast produced.What?,me buy a Carvin? NO WAY!I WAS STUCK ON THE NAME BRAND BUS.I was always taught to study up on a product and check it's reputation before buying . I went home and study I did.And am I glad I did. I went back a week later to buy , but much to my shagrin,IT WAS GONE! Now what? Living in Calif.,I am near 3 Carvin stores and after visiting one ,I found out this amp had been discontinued but given a new suit of clothes and renamed.But I wanted that one! After looKing in the used ads,I found one for $250 (retail is $699) from a guy that never used it. It was a 1995,in all new condition.This thing has TONE!

It is a 2 channel 50/100 watt amp that can use 5881/6L6 or EL34 tubes.It has an effects loop,line out and acoustic presence switch for both channels that adds a brilliance to the high frequencies.Channel 2 has a pull switch for dual voicing;in is a mid boost and out is deeper bass.There is a tremendous amount of gain to be had from this channel that adds endless sustain. 2-12 inch speakers give it a full warm depth and tone.Included also is a 4,8 and 16 ohm switch for separate speaker connections.I think the versatility of this amp is unbeatable.It can be played at low volumes and it still sounds terrific.

I think that the general aesthetics of the amp are somewhat less than pleasing.It has chicken head knobs and black carpet covering.There was not a lot of design in the presentation of the outside as there was on the inside.This model has been redesigned (since 95) with black tolex and round silver knobs and is called the MTS 212.Coming from the old school of amps, I would liked to have seen a vibrato circuit installed.It takes a little patience to dial in a tone that you like,so if your in a hurry and don't want to spend the time twiddling the knobs,than you probably will get frustrated. These controls are not interactive ,which basically means that each knob is independantly heard so the sound is balanced in that the treble and bass blend well without muddying up.You need to study the manual and play it till you FEEL how it operates.Once you get the hang of it, it's like listening to your favorite radio station.

The unit is built with plywood and not pressed wood.This is an advantage as it makes carrying the amp lighter and giving it a better resonance.High quality electronics were used such as precision film resistors to prevent excessive noise.It uses Mylar caps that have a tighter tolreance and help to reduce microphonics.There are no IC'S or transisters ,giving it a purer overall sound. It has a high input impedance of 2.2 megohm which is 2.2 times greater than other amps having 1 meg ohms.This guards against high frequency loss from misloading guitar pickups.The reverb tank is a quality accutronics unit.This is an extremely well engineered piece of equipment.

Having played guitar for 35 yrs and have owned every amp from HOO-DO to VOO-DO, I would hesitate to compare this to another name brand amp as it is so subjective and each amp has it's own special something that draws you to it .For someone on a budget,I would suggest you compare this and other Carvin amps to modern boutique amps that are much costlier and decide for yourself.I think the lack of advertising and endorsements have kept this company hidden and somewhat ignored. They sell without a middle man and can keep the costs down on their product. This amp is a diamond in the rough,and it took me along time to get off the name brand bus and smell the roses.

Mamattt's review (This content has been automatically translated from French)

Carvin VM100 Valve Master
5
100W tube amp based on the architecture of the head X-100B (5 x 12AX7 tubes and 4 x 5881 power tubes).
2 channels: one clean, one each with a lead 3-band EQ and presence.
An effects loop and spring reverb.
and finally a bias control of the lamps (basically manages the gain of the lamps).
Normally associated with the baffle V412 (this is the one I use also with).

Extremely simple configuration it works like most amps!
gives away its a more than respectable. it all depends on what is research, not an amp for large saturations modern but if one seeks a good overdrive or a warm sound great!
the manual is short and concise, for against all in English.

This is not necessarily the sound I'm looking too hot for me. can be typed rather blues.

I have over 10 years but few served as living in apartments and released the group play for quite some time once he has almost never changed and has very few flight hours.
When I bought it brand carvin was found in France (bought in Germany). I tried the marshall and peavey classic, unfortunately I was not experienced enough to be able to correctly identify my needs.
This is a good quality / price ratio. Carvin is a good brand of amps even if it is not necessarily widespread (m'enfin Steve Vai plays it anyway ...) and it can not have the same sound as everyone else.