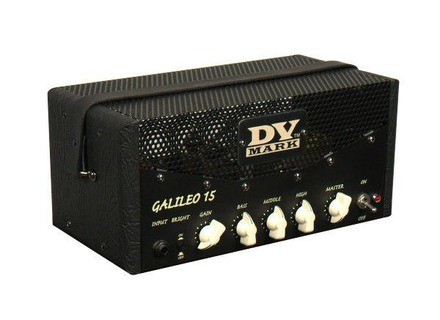 walkeur's review (This content has been automatically translated from French)" Excellent"

There is not much simpler: 1 channel with équalo, gain and volume
No need for manual
It sounds immediately, the settings are fine for équalo, so no trouble finding the millimeter that goes.
For volume, it shows very strong. Amazing for a 15W. 1x concert in a large room I was in at 10am and 9am gain in volume.

You can play at home with a very good sound, no problem. And the higher up the better.

For the moment I play on my HP Tech21 powerEngine60, waiting to buy a real speaker. But already it's great.

Super clean amp with pedals like that.
So you can paste what you want to get the sound you want.

With live guitar:
- = Crystalline strat, but it not pete ears like a fender is a chouille rounder. It is super clean, nothing to the marshall.
- = Ca humbuckers crunch fairly quickly. But it was still enough to mount the volume remaining clean. Should not have after an attack nag. Very nice crunch though.

For effects, everything goes, distos, compressors, wah, modulation, delay. It is super versatile for once. Stay clean with a slight compressor, small chorus, small delay, there is a small crystal clear sound from behind the fagots, a delight!

I used fully for 6 months.
I tried at the same time studiodone Koch, the Hiwatt Custom 7. My opinion is on the forum. In the past I had Fender, Marshall JCM900, and I've tested a lot of amps in the store, vox night train, rivera ... This is one of the best amps that I've played.

Super convenient by its weight, it does not detract from her, on the contrary, it is surprising.
I'm not ready to sell, and I do it again the same choice several times