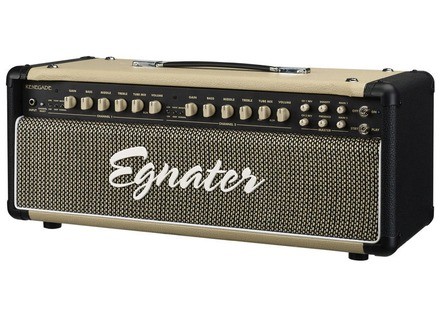 Egnater Renegade Head
4
The Renegade 65 is a staple of Bruce Egnater's recently launched production line of amplifiers, Manufactured in asia under strict tolerances, the Renegade, along with its cousins the Tweaker, the Rebel, and the Tourmaster, represents Egnater's first foray into bang-for-buck vacuum tube amplification.

Sporting two channels with independant EQ controls, as well as wattage, deep/tight, and bright/normal switches, the Renegade shoots for the maximum number of tonal flavors with as few channels as possible. Each channel also has its own volume control, both of which are governed by not one, but TWO global master volume controls, or "Main" as they are labeled on the panel. "Main 2" is footswitchable and when engaged, gives the amp a huge boost in volume and sustain for soaring solos that cut through the mix.

Another great feature of the Renegade, which is a unique Egnater innovation, is the Tube Mix function, which exists separately on each channel. For those unfamiliar, the Tube Mix control routes some or all of the preamp signal to either (in the Renegade) a pair of 6L6's, or a pair of EL34's. Theoretically this makes it possible to douse your tone with either American or British power tube flavor, or any ratio of the two combined.

Adding to the list of pleasant features on the Renegade are global Density (aka Resonance) and Presence controls, as well as dedicated bias test points and adjustment controls on the back for each pair of power tubes.

The Renegade, going through a Seismic 2X12 Cabinet loaded with english-made Celestion Vintage 30's, hit the ground running with great tones on both channels right out of the box. The clean channel is very reminiscent of a Fender Bassman or Marshall JTM-45, which is a fresh departure from the usual clean channel voicing of multi-channel tube amps. I've always been in love with the warm, smooth and sometimes hairy clean tone of the '59 Bassman and the Marshall JTM-45, which have almost identical circuit topology, and I was very pleased that someone took the time to capture this sound in a channel-switching amp.

The overdrive channel features a hot-rodded Marshall style sound with plenty of harmonic detail, yet clear and tight. A lot of upper-mid emphasis on this channel makes it ideal for 80's hard rock with the gain cranked up high, while rolling back the gain conjures up a very convincing plexi-style overdrive, especially with the Tube Mix maxed out in the EL34 direction. Bumping the Tube Mix over to the 6L6 side reveals a little more aggressive bite to the bottom end, while losing the signature EL34 midrange emphasis. The blending of the power tube characteristics is where the Renegade truly finds its unique voice.

The tonestack and mode switches on both channels are very responsive without being overwhelming. The amp is bright but still pleasant to play even with the treble control maxed, and its thick without being boomy when the bass is maxed. To this end, Egnater did a great job of making the controls usable throughout their range. The tones are all great, it's just a matter of dialing them to your personal perfection.

The FX loop is usable, as is the direct-line out, but I know of very few guitarists who utilize the line-out of a tube amplifier, since it cuts a huge part of the tone out of the equation - that being the speaker cabinet and power section.

I've played both my Charvel So-Cal (with coil splitting capability) and my Les Paul through the Renegade, and the Renegade brings it no matter the guitar or its settings.

I have no real complaints about the Renegade. For the price, it is well made, and performs better than amps that cost twice as much. Any complaints regarding quality of construction or components should be quickly buffered by recognizing that it is not a hand-made, boutique guitar amplifier, and by that token, the quality of the Renegade amplifier is pleasantly surprising.

To boot, the head itself is considerably lighter in weight than many comparably sized heads, which is good news for the guitarist with a bad back. Despite its light weight, the headshell appears to be made from actual plywood and not MDF, which will please some quality-minded players.

The tolex covering is not the most durable stuff on the market, so if you plan on gigging with it, expect some wear and tear rather quickly unless you're fanatical about protecting it.

The bias adjustments are pretty much foolproof and can be operated by anyone with a multimeter following some simple instructions without fear of damaging the amp.


The Renegade 65 is an amazingly versatile, well-designed amplifier that has a lot to offer guitarists of all styles and levels.
Did you find this review helpful?yesno
»

Egnater Renegade Head
5
Egnater is a company that prides itself in the module preamp packages. This amp is a 65 watt channel amp that has a stunning sparkling clean tone as well as a high gain to bluesy distortion channel. Get a three band EQ of bass, middle,and treble, as well as a bright and tight switch to alter the amps voicing.

This amp power section has 2 6L6 power tubes into EL 34 power tubes. This gives you a good mix in blend of the mid range EL 34 tubes and the top and bottom range if the 6l6 power tube s. Much like the Mesa boogie mark series amps this is kind of like mixing the simul class power tube section. You also have 5 12ax7 preamp tubes in the preamp section.

The tone of this amp is quite stunning and exceptional. Even at 65 W of power this in packs quite thunderous punch. You have everything from and shiny clean tone all went to the new modern British high gain distortion tone. The mix between the 6l6 power tubes and that EL34 power tubes gives you a nice overall feel in the power tube section. In addition you also have a reverb for each channel which gives you the ability to add in some room dent to your tone.


This amplifier comes under at a new price of $1000. That is an exceptional price for such a high quality highly versatile amplifier. I recommend this amplifier if you need a good multi channel amplifier that has enough versatility to dial in the very perfect tone that you are looking for. With the versatility the power at section this is one of the best sounding amplifiers dial in and match your guitar perfectly.
Did you find this review helpful?yesno
»

Egnater Renegade Head
5
The Egnater Renegade head is a two channel, 65 watt tube amplifier. It utilizes two 6L6’s and two EL34’s. Each channel has a Tube Mix knob enabling the user to blend whatever amount of each pair of tubes they want in each channel. Both channels also feature independent reverb controls, Bright and Tight switches, and a wattage selector (10 watts or 65 watts). The master section has two master volumes, presence and density controls. Besides switching channels, the 4-button footswitch engages the reverb, effects loop, and switches between the two master volumes, which are all assignable to one or both channels. The Renegade also has external bias points making tube swapping effortless.

It is extremely easy to dial in great sounds on the Renegade. All the controls are responsive, and the digital reverb sounds better than the old fashioned spring reverb tanks in most amps. The Bright and Tight switches are a bit subtle, but their affect becomes more obvious the louder the amp is turned up.

I use this amp with a Gibson Les Paul Custom and the Egnater 2x12 cabinet. Both the clean and overdrive channels are excellent on this amp. The clean is one of the best I’ve heard on a two channel amp. The overdrive channel has a very smooth tone; maybe too smooth. The tone seems to be lacking a certain aggressiveness that I like. I wouldn’t call this a high gain amplifier, but there is definitely quite a bit of gain on tap.

This head has a lot of bang for the buck, and sounds a lot better than more expensive heads with fewer features. I would recommend this amp to just about anybody, except for maybe someone who plays primarily metal. However, putting a boost on the overdrive channel or a distortion pedal in the clean channel would definitely do the trick.
Did you find this review helpful?yesno
»

Egnater Renegade Head
4
I think Bruce from Egnater has really done it right with this one. This amp has two channels with a 65 watt power section where you can dial between 6L6 or el34 power tubes. So if you like your clean tones through a 6L6 power section you can dial it that way or a variable mix with the 34's or have it all 34's as well. This same capability is available for channel two. It has your typical EQ section for each channel plus master presence and density controls with on board digital reverb. Also it has two masters so you set up a louder second volume for leads. The back feature a buffered series effects loop, cabinet simulated direct balanced output, and bias points for the tubes. For control at your feet is comes with a four button programmable footpedal.

I found it very easy on channel one to get everything from a nice chimy clean tone to a nice pushed clean tone. Channel one can also get you a nice crunchy tone as well and I tended to keep the tube mix more towards the 6L6 side. Channel two is your more gained out side. To my ear it's more Marshall voiced and has plenty of gain for rock to heavy rock. I'm not sure it suitable for a metal amp. On the second channel I kept the tube mix a mix of 6L6 and el34 leaning a tad towards el34's. I ended up upgrading the tubes and found the info in manual very very helpful and found swapping the tubes and biasing them up to be a breeze. The foot pedal functions very good too and controls much more than just channel switching. It also engages the on-board reverb, effects loop and secondary master volume with channel-assigning switches for all three. Run them on both channels or just the one you choose.

I think this amp has that Egnater tone where it has enough bottom without it being loose and enough top end without being fizzy. I found I gravitated towards the clean side more hitting it with pedals. That's not mean I didn't like the gain side but I would have liked it to be a bit more raw but still it was nice.

The price of this amp is very good considering what you get in quality and tone. Over all it's a very very good bang for the buck.
Did you find this review helpful?yesno
»
Read the 7 user reviews on the Egnater Renegade Head »